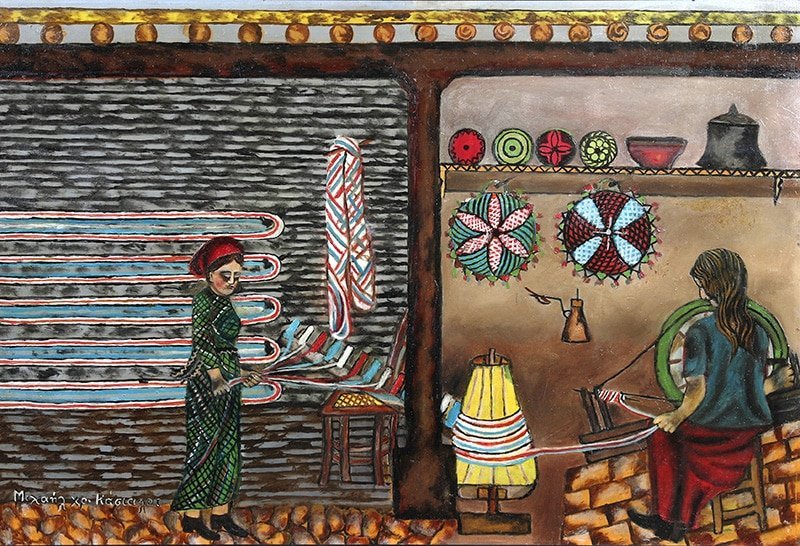 With Black Friday over but still an endless list of Christmas gifts to buy, shopping is on everyone’s mind. And for those seeking a piece of art head to the 25th Psatharis Auction House.

Auctioning works by Greek and Cypriot artists, the sale will take place on Wednesday at the Hilton in Nicosia. A total of 117 artworks will be featured by artists whose work has shaped and influenced con-temporary Greek and Cypriot art. A preview of the collection is open until Wednesday to take a closer look at the pieces before the auction.

“The entire collection of works, stretching from The Secret by Adamantios Diamantis to the Weight Lifter by colourist Glyn Hughes is a visual guide to the evolution of the Greek and Cypriot art of the 20th century,” said Nikos Psatharis, founder of the Psatharis House.

Psatharis said a “steady growth in prices and a renewed interest from Greek and Cypriot investors at home and abroad has led to many paintings, which had been in private hands for decades, finding their way back to the art market.”

Some of the standout pieces include:

Adamantios Diamantis The Secret (oil on canvas, 80 x 60 cm)
First generation Cypriot landscapist and figurative painter Diamantis (1900 – 1994) drew his inspiration from daily life, particularly rural life. The Secret, however, marks a departure from traditional painting. In this unique painting, the artist sets out to explore the geometricity of the form while experimenting with sculptural effects alluding to enduring themes within the art of Henry Moore.

Christoforos Savva Life Line (oil on canvas, 110 x 60 cm)
Christoforos Savva (1924 – 1968) was one of the first painters to reinvent Cypriot Art introducing it to contemporary currents and modernist trends. His work carries influences of French Modernism, Fauv-ism, Cubism and Abstract Art. Life Line was exhibited for the first time in 1968 at the Goethe Institute in Nicosia and, visibly influenced by Matisse, marks a liberating moment for the artist who transcends form to explore pure colour.

Michael Kashalos Woman Pulling Yarn and Woman in the Wardrobe (oil on hardboard, 55 x 856 cm)
This is an exquisite piece of art by leading Cypriot naive artist Michael Kashalos (1885 – 1974). The artist projects his narration through circular forms and parallel lines creating movement in still space. His fe-male figures, which lie in the foreground of the two-dimensional painting, reveal the artist’s desire to depict motion and spontaneity.

Georgios Derpapas Without Title (oil on wood, 115 x 90 cm)
Greek poet Odysseas Elytis described the works of Greek surrealist Georgios Derpapas (1937) as “realms outside of time”. Without Title is a fascinating piece of art. Derpapas creates an unearthly world in which the Byzantine motif which is characteristic of the artist’s works, becomes an integral part of the bold composition.