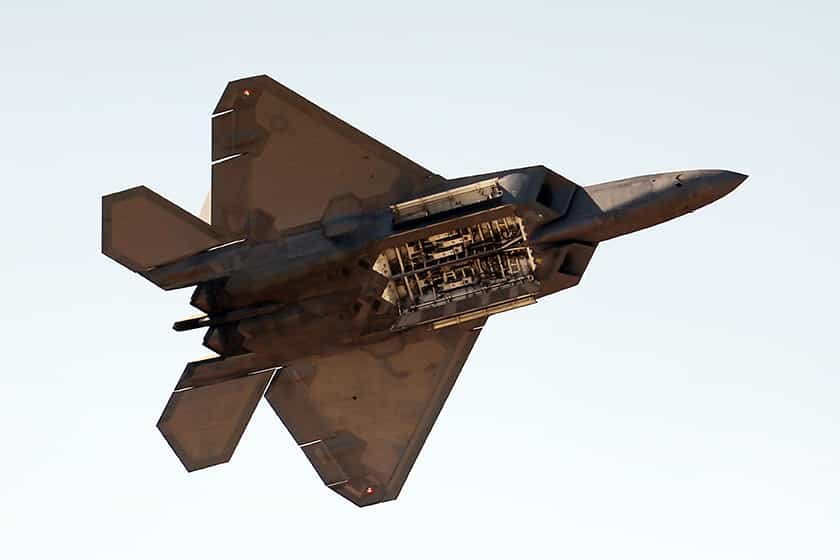 A Lockheed Martin F-22 Raptor in action. The Russians on Wednesday said a US delegation had inspected potential sites for bases in the region and that Washington was engaged in intensive talks with Nicosia on expanding military cooperation

Moscow will respond in case of a military build-up by the US in Cyprus, Russian foreign ministry spokeswoman Maria Zakharova said on Wednesday, warning that such a move would “inevitably lead to dangerous and destabilising consequences” for the island.

Nicosia responded to the threat with a non-confrontational statement merely saying that Foreign Minister Nicos Christodoulides “at his own initiative” had a phone conversation with his Russian counterpart Sergei Lavrov during which they reviewed bilateral Cyprus-Russia relations and “exchanged views on possible ways to further enhance them”. They also discussed the latest developments in the Eastern Mediterranean region, as well as EU-Russia issues and agreed within this context to meet in the next few months.

However, according to Politis earlier, Christodoulides had called Lavrov seeking an explanation, and that the foreign minister had made similar call to the Russian ambassador in Nicosia where he was reportedly told Zakharova was merely responding to a question from a journalist from Russia’s Tass news agency about possible US involvement in Cyprus.

Zakharova said that a US delegation had inspected potential sites for bases in the region and that Washington was engaged in intensive talks with Nicosia on expanding military cooperation.

Citing Zakharova, Russia’s Tass news agency quoted her saying that information was coming from different sources “about Washington’s active actions to ensure the possibility of building up its military presence in Cyprus for countering the growing Russian influence in the region in light of the successful implementation of the operation of the Russian Aerospace Force in Syria”.

President Nicos Anastasiades said on Tuesday he was expecting the US to express in practice its interest in taking part in the existing tripartite cooperation between Greece, Cyprus and Israel. Anastasiades was addressing the 6th Energy Symposium in Nicosia.

“I attribute particular importance in the interest shown on the part of the USA to take part in the trilateral (cooperation mechanism) between Greece, Cyprus and Israel,” he said. “I expect that soon this will be confirmed in practice.”

The US has expressed increased interest in the development of hydrocarbons exploration and exploitation in the region. In addition, it was recently announced that Cyprus would appoint a military attaché in Washington. According to the government, the decision is part of the effort to strengthen bilateral ties between the Republic of Cyprus and the United States and to engage in a “balanced defence diplomacy”.

In a bland written response to Zakharova earlier in the day, government spokesman Prodromos Prodromou said a US military build-up or any militarisation of the island “was never our goal”. The statement from Prodromou did not address the direct threat from Moscow but merely cited the number of times the island had facilitated some other countries with the use of the Paphos airbase, ports and airports but only for humanitarian reasons.

He said last year the Republic granted such facilities in 672 cases at the island’s airports and 225 instances at the ports. Up until October 29 this year, facilities were granted at airports in 212 cases, and at the ports, in 207 cases.

After decades of close ties, relations with Moscow have become strained over the past two years in several respects due to tighter controls in the financial sector from US sanctions, and the Bill Browder case, in conjunction with international attitudes towards Moscow due to its involvement in Syria, the Skripal poisoning case in the UK, and alleged Russian hacking of the 2016 US election, all of which have not left Cyprus’ relations with Russia untouched.

Thousands of Russians live in Cyprus and some have purchased controversial ‘golden visas’. Russia is also the island’s second-biggest tourism source.

Russian ambassador to Cyprus Stanislav Osadchiy has not been shy in making Moscow’s feelings known of late, issuing warnings that bilateral relations will suffer following frequent meetings he has with Greek Cypriot politicians, though none have openly criticised him for allegedly interfering, especially in the Cyprus issue. Russia has always been a strong supporter of the Greek Cypriot side in its capacity as one of the five permanent members of the UN Security Council.

However, analysts perceive that Moscow is not in favour of a solution that might involve any role by Nato in a post-solution Cyprus such as might be implemented in place of the Turkish guarantees. Osadchiy did draw fire last year by attending – the only diplomat on the island to do so – a seminar organised by some of the rejectionist parties, and this year the Russian embassy issued a statement rapping ruling Disy leader Averof Neophytou after he said in an interview that Russia, was looking towards Turkey for political and energy reasons. The Disy chief also reiterated his party’s position that Cyprus belonged to the West.

Moscow later reiterated that, despite its initial reaction, its long-standing stance on Cyprus had not changed. This, as Osadchiy has repeatedly said, is a solution reached by both sides without outside interference, meaning the West.

“Apparently, some partners of the Republic of Cyprus would like to drive a wedge between Russia and Cyprus in order to deter Russia in the Eastern Mediterranean region,” the Russian embassy said, also hinting that its own relations with Ankara could benefit Cyprus.

Earlier this month, Osadchiy said that EU sanctions against his country and a Central Bank of Cyprus (CBC) crackdown on shell companies had led to the closure of thousands of bank accounts belonging to Russians and the departure of companies from the island. He expressed hope that the obstacles in the relations between the two countries would soon be overcome.

Last year, the ambassador also warned that Cyprus’ relations with Russia suffered after Hermitage Capital founder Bill Browder resorted to Cypriot justice and was granted an injunction to prevent Nicosia prosecutors cooperating with their counterparts in Moscow. Since then, in October this year, following international pressure, especially from Europe, Cyprus suspended cooperation with Russia in the Browder case.

More recently, Osadchiy said that if the Church of Cyprus sided with the Ecumenical Patriarch Bartholomew of Constantinople who has supported Ukrainian demands for an independent Orthodox church, this would affect relations between Russia and Cyprus, at least psychologically.

Giving dance a touch of drama