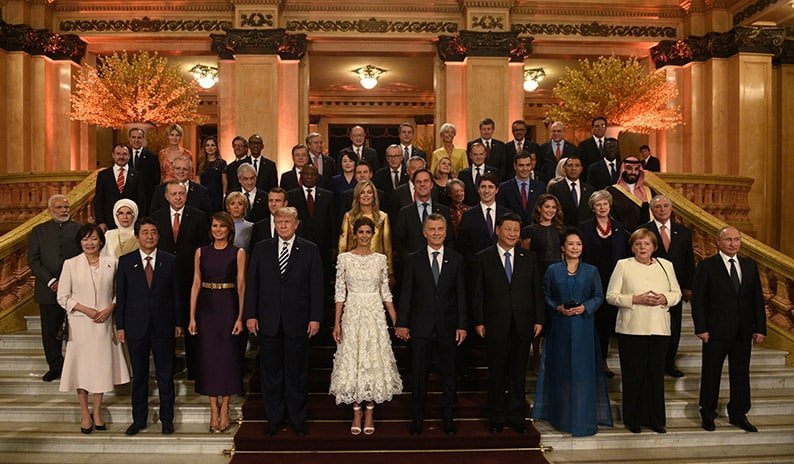 World leaders heading home after the weekend G20 might be justified in breathing brief sighs of relief. Unlike at the Asia Pacific Economic Cooperation summit two weeks ago, the heads of state were able to agree on a joint communiqué. A landmark meeting between US President Donald Trump and Chinese counterpart Xi Jinping was claimed a success by both sides, avoiding further escalation of their trade war – at least for now.

Those broadly positive headlines, however, are only half the picture. For all the efforts to keep it on track, the meeting in Buenos Aires also served to showcase an alarming rise in the number of international differences. From French President Emmanuel Macron squaring up against Saudi Arabian Crown Prince Mohammed bin Salman to Trump snubbing Russian President Vladimir Putin, a growing number of leaders appeared openly hostile or dismissive of each other. The primary diplomatic breakthrough of the summit – a joint declaration to reform the World Trade Organisation – may simply be a precursor to more arguments. While most nations do want changes at the WTO, US-China tensions make it unlikely there’ll be agreement on how to do so.

Pointedly, a forum designed as one of the world’s leading venues for international diplomacy struggled to get the word “multilateralism” into the communiqué for fear of offending leaders such as Trump. Much of the diplomatic effort, insiders said, revolved around avoiding growing taboos of major countries, particularly the United States and China. (The eventual communiqué managed a reference to the “multilateral trading system” but followed it by stressing the need for reform at the request of US negotiators.)

Coming amid multiple overlapping international crises, this was in many respects the most important G20 since that in London in April 2009. Then, world leaders found common ground in agreeing on a joint approach following the global financial crash the previous year. This time, those present – particularly from the West’s largest democracies – were likely more preoccupied with political dramas at home. Even as he met other foreign leaders, Macron was being told of France’s most violent street protests in decades. British Prime Minister Theresa May is reaching the crunch point on getting her Brexit deal through parliament, with speculation rife her government might collapse. Trump was spending time on angry tweets about the latest developments in special counsel Robert Mueller’s investigation of Russian involvement in the 2016 US presidential election.

A grinning, enthusiastic handshake between Putin and Saudi Arabia’s bin Salman appeared to tell a different story – this one about how the world’s increasingly repressive autocratic states are standing together. There’s clearly an element of truth in that. At the same time, however, the autocrats also find themselves under mounting pressure. Like many of his Western counterparts, Putin finds his domestic approval ratings falling in the face of Russia’s economic problems, and it’s unclear how his picking fights with countries like Ukraine can alter that dynamic. Riyadh, meanwhile, has suffered significant diplomatic fallout from the killing of journalist Jamal Khashoggi in the Saudi consulate in Istanbul.

Nor are the autocratic leaders a simple defined bloc – and Turkish President Tayyip Erdogan is clearly at ever greater loggerheads with Saudi Arabia, even as his administration moves closer to Putin’s Russia. It seems like there are ever more moving parts to international relations, and mutual antagonism continues to grow in many of those bilateral relationships.

For all Trump’s challenges with the Russia probe at home, the G20 was a broadly successful trip for the US president. A communiqué reference to refugees and migration was removed at US request, Trump signed a revised trade deal with his Mexican and Canadian counterparts, and Washington again avoided any commitments on climate change. While the group recommitted itself to a vaguely defined “rules-based system”, Chinese and other attempts to condemn “protectionism” – a thinly veiled reference to Trump’s tariffs – also failed to find a place.

Despite Trump’s intransigence on various issues, other major world leaders still seem keen to woo him. Japanese Prime Minister Shinzo Abe went particularly out of his way to flatter POTUS, congratulating him on his “historic victory” in the US midterms despite the Republican loss of the House of Representatives. China’s Xi appeared conciliatory, while the Kremlin’s mild statement of “regret” about the cancellation of the Trump-Putin meeting demonstrated just how much Moscow wishes to keep dialogue with the US open.

The Trump administration is now hoping for another diplomatic breakthrough early next year at another meeting with North Korean leader Kim Jong Un. Even a temporary improvement in Washington-Beijing relations could help that process. Trump tweeted Monday he also hoped for a trilateral meeting with Xi and Putin in the near future to “start talking about a meaningful halt to what has become a major and uncontrollable arms race”.

How long that spirit will last is an open question. The Xi-Trump meeting saw the US agree to delay new tariffs scheduled for January 1 by 90 days, while China pledged to buy US crops and other goods and crack down on Chinese-made opiates feeding the US domestic drug crisis. However, there are already signs that tariffs and tensions could soon rise again. There were small but notable differences between the US and Chinese post-meeting readouts, and much will depend on what happens in the coming weeks. One crude but simple bellwether will be whether maritime confrontations in the South China Sea increase or decline.

After a year that has seen almost every key international relationship deteriorate, the Argentina meeting could have gone much worse. But almost every leader there has returned to major domestic headwinds. When the next G20 meeting rolls around in Japan in June, successful multilateral diplomacy may yet be harder still.

Peter Apps is Reuters global affairs columnist. Paralysed by a war-zone car smash in 2006, he also blogs about his disability. Since 2016, he has been a member of the British Army Reserve and the UK Labour Party

Our View: The rocky road to local govt reform