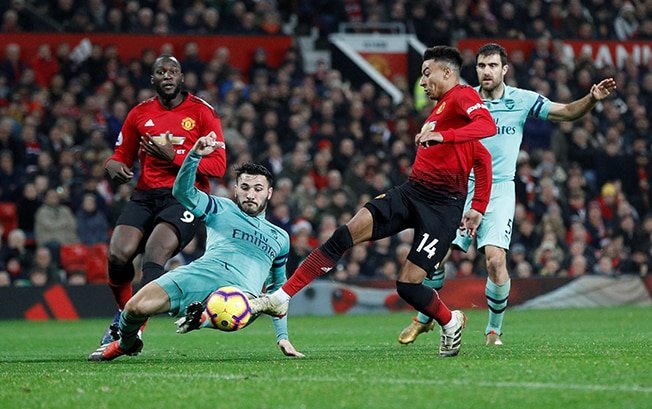 Man United and Arsenal drew 2-2 at Old Trafford, with neither side's defence inspiring much confidence

Manchester United twice came from a goal behind to draw 2-2 with Arsenal on Wednesday and deny the visitors a first win in 12 Premier League games at Old Trafford.

The first clash between the old rivals since 1986 not featuring either Alex Ferguson or Arsene Wenger in the dugout was a pulsating contest which Unai Emery’s Arsenal will feel they should have won.

A dreadful mistake by United keeper David de Gea allowed Arsenal to draw first blood after 26 minutes as Shkodran Mustafi’s downward header bounced up and through the Spanish keeper’s hands — the ball just crossing the line despite the attempt of Ander Herrera to hack clear.

Arsenal went back in front in the 68th minute, Alexandre Lacazette being credited with the goal after Rojo’s attempted tackle saw the ball ricochet past De Gea.

This time the lead lasted a matter of seconds as United replied with Jesse Lingard sliding the ball under Leno after a lapse in concentration by Sead Kolasinac.

Arsenal came close to winning the game on several occasions but De Gea made up for his error with some fine saves.

The Gunners, who slipped to fifth place, are now unbeaten in their last 20 games in all competitions while United are in eight place, eight points off the top four.

Ruben Loftus-Cheek gave the visitors a halftime lead but two goals in four minutes from Raul Jimenez and Jota turned the match in favour of the hosts, who claimed their first win in two months.

Chelsea trail league leaders Manchester City by 10 points and will host Pep Guardiola’s side on Saturday, while Wolves climb to 12th and will be relieved to have brought their horror run of form to an end.

Chelsea went ahead on 18 minutes when Loftus-Cheek scored for the second match in a row, his shot from outside the box deflected into the Wolves goal by the head of home captain Conor Coady.

The visitors had a strong call for a penalty turned down minutes after halftime when Alvaro Morata was clattered from behind as he seemed destined to score but it was the home side who found the back of the net on the hour-mark.

The impressive Morgan Gibbs-White fed Jimenez, who had a lot to do from a tight angle but drilled the ball past Chelsea keeper Kepa Arrizabalaga.

Four minutes later the home side were ahead when Matt Doherty provided a low cross that was tapped in at the back post by Jota.

Liverpool staged a superb second-half revival to come back from a goal down and beat Burnley 3-1 in the Premier League at Turf Moor on Wednesday.

Making seven changes to the team that started Sunday’s win over Everton, Reds boss Juergen Klopp soon had to make another as defender Joe Gomez was replaced by Trent Alexander-Arnold after a first-half clash with Burnley captain Ben Mee.

The visitors struggled to break down Burnley and it was the home side who came closest to breaking the deadlock, but a superb volley from Ashley Barnes late in the half was ruled out for offside.

Jack Cork gave Burnley the lead early in the second half, scuffing the ball into the net in the 54th minute as Liverpool keeper Alisson failed to get it under control from a corner.

James Milner put Liverpool back on level terms eight minutes later, rifling a low bouncing shot from the edge of the box into the bottom corner past an unsighted Joe Hart in the Burnley goal.

Klopp brought on Mohamed Salah and Roberto Firmino and the visitors quickly went ahead through a brilliantly-worked set piece, Virgil van Dijk cleverly squaring a free kick into the path of Firmino, who tapped the ball into an empty net.

With Burnley throwing everything forward in the dying minutes to try to secure a point, Liverpool broke up the field and Salah teed up Xherdan Shaqiri, who fired a first-time shot past Hart in stoppage time.

Liverpool remained unbeaten and in second place on 39 points after 15 games while Burnley stayed in the relegation zone on nine points.

Tottenham Hotspur bounced back in emphatic fashion from their derby defeat by Arsenal at the weekend with a comfortable and efficient 3-1 win over Southampton in the Premier League on Wednesday.

Watching in the stands at Wembley Stadium was new Southampton boss Ralph Hasenhuettl who will officially take charge on Thursday and there seemed to be a renewed energy from those on the pitch to impress their manager.

The visitors, however, were behind after only eight minutes when a short Spurs corner led to Christian Eriksen hitting a low cross into the box which was tucked away by Harry Kane for the England captain’s ninth league goal of the season.

Spurs doubled their lead shortly after halftime, again from a corner. The ball fell to Lucas Moura whose first attempt was blocked but the rebound bounced back for him to hit it into the ground and beyond Saints goalkeeper Alex McCarthy.

Southampton’s misery was compounded three minutes later. Kieran Trippier chased down Saints defender Matt Targett and the ball came to Kane who crossed it into the box for Son Heung-min to score only his second league goal of the season.

Mauricio Pochettino’s side, who are third on 33 points, never looked like they needed to reach top gear to close out the win, despite conceding a consolation goal from substitute Charlie Austin in stoppage time.

Former RB Leipzig boss Hasenhuettl will have seen enough to realise the scale of the rescue mission for his new side who remain 18th in the standings with nine points after 15 games.

Fulham moved off the bottom of the Premier League with a 1-1 draw against Leicester City on Wednesday but will rue being unable to hold on to their lead and secure their first clean sheet of the season.

Fulham manager Claudio Ranieri had his name sung by the visiting supporters, having guided Leicester to the Premier League title in 2016.

But it was the home fans who were the loudest three minutes before halftime as Aboubakar Kamara fired home an angled shot after being played in by Aleksandar Mitrovic to give Fulham the lead.

Fulham went into the game with the worst goal difference in the league having conceded 35 goals in 14 matches. But they peppered Kasper Schmeichel’s goal with shots, registering 23 attempts.

They were made to pay for their profligacy when James Maddison found the bottom left corner after 74 minutes, his second goal in as many games.

Fulham are the only side in England’s four professional divisions yet to keep a clean sheet this season but they remain unbeaten at home under Ranieri and moved up to 18th in the table, one point off the safety zone.

Leicester are eighth and have not lost in seven matches in all competitions.

Newcastle finally registered a goal at Goodison Park as they earned a useful away point with a 1-1 draw against Everton on Wednesday to bounce back from their weekend defeat by West Ham United.

They had lost on their last five Premier League trips to Everton without scoring but took the lead after 19 minutes when Salomon Rondon lashed past Jordan Pickford.

Everton responded to dominate the rest of the half and were shouting for a penalty after a challenge on Ademola Lookman.

Richarlison had an effort saved but from the resulting corner the Brazilian stabbed home at the far post.

Everton looked the more likely winners but it was Newcastle who went close twice late on with Christian Atsu guilty of wasting a glorious chance for the visitors, shooting straight at Pickford as the clock reached 90 minutes.

Newcastle are still looking for their first win at Everton since 2010.

A series of blunders that lost us the halloumi trademark