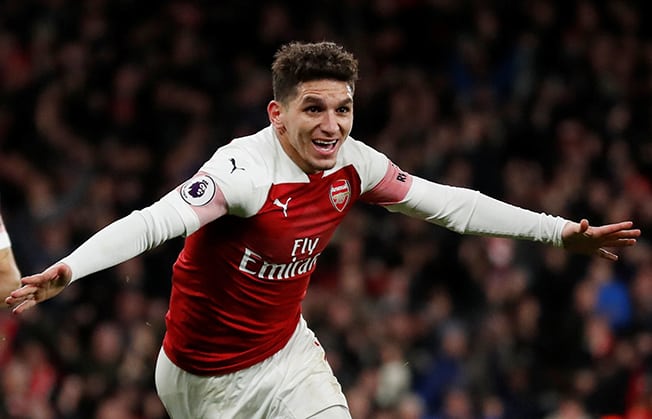 Lucas Torreira scored with a bicycle kick in the 82nd minute to earn Arsenal a 1-0 win over Huddersfield Town in a scrappy Premier League game on Saturday.

The Uruguayan leapt to volley the ball from a Pierre-Emerick Aubameyang pass across the face of goal, securing all three points for the Gunners who otherwise only distinguished themselves by having three players booked for diving.

The first half was a comedy of errors for Arsenal, with strikers Aubameyang and Alexandre Lacazette missing clear scoring opportunities and midfield lynchpin Granit Xhaka frequently passing the ball straight to the opposition.

Referee Paul Tierney dished out seven yellow cards in the half, and nine in the whole match. Arsenal‘s Xhaka, Shkodran Mustafi and Matteo Guendouzi were all booked for simulation.

Lacazette appeared to break the stalemate just before halftime, latching on to a sloppy backpass and sidestepping keeper Jonas Lossl to slot the ball into the net, only to be ruled offside. Lossl then tipped a Torreira shot from outside the area just over the bar.

Huddersfield, who have not beaten Arsenal since 1971, were unable to register a shot on goal.

In the end, it fell to a moment of acrobatics from the little Uruguayan to rob the visitors of a much-needed point.

Arsenal climbed to third in the table ahead of Chelsea and Tottenham Hotspur’s matches later on Saturday, while Huddersfield slipped back into the relegation zone, in 18th place.

Elsewhere, Manchester United earned their first Premier League win in five games with a comfortable 4-1 victory over bottom side Fulham at Old Trafford on Saturday.

With Paul Pogba on the bench once more, United wasted no time in finding their rhythm, as Ashley Young scored his first goal in all competitons for United since 2017 to break the deadlock in the 13th minute.

Juan Mata then stroked home a second to score his 50th Premier League goal in the 28th minute, before Romelu Lukaku scored his first home goal since March to make it 3-0 shorltly before halftime.

Coming into the encounter with a negative goal difference, United were in need of a confidence-building performance and a contest against the Premier League’s most porous defence was just what the doctor ordered.

Finally, in-form West Ham continued their fine recent form with a 3-2 come-from-behind derby win at home to Crystal Palace, while James Tarkowski’s first-half goal secured Burnley their first win in nine Premier League games as they won 1-0 at home to Brighton to move out of the relegation zone.

Talk of esports in Olympic Games is premature-IOC