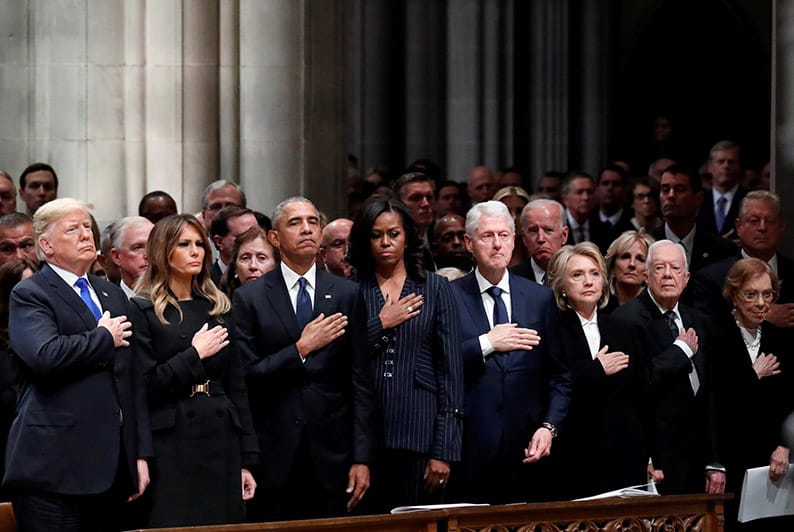 Unlike those who succeeded him, George WH Bush can be compared favourably to the greatest of modern US presidents

President George WH Bush died peacefully aged 94 last week surrounded by family and friends including James Baker his friend and former secretary of state. His son, President George W Bush, delivered a eulogy at his funeral that was funny and dignified and touching.

In the front pew from right to left sat presidents Donald Trump, Barack Obama, Bill Clinton and Jimmy Carter, who is still going strong this side of the grave. The wives were there too. Melania sat next to Barack, Michelle next Bill and Hillary next to Jimmy Carter. Decorum was maintained, although there were no pleasantries between Trump and the Clintons. Trump stared ahead at infinity in a pout while the Clintons looked the other way.

The office of president is revered in the US to a fault but some presidents are revered more than others. George Bush Senior was well qualified to be president, being patrician at home and well versed in international affairs. Before he became president he had been US ambassador at the UN, director of the Central Intelligence Agency and an active vice president in the Ronald Reagan administration. Unfortunately, he had a poor grasp of economics and what he called the ‘vision thing’ and lost to Bill Clinton in 1992 who famously adopted ‘it’s the economy, stupid’ as his election slogan.

Previously, however, cometh the hour cometh the man, because Bush was precisely the right president to be at the helm in the US between 1988 and 1992 during the disintegration of the Soviet Union and the right commander in chief to build an alliance to reverse Saddam Hussain’s invasion of Kuwait in 1991.

One of recent history’s great ‘what ifs’ is how different the Middle East would be today if Bush had proceeded to take Baghdad. But he knew better and it is to his credit that he resisted removing Saddam Hussain. He showed a lot more respect for international law than his son in 2003 when US and Britain invaded Iraq unlawfully for the covert purpose of regime change.

The phrase ‘office of president’ is hugely important in American constitutional law. It derives from the oath ‘to execute the office of president and to protect and preserve and defend the Constitution of the US’. The words of the oath are meaningful because although the president is extremely powerful his powers are subject to the law of the constitution in contradistinction to the whim and caprice of the divine right of kings.

In Cyprus, the presidential oath is a solemn affirmation of ‘faith to, and respect for, the Constitution’. The words of the oath are in grave need of amendment since requiring presidents at the outset of their presidency to keep faith with a constitution, huge chunks of which are in suspended animation is economical with the actualite and embarrassing to the office of president.

The modern status of the US presidency as the source of enormous federal and international power began with President Franklin Roosevelt who was elected to the office in 1933 during the Great Depression which he sorted with the New Deal that introduced federal intervention to help people back to work by infrastructure projects, that were thought of as socialist in super capitalist America.

His wife Eleanor Roosevelt was ahead of her time too. She championed women’s rights and the rights of Jewish and black people, and although her marriage to the president had its problems she and her husband were a formidable couple. They launched the modern White House as we know it – not just metaphorically but practically too because the West Wing and the Oval Office were extensions constructed to accommodate Roosevelt’s disability that required him to use a wheelchair.

Roosevelt was paralysed from the waist down after he was struck by polio aged 39 before he became president. Despite his disability, he won four elections. He was president during most of World War II and although America was initially reluctant to join the war Roosevelt had no choice but to declare war on Japan after the attack on Pearl Harbour in December 1942 that led to America’s entry into the war against the Axis powers: Japan, Nazi Germany and Fascist Italy.

This was not as easy as it seems nowadays when we think of the US as being ubiquitous in world affairs. American public opinion regarding both world wars last century was isolationist and against US participation in Europe’s squabbles.

Roosevelt was succeeded by Harry Truman whose claim to fame was to authorise the use of two atom bombs on Japan to end the war in the Pacific quickly but at a terrible cost to civilian lives in Japan.

There then followed the presidency of Dwight Eisenhower during which the Cold War intensified after the Soviet Union acquired nuclear weapons. Eisenhower was a safe pair of hands having been Supreme Allied Commander in Europe during the D Day landings and the advance to Berlin. He knew the imperial pretensions of the British and French very well which came in handy during the Suez Crisis in 1956 when as president he condemned the British, French and Israeli attack on Egypt and forced them to withdraw.

In their way presidents, John Kennedy and Lyndon Johnson did the office of president proud during a very difficult decade in the 1960s. But President Richard Nixon who succeeded Johnson was forced to resign owing to his involvement in a cover-up in the Watergate scandal.

Having seen Nixon’s interviews with David Frost and Nixon the film starring Anthony Hopkins and scenes from the opera Nixon in China, however, a picture of the man emerges that is not unsympathetic.

I know that Ronald Reagan is the most loved president in American but next after Roosevelt Nixon remains the most fascinating. He had been Eisenhower’s vice president for eight years and had been elected to a second term before his ignominious downfall. He was a lot smarter in the first televised debate with John Kennedy but forgot to shave so did not look as smart as his opponent.

Nixon’s major foreign policy achievement, assisted by Henry Kissinger, whom he appointed first as national security adviser and then secretary of state, was the thaw in relations with the People’s Republic of China as a bulwark against Soviet power. It was a diplomatic master move which, together with his decision to pull out of Vietnam, was made possible by his unique grasp of foreign affairs and seriousness of purpose as president.

However, as head of government and head of state with the duty to protect, preserve and defend the constitution, a president must not abuse or misuse power or pervert the course of justice and it is generally accepted that Nixon messed up and resigned to avoid impeachment.

But no one could accuse Nixon of making the office of president the laughing stock of the world the way that presidents Clinton, Bush Junior and Trump have done. Having sexual relations with a young intern in the Oval Office, lying about weapons of mass destruction and tweeting nonsense and gibberish every day are more lethal to the office of president than any of Nixon’s lapses during Watergate.

But this weekend spare a thought for the holder of the office of prime minister in Britain as she faces Britain’s most serious parliamentary crisis in living memory.

The Brexit deal and the betrayal of Britain