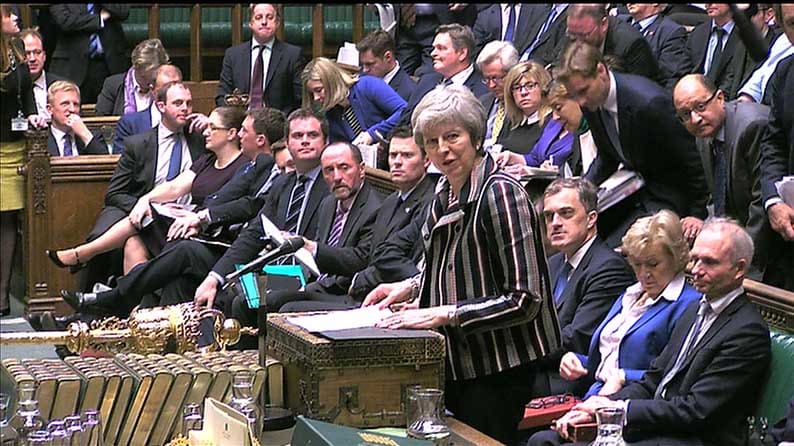 Britain's Prime Minister Theresa May makes a statement in the House of Commons, London, Britain November 26, 2018. Parliament TV handout via REUTERS FOR EDITORIAL USE ONLY. NOT FOR SALE FOR MARKETING OR ADVERTISING CAMPAIGNS

Almost fifty years ago the UK’s Foreign Office wrote an internal memo saying that Britain’s proposed joining of the EEC was meant to lead towards its absorption in the European superstate that France and Germany had been planning since the 1940s.

That political fact, however, was to be hidden from the public, disguised as merely economic co-operation, so that by the time people realised what was happening it would be too late to stop it. The continental powers were in fact engaged in much the same subterfuge, as the European Project itself had been likewise veiled in its ultimate ambition.

Besides the fact that the said document adequately informs any understanding of what has proceeded to pass in the intervening decades, it also springs to mind when considering the current state of Brexit, which, as proposed by British Prime Minister Theresa May, is unrecognisable to those who dramatically won the referendum vote in 2016.

For it represents something much closer to Remain (in the EU) rather than Leave, indeed prospectively locking the UK into even greater subservience than the electorate rejected. Those 17.4m voters and any others respecting the democratic outcome are entitled now to feel angry and disenfranchised.

What was portrayed in the 1970s as a Common Market, essentially a trading area, was actually an evolutionary protectionist construct vis-à-vis the rest of the world, becoming the European Union in 1993 when the underlying political project came more to the fore.

That resulted from the crucial Maastricht Treaty of 1992, not sanctioned by any referendum in the UK to discover either the wish or consent of the populace. The John Major government pressed resolutely ahead despite much parliamentary protest from eurosceptics who did understand the historic significance.

Nor did any meaningful obstruction arise later as the Franco-German motor pursued the ‘ever closer union’ always intended to be a political federation. The UK effectively endorsed the plan whilst either gently resisting its most outlandish attempts to advance centralisation, or pretending to bring influence.  In truth, Britain’s role was only ever to subordinate itself to and subsidise what was plainly a predetermined, continental programme.

The EU has evidently never entertained any other modus operandi than a forward march to its planned destiny, admitting of neither a backward step or other reconsideration.  Likened occasionally, and not altogether spuriously, to the Soviet Union, it clearly has Marxist overtones in that regard.

By the mid-2000s the European Project’s proponents were ready to implement a United States of Europe, a deliberate counterweight to the USA. Its foundation would enact an irreversible manoeuvre into statehood. The pretence of member states sharing sovereignty amounted in reality to submission to an overarching supranational structure, with the Commission in Brussels performing its puppetry as a government, while subject to the axis of Berlin and Paris pulling the strings.

The people of this continent that was trying to become a country, however, had noticed, and many did not altogether favour the proposed arrangements, overriding their national democracies.  Elitist technocracy was not really the preference of these recalcitrants, who were to be derided officially as populists.

While the self-regarding leaders of the project periodically sought the veneer of respectability through compliant referendums around Europe, such endorsements were already stuttering in their delivery, with setbacks recorded in various national votes in Denmark, Ireland, the Netherlands and even in France.

In the UK, meanwhile, the Tony Blair administration continued the tradition of trying shamelessly to pull the wool over everyone’s eyes, even denying a referendum to affirm the passage of the truly ground-breaking European constitutional treaty devised in 2004.

So it was that Prime Minister Gordon Brown signed the Lisbon Treaty (as it was necessarily reframed) in 2007 away from the public gaze, traipsing off to Portugal later than his counterparts in quiet recognition of the offensiveness of the momentous commitment to consign Britain’s independence deeper still into the dustbin of history.

This incremental approach to conniving with the EU’s end-game of course eventually ran into trouble when several years of mass migration from Eastern Europe was identified by UKIP, under the leadership of Nigel Farage, as directly related to EU membership itself.

UKIP, remarkably, won the 2014 national elections to the European Parliament on the basis of proportional representation. The competition for lower-skilled work, the growing pressure on public services, and the visible cultural shift taking place across the country had exposed the UK government’s collusion in a cross-border mash-up of European citizenry.

Ordinary men and women were suddenly aware that the EU – with its four supposedly sacrosanct freedoms of movement (of goods, services, capital and labour) – created an imposition of what they considered alien control.  Increasingly, many despised it.

Thus came the 2016 referendum vote and its fevered legacy. The general election of 2017, which PM May called in a vain attempt to boost her own position, then apparently reiterated the public’s message, with both main parties profiting from posting manifestos supporting the Brexit vote.

Yet, the resulting Conservative government, under May’s very singular direction, has continued true to form in deferring to the EU, while posturing differently. The opposition Labour party has kept a shifting and obfuscating stance too, unsure in its opportunistic handling of the situation.

What could not be plainer, however, is that reclaiming national independence as Leave wanted has receded off the agenda (if ever really adopted). The emphasis is on staying closely aligned to the EU for the sake of not upsetting the economy in terms of jobs or vested interests.

Like the other member states, the UK has been immersed in the EU so deeply, commercially and legally, that rupturing the status quo appears a bridge too far. Remaining in the EU in all but name is the next most comfortable option, for parliamentarians at least, other than simply staying in the bloc.

Using the comparative closeness of the referendum result (52:48), they claimed a ‘soft’ Brexit was better than a ‘hard’ one. That really meant that a dirty, ‘half-in, half-out’ Brexit was preferred to a clean break, besides allowing for the result potentially to be overturned sooner or later.

MPs even announced to the world that they wouldn’t allow a no-deal scenario, treacherously handing a massive advantage to the EU, so that it could safely offer nothing but a bad deal (again creating the conditions for an outright reversal).

The Treasury moreover refused to devote serious resources for the no-deal choice, whereby the UK would operate simply on WTO terms (as does the rest of the world without trade agreements in place).  The UK thus entered a fight, hardly a negotiation, with the EU, with its hands tied behind its back.

So we’ve now reached the point where the British premier – having secured a one-sided compromise – now sides with her European counterparts to try to foist oppressive terms on the UK, despite their evident defiance of the meaning of Brexit, namely to repatriate control.

By the clause of the Withdrawal Agreement that would give the EU veto over the UK ever departing the customs union, the UK would be even more in than it was, tantamount to a coup d’etat over the British electorate.  It is that authority which parliament is being cajoled into granting at its so-called ‘meaningful’ vote on December 11.

And, echoing the original civil service notion of binding the country into the project regardless of the popular will, what Theresa May wants everyone to believe is that the path is irredeemably set. Whether her fellow politicians comply or not, what ordinary, reasonable people think about that is pretty much unprintable.

Talk lately is of the deal, roundly condemned as turning the UK into a captured colony of the EU, being defeated, to be followed by the fall of the prime minister, and perhaps a general election, or maybe a second referendum (laughably marketed as the People’s Vote, as if the original plebiscite wasn’t).

It should be obvious to all, then, that Mrs May is not fit for the office of premier, if she ever was. Her so-called deal, binding only in disadvantaging the UK, and non-binding in the Political Declaration of a trade pact that may never materialise, does indeed amount to a betrayal.

Moreover, having been steadily giving away sovereignty to the EU on the nod for years, parliament might definitively usurp what is only anyway held in trust from the people, effectively bringing itself thoroughly into disrepute.

Furthermore, any re-run of the referendum, as mooted, would send bitterness and dissension off the scale, even inviting civil disorder in what has been a remarkably peaceable nation. If the first referendum is not to be honoured and enacted, why should anyone respect a second, clearly primed to reverse the initial vote, when policy has in the interim been in the hands of a Remainer prime minister and deputies, a Remainer finance minister and Treasury, a Remainer cabinet, government and parliament, and Remainer establishment (including manifestly the Bank of England)?

It would not be the end of the matter, but the beginning of something, very much uglier. It is not only in the UK, after all, that the enduring machinations of the elite are confronting the challenge of non-compliant mainstream opinion.

The EU faces its own trials and tribulations in the inherent dysfunctionality of the eurozone, the continuation of the migration issue, and the perceived authoritarianism of the unelected officials commanding the whole project.

The UK, the fifth-largest economy in the world and historically a bastion of freedom and democracy, is on the cusp of humiliating itself for this gargantuan vanity project of chauvinistic Europeanism, itself a stepping-stone to the grander plan still of global technocratic governance, a form of world government.  Seemingly, the wishes of Middle Britain (and incidentally Middle America) are not to be allowed to stand in the way of the New World Order, the ‘rules-based, multi-polar’ environment under the control of a self-appointed, self-professedly internationalist cadre.

That humiliation, though, comes at the hands of the country’s own political leadership (for want of a better word), seeking to entrench a pitiful servitude to continental imperialism. If the national mood turns into populist rebellion, then it will, unfortunately, be merited, provoked by those complicit in a long-lived and very determined conspiracy.

For the political classes conferred on themselves an entitlement that flowed from thinking – arrogantly and ignorantly – that they knew better. Events have already demonstrated, it might very well be said, that they really, really didn’t and don’t.

Expat View: No regard for non-Orthodox residents

A time to reflect on the office of president