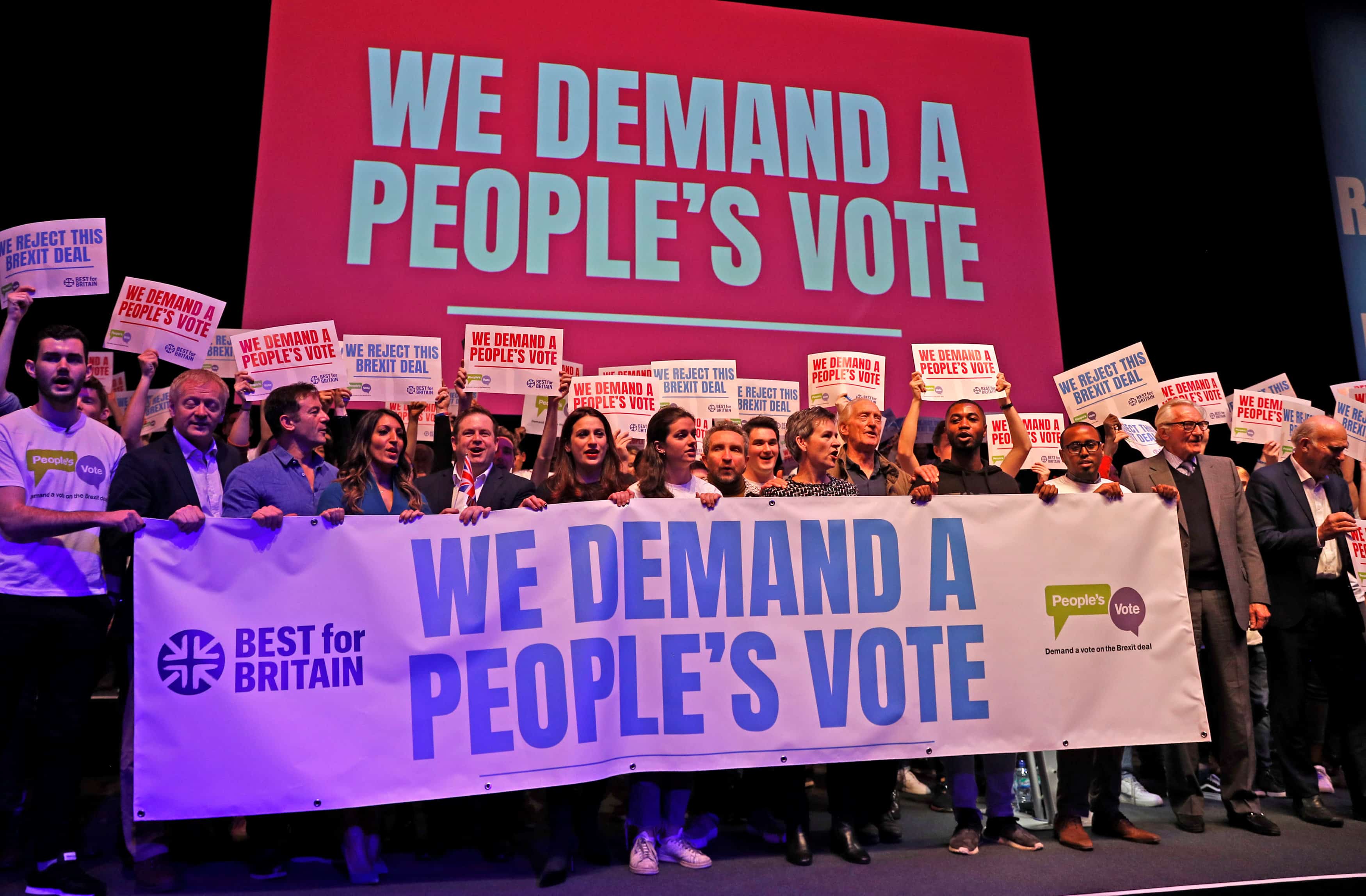 Pro-EU supporters take to the stage at a joint political rally by Best for Britain and the People's Vote campaign in London,

The European Union’s top court ruled on Monday that the British government may reverse its decision to leave the bloc without consulting other member states in a decision welcomed by those campaigning to stop Brexit.

In an emergency judgment delivered just a day before the British parliament is due to vote on a Brexit deal agreed with the EU by Prime Minister Theresa May, the Court of Justice (ECJ) said: “The United Kingdom is free to revoke unilaterally the notification of its intention to withdraw from the EU.”

The ruling is in line with an opinion delivered last week by a Court legal adviser. That had boosted the hopes of British Brexit opponents that a new referendum could be held that would prevent Britain’s scheduled departure on March 29, 2019.

May faces heavy opposition in parliament to her Brexit deal and many expect her quest for approval to be defeated, setting up further tense talks with the EU when she goes to Brussels on Thursday for a summit of national leaders.

Alyn Smith, a Scottish nationalist member of the European Parliament and one of those Brexit opponents who raised the case seeking clarification of Article 50 of the EU treaty to the European Union’s supreme court in Luxembourg said:

“Today’s ruling sends a clear message to UK MPs ahead of tomorrow’s vote that there is a way out of this mess. A light at the end of the tunnel for the economy, for jobs and for the UK’s standing on the world stage. Now it’s up to the UK.

“If the UK chooses to change their minds on Brexit, then revoking Article 50 is an option and the European side should make every effort to welcome the UK back with open arms.”

May’s environment minister Michael Gove, who campaigned for Brexit, dismissed the ruling by repeating the government’s insistence that it would not reverse its decision to leave.

The ECJ said in its statement that Britain should suffer no penalties if it halts the Article 50 process which May triggered last year after a June 2016 referendum: “Such a revocation, decided in accordance with its own national constitutional requirements, would have the effect that the United Kingdom remains in the EU under terms that are unchanged.”

EU leaders have long insisted they would welcome Britain changing its mind, but many EU officials and legal experts had believed that the approval of either all or most of the other 27 members states would be needed to halt Brexit altogether.

Some senior EU officials have also said that Britain should be allowed to remain but could be asked to give up some of the special terms it has acquired over the past four decades, notably a hefty rebate on its payments to the bloc’s budget.

It is far from clear whether or how Britain could organise a new referendum, notably given the short time left until Brexit.

If May wins her vote on Tuesday, the withdrawal seems likely to proceed as agreed with Brussels last month. If she loses, her own position could be in jeopardy, there could be a move for a new election, or possibly to hold a new referendum.

Many warn, however, that it could stir unrest. Opinion polls suggest that any new majority for staying in the EU is narrow.

King of the jungle: Harry Redknapp wins I’m A Celebrity