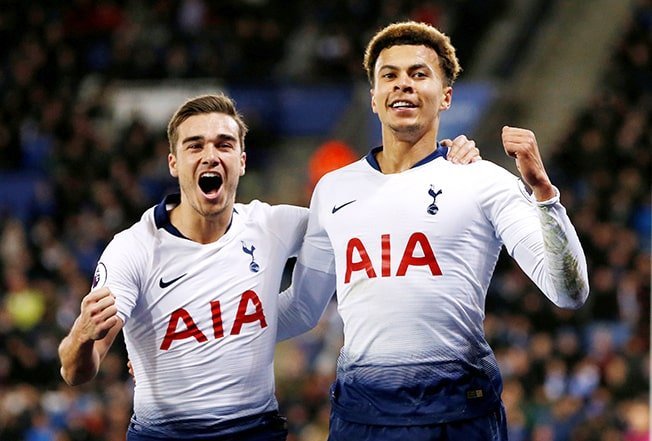 Tottenham midfielder Dele Alli believes victory at Barcelona would be among their best results yet.

Mauricio Pochettino’s Spurs go to the Nou Camp in the Champions League on Tuesday knowing victory would seal a spot in the knockout stages.

They are level on seven points with Inter Milan, who host PSV Eindhoven, in Group B.

Alli scored his 50th Tottenham goal in Saturday’s 2-0 win at Leicester and, after Spurs failed to win their opening three group games, the midfielder feels victory in Spain would be one of the squad’s greatest successes.

He said: “It would definitely be up there. They are one of the best teams in the world, they’ve got some great players and as a kid you dream about playing at the Nou Camp and we’re going to go there and give it our best shot.

“I’ve had a bit of a cold but it’s not too bad.
“A cold won’t keep me out. We’re ready. It’s going to be another difficult game but they’re the games you want to be a part of, playing one of the best teams in the world and some of the world’s greatest players.

“You want to be challenging yourself and we’re going there with the mentality that we can win and we have to believe.
“It’s going to be difficult but we have to go there and give it our best.”

Alli doubled Tottenham’s lead on Saturday after Son Heung-min’s classy first-half opener.
Victory lifted Spurs to third in the Premier League and boss Pochettino insisted they can win in Barcelona.

He said: “We have a chance. Yes, I believe. I think we believe, that’s the most important thing, and then what happens happens, we are going to enjoy the game.

“Of course (I thought we were still in it), then we won against PSV and Inter, two victories, and then the third is possible of course.
“It’s always an exciting place, they’re one of the best teams in Europe and I know it’s amazing, very exciting to play against them.

“But at the same time it’s going to be tough to play there, we’re going to play one of the best teams in Europe and the only way that we can be happy will be to win the game, and that will be tough.”

Pochettino has warned Barcelona will not give Spurs a free pass.
Pochettino said: “It will be a massive game, they have qualified for the next stage but in the Champions League no-one is going to give a present.

“We need to win and deserve to win. The mentality is going to be 200 per cent to try to win.
“We are going to arrive in the best condition.”

Barcelona’s place in the last 16 is already assured as Group B winners, having taken 13 points from their five games. Ernesto Valverde’s men have only dropped points in an away draw at Inter so have nothing riding on this group-stage closer. That could tempt Valverde into changes as he looks to rest his squad, something Pochettino will be keeping a close eye on.

Even if Barca do ring the changes, Spurs should not get too optimistic as the Spanish side are unbeaten in European home games in five years.

Valverde’s options are not exactly limited and whoever plays will be keen to keep that record going. Not since Bayern Munich sauntered to a 3-0 win in May 2013 have the Nou Camp faithful seen a Champions League home loss, and you have to go back even further to witness one in the group stage.

Klopp insists he was never worried about Salah