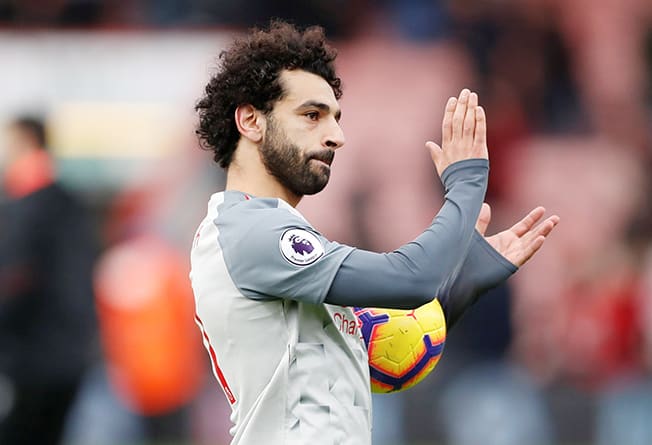 Liverpool must beat Napoli at Anfield to stand any chance of reaching the Champions League’s last 16. They hope Mo Salah, who hit a hat-trick on Saturday, can fire them to glory

Egypt striker Salah made it 10 Premier League goals for the season with his hat-trick in Saturday’s 4-0 win at Bournemouth that sent Liverpool top of the league.

“Your basis is a difficult one because always you have to touch on the moment; I’m interested in the moment but I never judge it because the moment is just a little part of all that we have together,” said Klopp.

“So I was not one second worried about Salah. I don’t know exactly what people wrote, I have no clue about that.
“But we have to develop always, and to confirm and to improve again on a 41-goal season.
“Everybody would struggle a little, because how can you improve on that?

“If you score in the first five games 10 goals everyone will say ‘yeah it’s going to happen again’.
“And then if you ended up with 39 people would say ‘yeah but it’s not 41’.

“And we all have to learn to deal with it, and him of course as well. That’s how it is.
“He’s never had a season like that before, and he wants to have the season again. But you have to make it step by step, so that’s what we do.”

Liverpool must beat Napoli at Anfield on Tuesday to stand any chance of reaching the Champions League’s last 16, with Klopp calling on his players to prove their true class.

“We were not good at Napoli so first of all we would like to show we are better than that,” said Klopp.
“So we also have to call again on Anfield, and they should help us because that’s a massive game, a really massive game.

“Last year we did nearly everything to get qualified for that tournament again, because we had the final in the background but we also knew we had to do the job in the league.

“So now we have the chance with a specific result still to go through when this Champions League campaign so far was not really ours.
“In the home games so far we weren’t quite so impressive. They know as well it will be tough, but they are strong and we need to be very strong.

“We have to be on our toes on Tuesday night. It’s a big one, our people know that and I know they are already warming up.

“I believe people get what they deserve. So if we are good enough we will get the result we need and go through. And if not we’ll congratulate Napoli and Paris, that’s how it is.”

Alli: win over Barca would be among Spurs’ best results