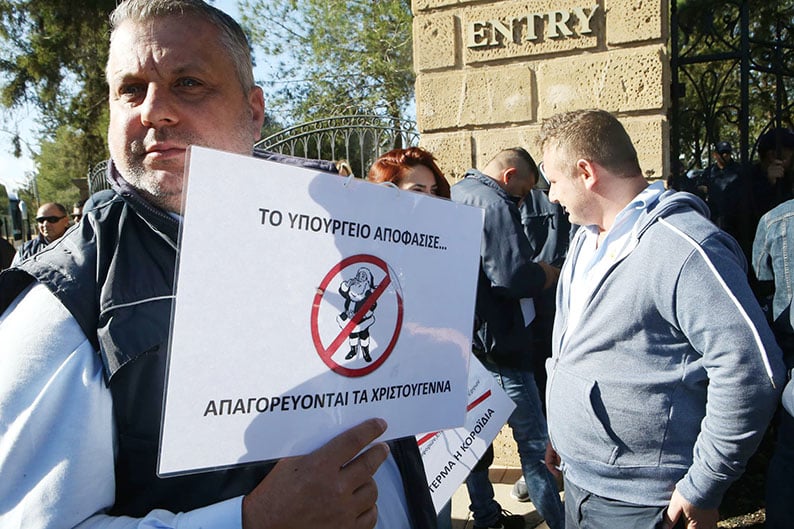 Drivers from the Paphos public bus company, Osypa, gathered on Tuesday morning outside the Presidential Place to protest over the fact that they had not received any assurances they would receive their December and 13th salaries.

The protest follows a dispute between Osypa and the transport ministry over the settlement of overpayments made to the bus company in previous years.

The drivers, who also plan on protesting outside parliament and the transport ministry, arrived outside the Presidential Palace at around 10.20 am holding signs reading: “The (transport) ministry has decided Christmas is banned,” referring to the insecurity of whether they would receive their December and 13th salaries.

They are to also deliver a petition to President, Nicos Anastasiades, asking him to intervene so that they are paid on time. Since 2016, the letter said, they have been paid their salaries with a 15-day delay, including 13th salaries and holiday pay.

The drivers, who had gone on strike last week for not receiving their November salaries – which they have now been paid – said on Monday they were still planning on protesting outside the presidential palace on Tuesday despite a last-ditch effort by the transport ministry which paid their company the subsidies for October and November.

A spokesman for the drivers, Christos Evangelou, told state television CyBC they were going ahead with the protest because they had not received any assurances for the December and 13th salaries. He said the company, Osypa, could not guarantee anything beyond November.

Drivers had warned that they would continue their indefinite strike unless they receive reassurances they would get also their December and 13th salaries.

The current deadlock between the state and the public transport provider is the result of the bus company insisting that the ministry draws up a new independent arbitration committee to assess their dispute on financial matters, while the state refuses to begin dialogue until strike measures cease, with striking employees refusing to yield until a solution is found between the two parties.

The intermittent strike measures have caused serious problems for public transport users who are mainly students, the elderly, low-income workers and tourists.

View Nicosia in a new light

Ronaldo wants Messi to resume their rivalry in Italy