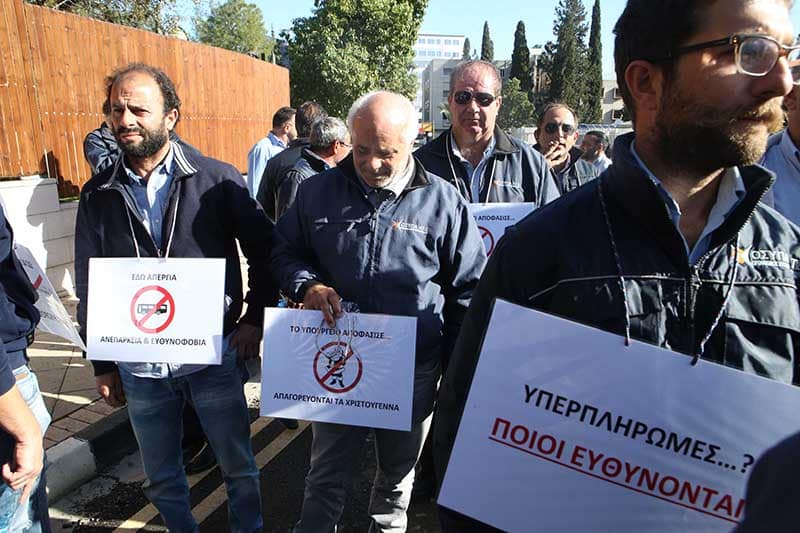 Paphos public bus (Osypa) drivers will go back to work on Wednesday, they decided at a meeting on Tuesday afternoon shortly after Transport Minister Vassiliki Anastasiadou urged them to do so and claim what they are owed from their employer, not the government.

After the meeting ended at 5pm, Osypa spokesman Christos Evangelou said that the workers decided to restart their work on Wednesday as a gesture of good-faith to the company and the transport ministry, who have pledged to find a solution by December 23.

Evangelou said the drivers and other workers would be paid their November salary after the government gave the company a sum of money and they would wait until December 23 to see what would happen with their December and 13th salaries.

However, they warned of new action if they are not paid by December 23.

The drivers, some of whom travelled to Nicosia on two rental buses on Tuesday, protested outside the Presidential Palace, parliament and the transport ministry in the morning after receiving a new government proposal.

The protest followed a dispute between Osypa and the ministry over the settlement of overpayments made to the bus company in previous years.

The drivers arrived outside the Presidential Palace at around 10.20am holding signs reading: “The (transport) ministry has cancelled Christmas,” referring to the insecurity of whether they would receive their December and 13th salaries.

They delivered a petition to President Nicos Anastasiades, asking him to intervene so that they are paid on time. Since 2016, the letter said, they have been paid their salaries with a 15-day delay, including 13th salaries and holiday pay. They also expressed concerns for the future of the more than 250 employees of Osypa.

The drivers then headed to parliament where they met House Speaker Demetris Syllouris who reassured them that if the company submits its invoices for December to the ministry the soonest possible then they would receive their salaries for the month. He also pledged parliament’s readiness to assist.

The group later went to the transport ministry, where a delegation of the drivers met Anastasiadou.

The minister said she felt understanding and compassion for the drivers.

Their demands, however, “ought to be addressed to the company who is their employer and which ought to pay them their salaries, and not to the ministry.”

Regardless of any financial differences between the ministry and Osypa, she said, the company ought to pay the salaries of its employees.

As a sign of goodwill, the ministry has paid the company its grant for November “so that the company cannot argue that it cannot pay salaries,” she said.

“We call on the employees to go back to work and of course, their employer ought to pay their salaries,” Anastasiadou said. She also called on Osypa to go to the ministry and discuss with its permanent secretary issues concerning their financial differences for a solution to be found.

This, she said, is the same procedure that took place concerning overpayments. The minister said that consultations with the other bus companies were “in a good way.”

On Monday drivers had warned they would continue their indefinite strike unless they receive reassurances they would get also their December and 13th salaries.

The current deadlock between the state and the public transport provider is the result of the bus company insisting the ministry draws up a new independent arbitration committee to assess their dispute on financial matters, while the state refuses to begin dialogue until strike measures cease, with striking employees refusing to yield until a solution is found between the two parties.

The intermittent strike measures have caused serious problems for public transport users who are mainly students, the elderly, low-income workers and tourists.

Cyprus projects up for architecture prize