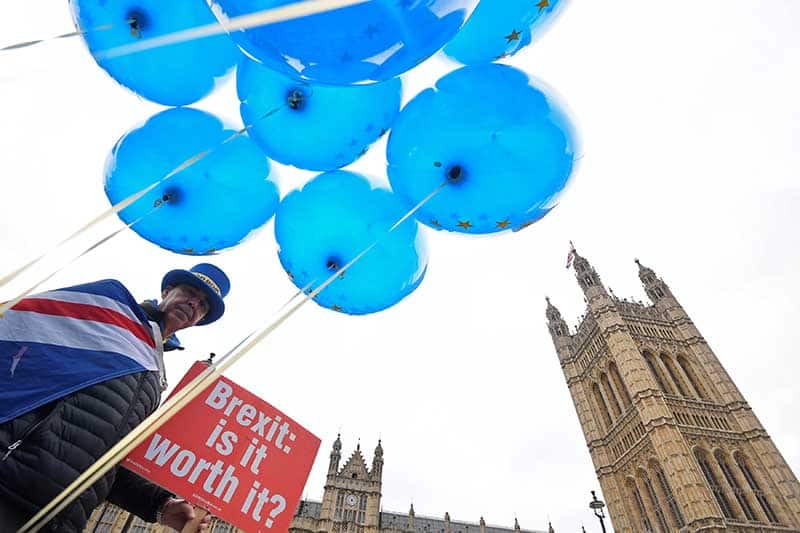 The 49-year-old’s signs protesting against Britain’s departure from the European Union are a regular backdrop to news footage shot outside parliament, as are his loud cries of “Stop Brexit”, aimed at lawmakers inside.

For the last 15 months, the Welshman has made it his mission to stand outside parliament each day its members are in session, making sure his message gets across even if that means intruding on live broadcasts.

“To me this massive social injustice … is already tearing our nation apart,” Bray, wearing a blue hat with a yellow band – the colours of the EU flag – as well as a large joint Union Jack and EU flag on his back, told Reuters.

“I want people in their towns, villages to see that people are standing up to this mess that we are in.”

Bray began his Stand of Defiance European Movement protest in September 2017, leaving his Port Talbot home for London. He says he stands outside parliament from 10 a.m. until 6 p.m.

While Brexit supporters are also regularly outside the building, Bray has become well-known for his tactics.

He attaches banners reading “We want a people’s vote” or “Stop this Brexit Mess” to long poles to ensure they can be waved in sight of the recording cameras inside raised broadcast tents. Sometimes that means jumping over fences, drawing the attention of security guards.

Political reporters and local workers recognise him and he says he has spoken with more than 70 members of parliament. Fellow anti-Brexit protesters introduce themselves – some have become friends – and passersby snap pictures of him.

“It was such a powerful feeling standing in front of parliament with a flag and people took pictures and I just thought: Why is there nobody here?” Bray said of how his protest began.

“When I get here, first of all I set up flags, banners on the lamp posts facing parliament … I’m all about getting the message out, once I take all of this off, nobody knows who I am.”

Bray has put his job as a self-employed numismatist on hold, and says he lives “as cheaply as possible”, with supporters offering him hot drinks, food and rent-free accommodation. He also receives “the odd private donation here and there”.

“We raise money from selling flags, badges and wristbands at fairs, at marches and here and that’s enough to keep us going,” he said.

On Monday, Bray was joined on site by dozens of bickering pro- and anti-EU protesters, as Prime Minister Theresa May postponed a parliamentary vote on her Brexit deal.

“I will be here for as long as it takes to stop Brexit, if need be reverse Brexit,” Bray said.