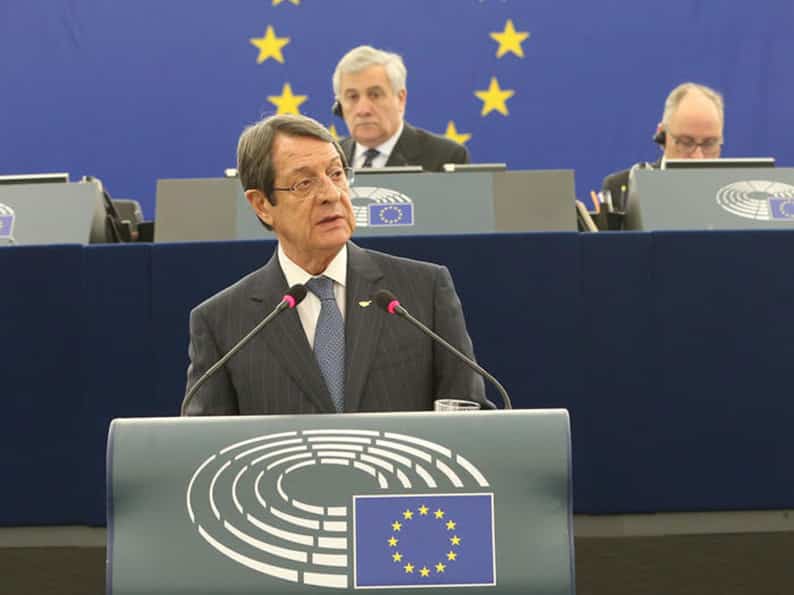 European defence, migration, Brexit and regional cooperation were raised by President Nicos Anastasiades during a speech he gave on Wednesday to the European Parliament plenary in Strasbourg.

He first condemned the terrorist attack in the French city on Tuesday, saying terrorism was one of the most serious threats to peace and security in the EU.

“We will not allow fear and terror prevail. Instead, we will remain united in strengthening our efforts to eradicate this heinous phenomenon,” he said.

In his address, Anastasiades said it was disturbing to watch developments and trends towards instability in Europe of late such as terrorism, the Brexit situation, closing borders, the revival of nationalist tendencies, and the surge of populism among member states.

“The above phenomena are something we collectively have to face, to protect the geographical, political and economic entity, and European integration for which we have worked hard,” he said, adding that Cyprus was a staunch supporter of a stronger, more democratic and more united Europe.

“We need to listen to citizens to understand the underlying causes of the dissatisfaction being expressed, through ensuring a large turnout in the European elections and to understand the reasons for the crisis of confidence,” he added.

“There is now an urgent need for clear answers and sincere self-criticism, reflection to understand what has failed and what we should do better so that European citizens can have confidence in the union and its institutions, so that they can again feel secure and confident that all challenges are being addressed.”

Anastasiades said Cyprus was and remained a staunch supporter of the growing defence and military cooperation between the member states. It ranks among the countries that expressed the first time the desire to join the Permanent Structured Cooperation (Pesco) he said.

“Although we recognise Pesco as a decisive step, our vision remains the military independence of Europe, the creation of the Euro-army, a power body to shield its borders to serve the defence interests of the union,” he said.

On migration he referred to the pressure Cyprus has been under lately with increasing arrivals and said one of the aggravating problems was the buffer zone dividing the island.

He went on to say that the most fundamental challenge in the long history of the EU was Brexit. “Respect for the British people’s decision was certainly the only choice,” he said, adding that Cyprus was satisfied with the overall result of the negotiations.

“We support a broad and multi-layered relationship between the UK and the EU, and will continue to work to this end. The new relationship must be   mutually beneficial, in full harmony with EU principles, structure and autonomy.”

He also expressed satisfaction with the protocol agreed for the British Bases in Cyprus, which ensures continuation of the existing situation vis-à-vis the Republic.

Anastasiades also mentioned the tripartite mechanisms set up with neighbouring countries including Greece, Egypt, Israel, Jordan, Lebanon and Palestine, based on international law and the values of mutual respect and solidarity.

“The establishment of tripartite cooperation is particularly beneficial for the EU, mainly in the energy sector, contributing to the desired energy security and diversification of energy sources and supply corridors to the union,” he said.

“It is also very important that the EU remains clearly in solidarity in the Republic of Cyprus as regards the exercise of sovereign rights for exploration and exploitation of natural resources within its EEZ, while constantly and consistently stresses the need to avoid any threats or destabilising activities incompatible with what international law and European law dictates,” he added, referring to Turkish threats.

Omonia Nicosia to offer up to €25,000 to whistleblowers