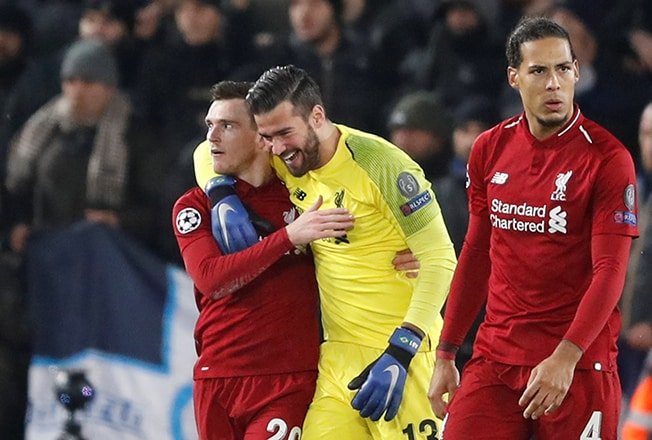 Mohamed Salah continued his prolific form to fire Liverpool into the last 16 of the Champions League on Tuesday but coach Jurgen Klopp was just as thankful for his “lifesaver” of a goalkeeper after the 1-0 win over Napoli.

The slender victory was enough for Liverpool to progress at the expense of Napoli, who started the day top of Group C but crashed out on goals scored after the clubs finished tied on nine points with the same head-to-head record.

Klopp, along with a nervous Anfield crowd, watched Liverpool hang on at the death, with relief palpable all around as Brazilian Alisson rushed from his line to deny Arkadiusz Milik in almost the last act of the match.

“The save Ali made – I have no words for that,” Klopp said. “That was a lifesaver tonight.

“It wasn’t just one save – he had a lot of things to do and did it so coolly and calmly. Still he did it, incredible, unbelievable, never saw anything like it.”

“The goal Mo scored, what a goal, unbelievable,” Klopp said.

After all that Salah has achieved in such a short space of time at Liverpool, even someone as articulate as Klopp might be forgiven for running out of words with which to praise the Egyptian.

His 44 goals in all competitions in his first campaign at Anfield exceeded all expectations so seven goals in Liverpool’s first 15 league matches this season, plus two in five Champions League starts, looked meagre by comparison.

In the space of a week, though, Salah has confirmed his importance to Klopp’s team with two telling contributions.

A hat-trick at Bournemouth helped steer Liverpool to the top of the Premier League before his superb solo strike on Tuesday edged Liverpool into the last 16 of Europe’s elite competition.

With Salah now back in something like last season’s groove, and a defence that has conceded just six Premier League goals all season, Liverpool look like they are hitting top gear just at the right time.

Having qualified for the knockout stage of the Champions League in such tense circumstances, however, it was too early for Klopp to start thinking about the teams that stand between the five-times European champions and another title.

Who might be Britain’s next prime minister if May goes?

Christmas packages given out to Nicosia’s needy