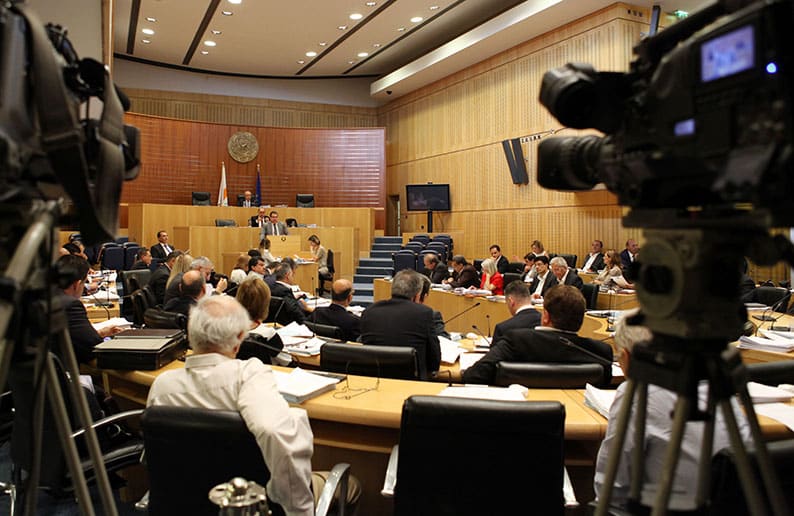 The House of Representatives in a plenary session on Wednesday night started its three-day discussion on the state budget for 2019.

A total of 48 government amendments have been submitted for the state budget and various others by parliamentary political parties.

The debate started with the presentation of the report prepared by the committee on financial and budgetary affairs. This was followed by speeches from leaders or representatives of the parties. Discussion is to be completed on Friday followed by the vote, scheduled to start at around 6pm.

It is expected that the budget will be approved by Disy, Diko and the Solidarity Movement.

Main opposition Akel but also Edek, the Greens, the Citizens’ Alliance, Elam, and independent MP, Anna Theologou are expected to reject it.

Diko party chairman Nicolas Papadopoulos told MPs that the party would support the budget because economic stability was a priority.

The party, he said, had pushed through important amendments to the budget.

These included a raise for low income pensioners by €40 to €50 per month, reduction of the fuel consumption tax, heating oil subsidy for mountain areas, the Estia loan repayment scheme, a second Estia scheme for the reward of consistent borrowers and further support for those who lost money in the haircut through the solidarity fund.

“Diko insists that 2019 it should be the year of rehabilitation, even partial rehabilitation, as far as possible and within our financial capabilities,” he said, adding that his party recognises that important socio-economic problems remain.

Disy leader, Averof Neophytou, urged MPs to support the budget, which he said, was one of growth with an increase in social spending and which contributes to the development of the Cypriot economy.

He said that the budget would allow for the implementation of major projects and programmes such as investments in e-government, the promotion of infrastructure projects and of major reforms.

The vision of the government, he said, was “a state that serves, and doesn’t inconvenience members of the public”.

The opposition parties, save Diko, were predictably scathing of the budget.

Akel leader, Andros Kyprianou, said that the “spring” President Nicos Anastasiades had promised in 2013 when he was first elected, has brought about homeless people five years later and steep rent increases, up to 50 per cent. A housing scheme remains on paper, he said, the budget for refugee housing has not been fully used this year, while funds concerning rural areas are being constantly slashed.

The 2019 budget, he said, continues to support a social model characterised by an unfair distribution of wealth and labour deregulation, a reduction in the unemployment rate leading to worse working conditions, wage cuts, particularly in the private sector and the conversion of permanent jobs into part-time one and temporary work.

He also said that Anastasiades and Disy insist on supporting a “bubble-generating economic model”. What interests them, he said, is to sell public property and semi-governmental organisations.

Leader and MP of the Greens, Giorgos Perdikis – the first party leader to speak ­– said that the budget “is returned to the sender” as it does not address the country’s needs.

Perdikis said that there are no provisions in the budget to satisfactorily cover the deficit of the social security fund.

“There are not enough provisions to indicate that some kind of dynamics will emerge that would radically change the existing economic and developmental model that has brought us to this point,” he said.

It is obvious, he said, that the government is seeking to recreate an unbalanced economy based on the services of the tertiary sector.

Elam leader, Christos Christou, said that health expenditure remains at the same levels, even though 2019 sees the introduction of the national health scheme, and that expenditure in defence has been decreased by €10m.

“Revenue from the extraordinary taxation on defence continues to cover other needs rather than armament programmes,” he said. Elam will not back the state budget for 2019, he said, except expenditure for defence and public health.

Citizens’ Alliance leader, Giorgos Lillikas, said that he too would vote against the budget as a whole except for the budgets of the ministries of foreign affairs, defence and health.

“The biggest social challenge we are experiencing and in which budgets do not provide a comprehensive response is the disruption of the social fabric and social cohesion,” Lillikas said.

The Solidarity Movement’s MP, Michalis Giorgallas, said that “although growth rates were impressive” in the medium term the Cypriot economy will not be sustainable unless courageous reforms are promoted.

Giorgallas warned of a new bubble, caused by the rapid increase in real estate prices due to the gold passport scheme.

The state budget for 2019, according to Edek leader, Marinos Sizopoulos, is for yet another year, “basically for management rather than growth” and lacking qualitative measures that would provide macroeconomic stability.

Despite improvement of the economy, he said, “any relief, in essence has vanished by the increase in the price of fuels, rents, sewerage taxes, the real estate tax -due to the revaluation of property values at 2013 prices- paid to the local authorities.”

Suspect in double murder says he was coerced into confessing

Adams to tackle mental health as next RFL president