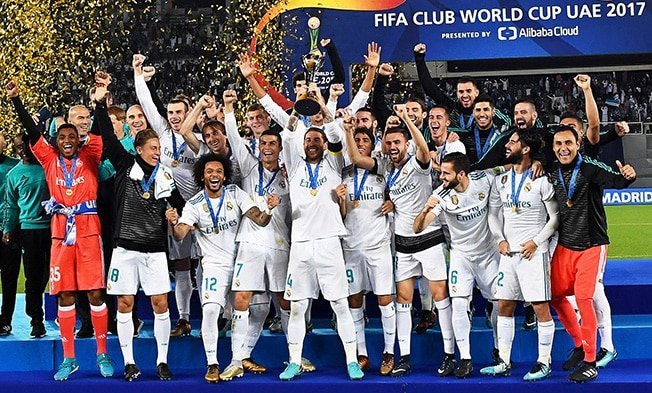 Unloved even by the federation which organises it, Fifa’s old-style Club World Cup got underway on Wednesday and it is hard to imagine any other outcome than Real Madrid winning for the third time in a row.

Fifa president Gianni Infantino has ambitious plans to replace the competition with a 24-team event held every four years, but until those come to fruition, the contest will stagger on with its unwieldy format for at least one more year.

The seven-team competition features the champion club sides from each of the six continents, plus the domestic champions of host nation United Arab Emirates.

Participants range from the semi-professionals of Team Wellington, winners of the Oceania Champions League, to the millionaires of European champions Real Madrid where even the reserves are full internationals.

In principle, the Club World Cup is a laudable and logical idea but it has been overtaken by the economics of modern football where nearly all the top players gravitate to Europe.

Consequently, the best South American, African and Asian talents play against, rather than for teams from their own continent. European sides have won 10 out of 13 times since the tournament started in its current format in 2005.

In contrast, the old Intercontinental Cup, played either as a one-off or a two-leg tie between the European and South American champions, produced 22 wins for South America and 21 wins for Europe between 1960 and 2004.

Infantino has said that the competition needs to be “more interesting” and “more attractive” although his plans have run into opposition from European governing body Uefa.

A task force is currently examining possible formats and dates for Infantino’s proposed competition.
Even so, the current setup still attracts interest from outside Europe where teams and their fans dream of the chance to measure themselves against Europe’s best.

The competition kicked-off on Wednesday with a preliminary round match between Al Ain and Team Wellington, who have ended Auckland City’s run of seven consecutive Oceania titles.

The Abu Dhabi side won the game on penalties after a 3-3 draw after extra time.
They will now face a second round tie on Saturday against Tunisia’s Esperance, who will be bidding to become the third African team to reach the final.

In the other second round match, Asian champions Kashima Antlers, who took Real Madrid to extra time in the 2016 final, meet Concacaf champions Guadalajara, who hold steady to a tradition of only fielding Mexican players.

South American champions River Plate enter the fray in the first semi-final against either Esperance or Al Ain on December 18 while Real Madrid meet Guadalajara or Kashima Antlers in the second semi-final the following day.

The final is at the Zayed Sports City Stadium in Abu Dhabi on December 22.

River Plate only qualified on Sunday by beating arch-rivals Boca Juniors 3-1 in a tumultuous Copa Libertadores final which was postponed for two weeks and moved from Buenos Aires to Madrid.

Boca players were injured when their team bus was attacked as it approached River’s stadium before the second leg on November 21, forcing the game to be called off. River said the attack happened outside the stadium perimeter where they had no control over events.

River’s last appearance at the tournament was in 2015 where they were outclassed 3-0 by Barcelona in the final but coach Marcelo Gallardo said they were better prepared this time.

“If we look at the quality of the squads on paper, we can’t compete with such powerful teams,” he said.

“But this side has shown that it can play these types of matches against anyone and we will certainly be competitive.”
“Three years ago, we faced one of the best teams in the world and didn’t have a chance. Now, it’s a different moment. We will see.”

Halloumi is safe but trademark loss a blunder, says minister