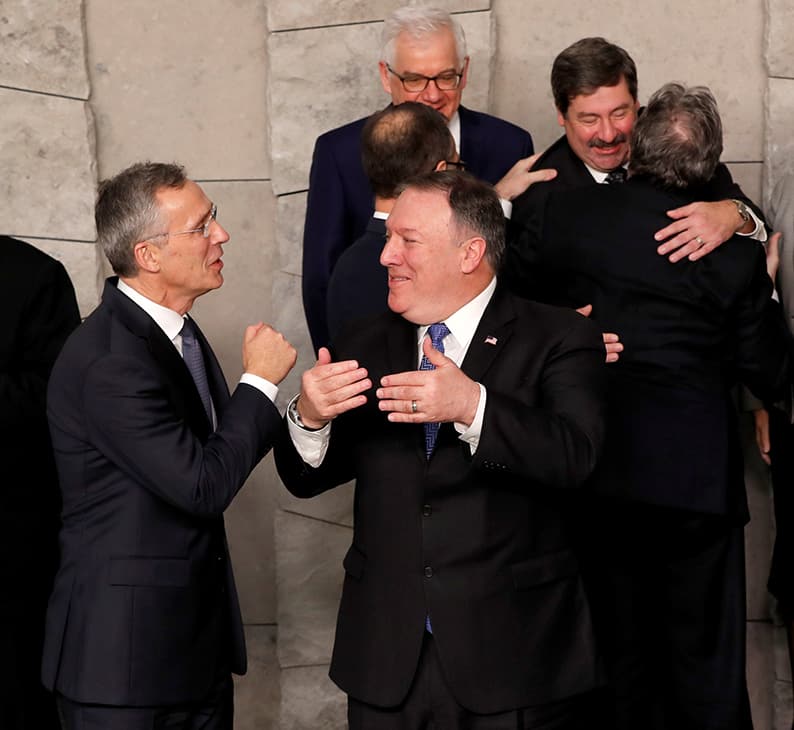 NATO's Secretary General Jens Stoltenberg and US Secretary of State Mike Pompeo gesture as they speak before posing for a family photo during the NATO foreign ministers' meeting at the Alliance's headquarters in Brussels, Belgium, December 4, 2018

US Secretary of State Mike Pompeo defended the Trump administration’s handling of the killing of Saudi journalist Jamal Khashoggi on Wednesday, stressing Saudi Arabia’s importance as a US ally against Iran.

Pompeo repeated his assertion that there was no direct evidence linking Crown Prince Mohammed bin Salman to the Oct. 2 murder of Khashoggi in the Saudi consulate in Istanbul, Turkey, despite a CIA assessment it was likely he ordered the killing.

CIA Director Gina Haspel was due to brief leaders of the House of Representatives behind closed doors on Wednesday about the killing. She has already briefed some US senators.

Asked during a Fox News interview about the CIA’s findings, made with medium to high confidence, Pompeo said, without providing details: “Some of the reporting that you’ve seen on that has been inaccurate.”

“They’re still working on this. This is still a developing set of facts with respect to the murder of Jamal Khashoggi,” he said. “The direct evidence – this is what I’ve said before – isn’t yet available.”

The killing of Khashoggi sent shockwaves around the world and has drawn outrage from lawmakers in the US Congress, including President Donald Trump’s fellow Republicans. Some of them have urged harsher action against Saudi Arabia.

The United States imposed economic sanctions on 17 Saudi officials last month for their role in the killing, stopping short of action that might affect lucrative US arms deals with Saudi Arabia that Trump has vowed to preserve.

Pompeo pointed to the sanctions and said the United States would continue to hold accountable those proven to have been involved in the killing of Khashoggi, a US resident and Washington Post columnist.

Riyadh initially denied any knowledge of Khashoggi’s disappearance after entering the consulate, then offered contradictory explanations, including that he was killed in a rogue operation.

Trump condemned the murder but has stood by the Saudi crown prince, despite the CIA assessment.

“He’s the leader of Saudi Arabia. They’ve been a very good ally,” Trump told Reuters on Tuesday in an Oval Office interview.

Pompeo was scheduled to attend a United Nations meeting to discuss Iran later on Wednesday.

“No one underestimates how horrible this murder was. But remember, Iran is running rampant throughout the Middle East,” he told Fox. “The death of any one individual is awful. The death of hundreds of thousands of people in Europe or the Middle East or the United States matters an awful lot.”

Nikki Haley, the outgoing US ambassador to the United Nations, told NBC News earlier that the administration needed to figure out a path forward with the Saudis.

“We need to have a serious, hard talk with the Saudis to let them know we won’t condone this, we won’t give you a pass and don’t do this again,” she said. “And then I think that the administration has to talk about where we go from here.”