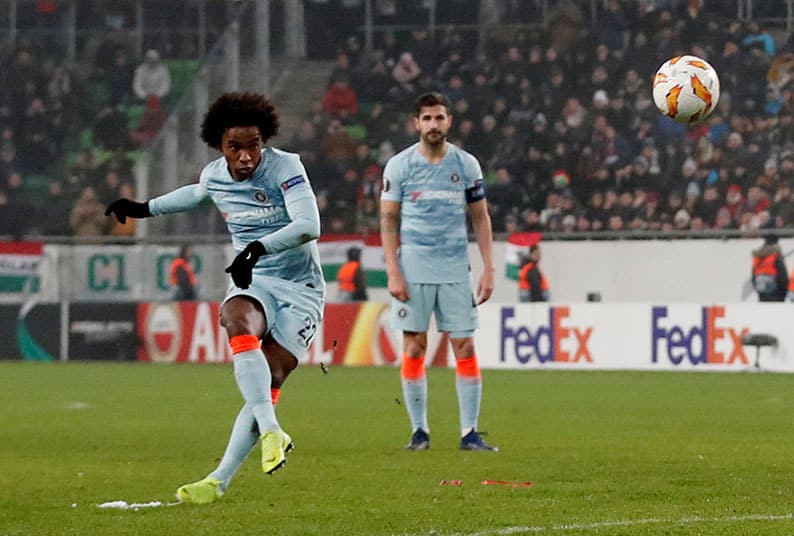 Chelsea's Willian scores their first goal from a free kick

Substitute Olivier Giroud saved Chelsea from an embarrassing Europa League loss at Vidi. Willian’s free-kick after 30 minutes was cancelled out immediately by an Ethan Ampadu own goal and Loic Nego struck a sumptuous volley after 56 minutes to give Vidi the lead.

But Giroud’s fine free-kick 15 minutes from time earned a 2-2 draw in a match of little consequence for the Blues, who had already qualified for the last 32 as Group L winners. Vidi finished third, as BATE Borisov joined Chelsea in the knockout stages.

Chelsea, who play at Brighton in the Premier League on Sunday, made 10 changes, with Willian the only player to retain his starting place following last Saturday’s 2-0 win over Manchester City.

The 18-year-olds Callum Hudson-Odoi and Ampadu were among the starters.

Head coach Maurizio Sarri has berated his players for lacking motivation in recent weeks, particularly in losses to Tottenham and Wolves, with the City match proving the exception.

The Italian had admitted on the eve of the match that it might be difficult to rouse his players for the contest, given nothing was riding on the outcome.

It took 30 minutes for the first real moment of quality to come at the Groupama Arena, when Willian injected some pace and was brought down by Szabolcs Huszti 25 yards out. The Brazil playmaker curled in the resulting free-kick.

Vidi’s reply was immediate and also came from a set-piece. They forced a corner, taken by Huszti, and Marko Scepovic’s header deflected in off the unfortunate Ampadu.

Hudson-Odoi showed glimpses of his potential. He did well to cross to Alvaro Morata at the near post, but Adam Kovacsik saved from the striker.

Nego next forced Willy Caballero into a strong save.

Chelsea did not heed the warning as the Vidi forward beat the Blues goalkeeper 11 minutes into the second half with a superbly-struck volley.

Georgi Milanov’s lofted pass found Nego in the right side of Chelsea’s area and he fired into the near top corner of Caballero’s net.

It was the first time Chelsea had fallen behind in the Europa League this season.

Hudson-Odoi swiftly had an opportunity, but his shot was too close to Kovacsik.

Emerson Palmieri then crossed for Giroud, but the Frenchman – who had replaced Morata at half-time – could only divert the ball wide at the near post.

Giroud volleyed over from a Cesc Fabregas free-kick soon afterwards.

Pedro next passed the ball just wide after being found by Hudson-Odoi. Giroud was alongside him and frustrated not to have received a pass.

Chelsea equalised after a Paulo Vinicius foul on Fabregas, 20 yards out.

With Willian already substituted, it was Giroud who stepped up.

His curling strike beat a defender on the line to go in off the underside of the bar.

It was the France international’s fourth goal in three Europa League games and preserved Chelsea’s unbeaten record in the competition, which resumes in February.