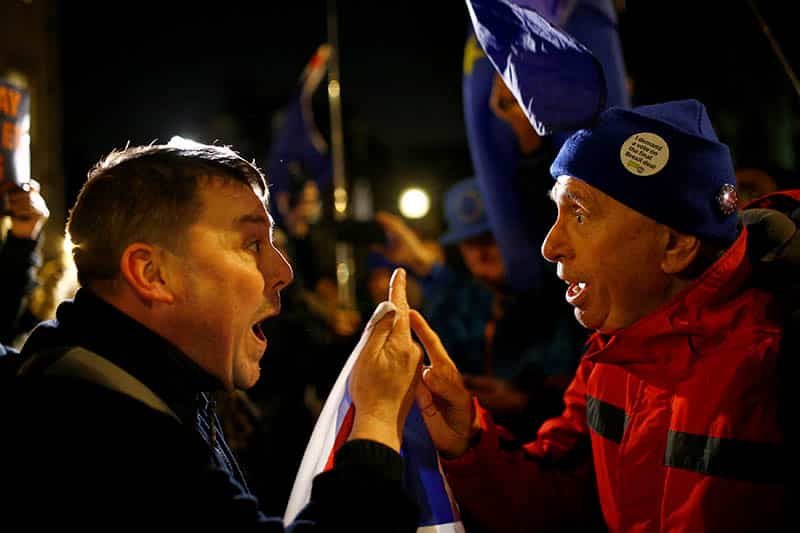 Pro-Brexit and anti-Brexit demonstrators shout at each other opposite the Houses of Parliament, in Westminster

A weakened Theresa May was set to ask European leaders for help on Thursday after a mutiny by more than a third of her lawmakers failed to unseat her but left parliament heading for deadlock over Brexit.

May won the backing of 200 Conservative members of parliament in the high-stakes secret vote while 117 dissented, far from the robust affirmation she needs as she heads to Brussels to ask for an improvement to the Brexit divorce deal.

But the EU was not likely to offer much immediately, with a draft statement the other national leaders in the bloc were preparing for May only speaking of their readiness “to examine whether any further assurance can be provided”.

Speaking in Downing Street after the vote, May said she would listen to those who had voted against her and seek legal assurances on the most controversial part of her deal – an insurance policy to prevent a hard border between EU member Ireland and the British province of Northern Ireland.

Many in her party fear that these “backstop” measures could last indefinitely.

“A significant number of colleagues did cast a vote against me and I’ve listened to what they said,” May said. “We now have to get on with the job of delivering Brexit for the British people.”

The EU’s draft statement, seen by Reuters, reiterated that the bloc prefers a new EU-UK deal to ever triggering the backstop and that it would try to swiftly conclude such an accord even if the emergency border fix kicks in.

EU states were not in agreement on the text on Thursday morning and diplomats in Brussels expected it to change. They suggested the bloc may be readying more solid assurances for May in January with Brexit day now due on March 29.

On Monday, May had cancelled a parliamentary vote on her deal, struck after two years of negotiations and designed to maintain close future ties with the bloc, after admitting it would be heavily defeated in the House of Commons.

With Britain due to leave the EU, parliament’s opposition has suddenly opened up possibilities including a potentially disorderly exit with no deal or even another referendum on membership.

May’s spokesman has said the prime minister will use the EU summit to explain the situation in parliament. “It is obviously an opportunity for the PM to address the 27 (other EU leaders) about the message that the House of Commons has sent about wanting more assurances about the backstop,” he said.

But EU leaders have been united in saying they have no intention of changing the agreement.

That approach is unlikely to quell the rising anger in London, where infighting amongst Conservative party members over Brexit has dominated the airwaves. National newspapers said “lame duck” May had been given a “Stay of execution”.

The Northern Irish party that props up her government – and strongly opposes her withdrawal deal – said the fundamental arithmetic in parliament was unchanged despite the confidence vote victory, and the backstop must go.

Eurosceptics who see the proposed deal as a betrayal of the 2016 referendum went further, saying May must now quit herself to give someone else the chance of getting a deal through parliament.

“The prime minister must realise that, under all constitutional norms, she ought to go and see the queen urgently and resign,” Jacob Rees-Mogg, leader of a hard Brexit faction, said minutes after the confidence vote result was announced.

That prompted a backlash from loyal lawmakers, who said the party needed to get behind May to deliver the result of the referendum.

“They never, ever stop,” Alistair Burt, a junior Foreign Office minister said of Rees-Mogg’s group. “After the apocalypse, all that will be left will be ants and Tory (Conservative) MPs complaining about Europe and their leader.”