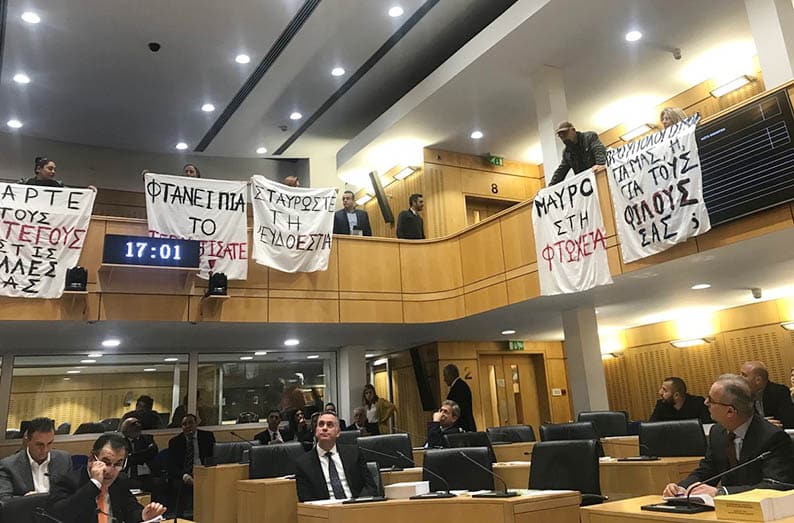 Protesters on Friday hung banners from the gallery of parliament during discussion of the budget. The handful of protesters haug banners that read “Take the homeless to your homes” and “Is the budget for us, or your friends?” Plain clothes police officers escorted the protesters outside the building where they then hung their banners (Christos Theodorides)

THE state budget for 2019 was approved on Friday night with 30 votes in favour and 24 against, with MPs across all parties bar Disy voting to temporarily freeze funds amounting to €33mn for the implementation of the Estia debt relief scheme.

The money is to be released after the written consent of the House finance committee once they are satisfied the money will really go to vulnerable borrowers.

The state budget for 2019 provides for a surplus of 3 per cent of GDP, with general government revenues of €8.55bn and expenditure of €7.91bn. Primary spending by the central government will amount to €6.27bn. Fifty-one amendments tabled were incorporated into the budget, increasing expenditure by €16 million.

As expected, participating MPs from Disy, Diko and Solidairty Movement voted in favour, with main opposition Akel but also Edek, the Greens, the Citizens’ Alliance, Elam, and independent MP, Anna Theologou voting against, ending the three-day debate in parliament.

Exiting parliament after the session, Finance Minister Harris Georgiades expressed his satisfaction with the budget, which he described as “balanced, for the sixth year in a row,” and one that “constitutes a tool in the broader effort to promote our economy’s growth.”

Akel was the only party voting against the budget in its entirety, with MP Giorgos Loukaides saying that the party’s negative vote was a political statement seeking to stress disapproval of the government’s fiscal policy, adding that there’s no reason to vote in favour of any funds, even those the party may agree with.

The vote began shortly after 6pm and lasted over two hours.

Some of the items include cutting operating costs by five per cent across all ministries and government departments. A five per cent cut was also approved for the budget allocated for consulting services, except those involving the Committee for Missing Persons (CMP), the bicommunal technical committees, the department of foreign policy, matters related to the Cyprus problem, and the framework of implementing and promoting Gesy.

Certain items in the budget were frozen, meaning they are withheld by the legislature, forcing the executive to go to the House finance committee and justify them before the cash can be released.

The funds amounting to €33mn earmarked for the controversial Estia debt relief scheme, were frozen after approval of an amendment tabled by Akel, Diko, Edek, Citizens’ Alliance, Solidarity, and the Greens, by 34 votes win favour and 18 against.

Earlier in the week, Akel MP Stefanos Stefanou said that the party’s move to freeze Estia funds was to ensure scrutiny of the process, which in their opinion does not cover truly vulnerable households.

Also frozen were funds amounting to €3.16m earmarked from the energy ministry’s budget to go towards education on hydrocarbons. With 34 votes in favour and 17 against, a sum €3.5mn allocated from the finance ministry’s budget for the purchase of new limousines for state officials was also frozen.

A sum of €348,000 earmarked for ‘expert consultants’ for the president was also frozen.

Funds amounting to €150,000 earmarked for social insurance services were also frozen following the approval of the amendment tabled by Akel and the Greens, to ensure the department will be reinforced with staff with disabilities as promised by the government.

House president Demetris Syllouris had stated prior to the session that he would not be voting in favour of any proposition for the freezing of funds, which he considers an incorrect procedure.