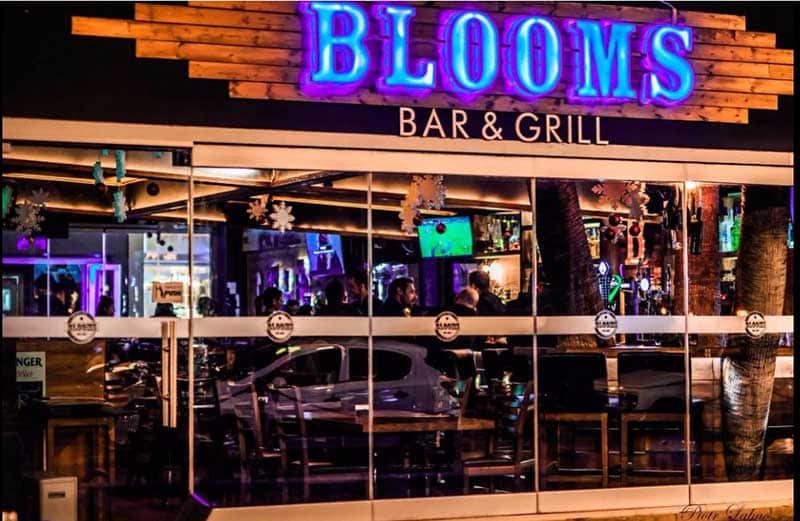 It was a glorious, sunny day and my friends had just finished taking part in the half marathon. After such a gruelling activity, I went to meet them and help them replenish their spent energy by going for a bite to eat. Phinikoudes was absolutely heaving with people but luckily we found somewhere and settled at Blooms Bar and Grill.

You’d be forgiven for thinking that Blooms was a sports bar as there are many screens for when there is a sporting event on. However, it’s more of a casual bar/restaurant that just caters for sports fans.

Entering, the colours of the decking and tables are a calm, earthy brown and there are many humorous quotes and captions on the walls relating to beer and whiskey!

With the option of sitting in a booth, regular table or high table, we decided that it wouldn’t be a good idea to squash up post running and opted for the high table.

A friendly waiter came over, offered us menus and told us to ask if there was anything he could help with.

Blooms has a variety of interesting beers on offer. Great for all the beer lovers out there! While most opted for an Erdinger, I had an Indian pale ale.

In terms of food I was between the pulled pork burger and the cheeseburger. My friend ordered the pulled pork burger and despite worrying about having food envy later, I stuck to the cheeseburger. Another ordered a Mexican burger with salsa and guacamole. However, we came across a little difficulty as one of the party is vegan and Blooms had literally nothing on the menu to cater for that. Even the salads came with a meat of some sort or a sauce. When we asked what they could offer, the waiter was stumped and had no suggestions. We asked if they could make a grilled vegetable sandwich served with chips. After asking inside he confirmed that it was ok to do so.

The food arrived and we were ready to tuck in! My friend who ordered the Mexican burger, did so mainly for the guacamole. However, there was no guacamole and when we asked the waiter he said that it doesn’t include guacamole and we had to show him on the menu that it should. To top it off, the salsa had made the burger cold!

The pulled pork burger looked tasty but completely smothered in sauce and was extremely messy! My friend had to put it down to wipe his hands and mouth after each bite! My cheeseburger was just ok. I can’t say that it wasn’t good but it wasn’t great either.

It wasn’t all doom and gloom as the chicken schnitzel not only looked impressive, we were assured that it was good. It was a huge dish! Grilled vegetables sandwiched between TWO chicken schnitzels. Despite the schnitzels being a little burnt round the edges, my friend enjoyed her meal.

Even though Blooms wasn’t actually very busy, it still took a very long time when we asked for the bill. When it came, we sorted the money out and waited…and waited for it to be collected. It was a little frustrating so my friend got up to go pay it, only to be told to sit down and they could come to us.

Although reasonably priced, I can’t say I will be rushing back to Blooms for food but may give it another go to have a few beers and watch a match.