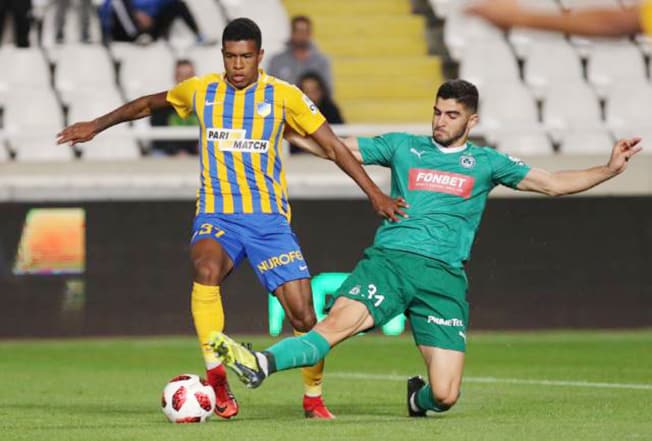 It’s been more than five years and 21 games since Omonia last beat bitter local rivals Apoel and 13 games since they last avoided defeat, giving the Omonia players an added incentive to battle for the win

The big Nicosia derby between Omonia and Apoel stands out this weekend while on Monday there will be another huge game between Cyprus’ two teams that were knocked out of the Europa League, Apollon and AEK.

Leaders AEL face a tricky match against Doxa Katokopias while Ermis and Alki, the two teams in the bottom two places, clash in Larnaca.

In the other games Anorthosis take on Pafos FC while Nea Salamina are at home to Enosis Neon Paralimni.

It’s been more than five years and 21 games since Omonia last defeated their bitter local rivals and 13 games since they last avoided defeat, giving the Omonia players an added incentive to battle for the win.

Omonia’s Spanish midfielder Jordi Gomez pointed out that his team have not defeated any of the so called ‘big six’ teams so far this season but believes that they have what it takes to finally put an end to this poor run and more so against their arch-rivals.

His coach Yiannis Anastasiou was equally confident ahead of the big clash but pointed out that his players should remain focused for the whole 90 minutes and try to take advantage of any mistakes by opponents.

“If we remain patient and stick to our game plan then I believe that we can secure the win that will give our fans immense joy,” Anastasiou said.

His counterpart at Apoel, Paolo Tramezzani, has seen his team score nine goals in their last couple of games against strong opposition (Apollon and Nea Salamina), with the champions seeming to be getting stronger every week.

Tramezzani is expected to field the same eleven, as well as deploy the same 3-5-2 system he used in the last couple of games hoping for a third consecutive win, something that his team has been unable to do so far.

A lot will depend on whether Omonia can rein in Apoel’s two young silky forwards, Natel and Al Tamari, who given some room, can destroy any defence.

Leaders AEL are up against Doxa Katokopias at the Makarion stadium with the visitors having the edge over their opponents despite being without three key players, Torres, Wheeler and Fidelis, for the clash.

Doxa have lost their way dropping from fourth to eighth in recent weeks. They led in their last four games but were pegged back and managed to pick up just two points from 16 giving their coach Loukas Hadjiloukas something to think about.

Anorthosis seem to have turned the corner under new Dutch coach Jurgen Streppel and will be favourites against inconsistent yet dangerous Pafos FC.

Streppel’s side have dropped just two points from their last five games and have edged up the table to fifth place, level on points with AEK.

Pafos FC though seem to save their best against the ‘big’ teams, as they did against AEK last week, when they defeated them by the only goal of the game.

The two teams rooted at the bottom of the table Ermis Aradippou and Alki on seven points are involved in a relegation six-pointer with neither side content with anything other than a win.

In the final weekend game Nea Salamina will be looking to return to winning ways after two defeats and they should prove too strong for Enosis Neon Paralimni.

On Monday evening Apollon are at home to AEK in a crucial game for both sides.

Apollon are enjoying a purple patch and on current form they are favourites to pick up the three points against a team that has lost three of their last games, two in the league and one against Bayer Leverkusen in the Europa League.

Boy dies in north after bomb explodes in his hands