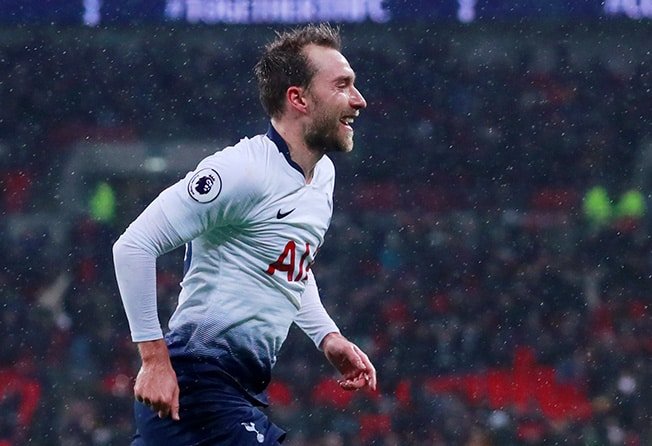 Spurs looked like enduring a disappointing comedown from their midweek high in Barcelona as they struggled to break the Clarets down at Wembley.

But Eriksen, introduced from the bench, won it in the first minute of time added on when he coolly clipped home.

It was no more than Spurs deserved, as they missed several chances to have the game wrapped up before then, but they got the job done and cemented their place in the top three.

For Burnley it was another away defeat and they continue to hover above the bottom three.

With top-four rivals Liverpool, Chelsea and Arsenal not in action, Spurs had the chance to lay a marker down and they assumed early control.

They could have made things a lot easier for themselves had Lucas Moura taken a good 17th-minute chance – when Erik Lamela’s ranging long ball set him free – but the Brazilian’s first-time effort drifted just wide of the post.

Lamela had Tottenham’s best chance of the first half soon after, but he could not make it count.

Moussa Sissoko’s quick free-kick launched a fast break, the ball ended up back with Sissoko and he unselfishly found Lamela, but his first touch was heavy and it allowed Clarets goalkeeper Joe Hart to scramble across and make a block with his body.

Lamela shot over from the edge of the area and Harry Kane saw an effort blocked but it was an opening 45 minutes that will not live long in the memory.

And Spurs were given a wake-up call early in the second half as Burnley threatened from a set-piece as Ashley Barnes’ goalbound volley from Aaron Lennon’s knockdown was blocked by Toby Alderweireld.

After that it very quickly became attack versus defence as Spurs tried to break down a resolute Burnley back line, who tried to kill the game.

The fact that Sean Dyche’s men had two players booked for time wasting by the 68th minute says everything about their approach at Wembley.

But for all their possession and territorial advantage, Tottenham struggled to get in behind the Clarets until their golden chance came in the 75th minute.

Danny Rose’s cross fell kindly to Lamela eight yards out, but instead of putting his foot through it, he nonchalantly tried to stroke home, allowing Hart to get down well to make a save.

It looked like being an afternoon to forget, especially when Heung-Min Son dragged an effort wide at the far post, but Eriksen had the final say.

Dele Alli headed to Kane and the England captain teed up his Danish team-mate to clip home.

Finally, Gerard Deulofeu starred as Watford withstood a late rally from Cardiff to end a six-match winless run with a 3-2 victory at Vicarage Road.