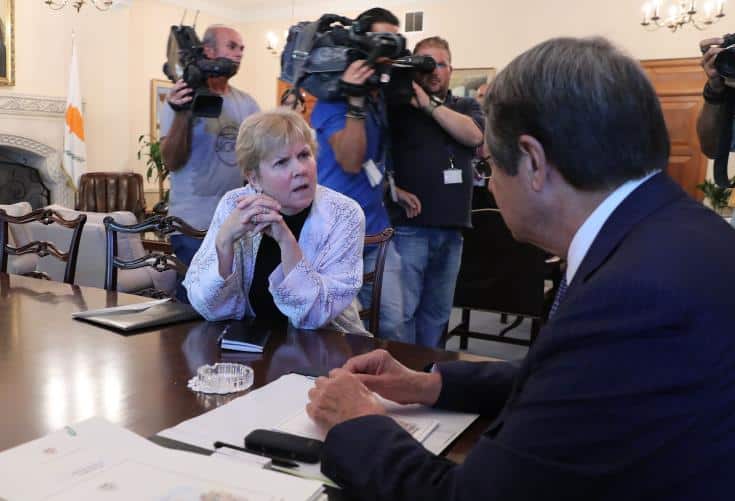 The Greek Cypriot side is looking forward to the meeting on Sunday morning of President, Nicos Anastasiades with the UN Secretary-General’s special envoy for Cyprus Jane Holl Lute since the aim is to relaunch the settlement negotiations as soon as possible, Government Spokesman Prodromos Prodromou said on Saturday.

The UN official, who arrived on the island on Friday, will meet both leaders with a view to clinching an agreement on the terms of reference that will pave the way for the resumption of Cyprus talks.

The envoy is expected to discuss both UN Secretary General Antonio Guterres’ position that terms for restarting talks need to be agreed as soon as possible and to put forward her own ideas based on previous visits to the island.

Prodromou said that Anastasiades is ready “for a constructive cooperation with the UNSG’s envoy, having a clear picture of how the terms of reference will properly prepare for an effective negotiating process, as Mr Guterres himself has asked.”

He said that the Greek Cypriot side is looking forward to the meeting with Lute in order to enter into the process of agreeing on the terms of reference, because the aim is to relaunch the settlement negotiations as soon as possible to reach a comprehensive solution.

“In this direction, of course, we should focus both on the (Guterres) Framework and on the six parameters proposed by the UNSG, as well as on the convergences that have previously been recorded, also looking into all other issues,” Prodromou told the Cyprus News Agency.

We believe, he said, “that if there is a positive approach, but also a will and determination by the other side – and especially Turkey – it is feasible to soon have agreed terms of reference in order to begin the negotiation.”

Lute will meet Anastasiades at 10am on Sunday at the Presidential Palace. On Monday she is to meet Turkish Cypriot leader Mustafa Akinci.

According to reports, Lute was to have a meeting on Saturday with UN Special Representative and Unficyp head Elizabeth Spehar and the UN team dealing with the Cyprus problem, to be briefed about developments since her previous visit at the end of October.

Katrougalos, following his meeting with Lute, said the anachronistic system of guarantees in Cyprus can no longer be maintained. He also said that they reiterated with Lute their commitment to solve the Cyprus problem based on UN decisions.

The Greek official said that his country’s position is that the Cyprus problem is a matter of implementing international law.

Following his meeting with Lute in Ankara, Cavusoglu tweeted: “We expressed to the UN Secretary-General Antonio Guterres’ temporary Special Envoy on Cyprus Jane Holl Lute that only a fruitful dialogue in which everyone can talk to each other can make a solution possible in Cyprus”.