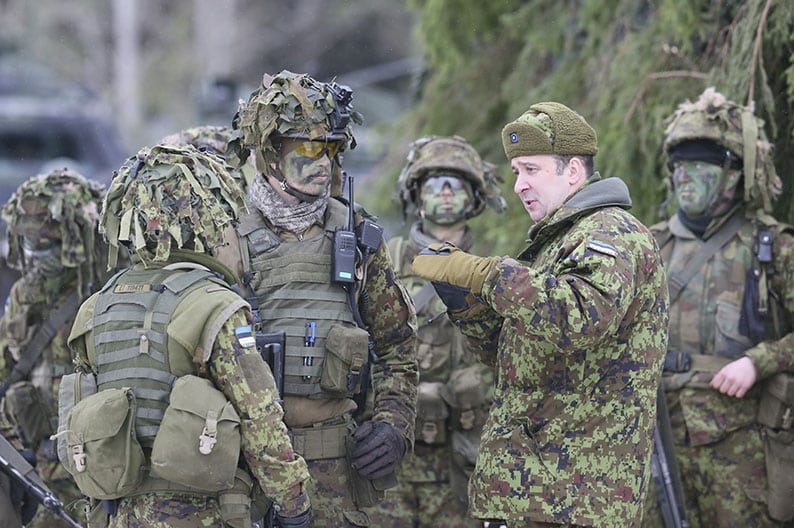 A Nato exercise in Poland. Critics see Nato and the EU as acting hand-in-glove and becoming increasingly two wings of a single military entity

Like other member states, Cyprus has signed up to Pesco which critics say means nations are effectively sub-contracting their militaries out to the EU, thus ceding their sovereignty

A year ago, when the European Union was rolling out its Permanent Structured Cooperation (Pesco), some commentators cautioned that we were witnessing the birth pangs of an EU military structure, an essential ingredient in the creation of a European super-state.

At the time such warnings were waved off as hyperbole or ‘conspiracy theory’. Today, EU leaders – including President Nicos Anastasiades – are freely speaking of an ‘EU army’.  And meanwhile Cyprus’ own involvement in Pesco is picking up steam.

Before going any further, it cannot be emphasised enough that the phrase ‘EU army’ is a misnomer. The bloc is not out to establish its own armed forces out of scratch. Rather, it’s becoming increasingly clear that the goal is to integrate the existing militaries of EU member states. Thus, the correct term would be EU military unification.

David Ellis, a journalist who has been tracking the issue for years, says it’s vital to make that distinction.

In an email, Ellis, director of Strategic Defence Initiatives, told the Sunday Mail:

“I stress that the EU is seeking to unify national militaries under single-point command and control of all defence services in the EU zone. Why create a military or defence industry of its own when the EU can commandeer the existing ones for free?

“The EU will then issue tax bills to pay for what is now its own military structures. Therefore, this is in no way an ‘EU army’ on initial ownership grounds. Besides, we see that all armed services are within the scope of EU military unification.”

He adds: “In the British armed services, this has already been seen to include the Royal Navy, the Royal Marines, the Paras, the special forces, the Army and the Royal Air Force. Only when we call this move by its correct name will policymakers appreciate what has been done under their noses.”

To illustrate, Ellis cites the example of Northwood Headquarters in Hertfordshire, England.

According to the British government’s website, “the facility is located in Bldg 410, in the same building as Pjhq, and part of it has already been activated to provide an OHQ for command of the EU-led Counter-Piracy operation (Op Atalanta).

“The whole facility provides essential infrastructure for a multinational staff based around a PJHQ Nucleus and is provided with a direct secure communications link into Brussels.

The fact Northwood HQ has a direct comms link to Brussels is very telling, Ellis says.

He, as well as others, have long been warning of the danger of nations effectively sub-contracting their militaries out to the EU, thus ceding their sovereignty. After all, they argue, how can a state be truly sovereign without full control over its military?

The counter-argument is that such fears are exaggerated, and that the EU’s scope will be restricted to police actions and humanitarian missions.

That may be true for now. But with the ongoing integration of member-states’ militaries, and the structures and bureaucracies built to facilitate joint operations, it is not a stretch to anticipate individual nations slowly but surely losing flexibility in their respective foreign policies.

Are concerns over loss of sovereignty misguided? During a speech before the plenary session of the European parliament, on December 11 in Strasbourg, the EU’s High Representative for Foreign Affairs and Security Policy Federica Mogherini laid it all out.

She stated: “I think we agree no single European country can respond effectively to any of the challenges of our times, and I think we agree that we, the European Union, have a responsibility to embrace our role as a global power, working together for peace, security and human development worldwide and, in some cases, even filling a gap.

“None of our member states is big enough in the world of today to pursue their own national interests all alone.”

Mogherini went on to say: “When we join forces, as Europeans, and take part in global negotiations we are not giving up on our sovereignty. On the contrary, we are exerting our sovereignty more fully, more powerfully, on the global stage.

“Yes, we are investing in Europe’s hard power – finally – and we would all prefer that we lived in a world where this was not necessary.”

Mogherini then sought to square the circle, resorting to verbal gymnastics as a sop to those who might still harbour concerns over loss of sovereignty. She coined a new phrase: cooperative autonomy.

“There is no contradiction between investing in Europe’s strategic autonomy and cooperating even more closely with our partners,” she said.

“On the contrary, we Europeans are taking more responsibility for our own security and for the world around us, and we are doing this together. Together with the United Nations, together with Nato, together with the African Union, together with all our partners around the world. Rather than discussing whether we have to choose between strategic autonomy or cooperation, I would say we have chosen the path of cooperative autonomy.”

And providing a glimpse of what lies ahead, Mogherini stated:

“Our two command centres, civilian and military, will work now more closely together. On the military side, our command centre should be ready by 2020 to also run small-scale executive operations, so going beyond what it is doing now, which is commanding, training and advisory missions.”

Since a year ago, a great deal has happened. An initial list of 17 projects to be developed under Pesco was adopted by the European Council on March  6 of this year. Then, on November 19, the Council adopted a second batch of 17 additional projects.

“A year on from the agreeing of Pesco, we see EU member states openly speaking of a pressing need to open up military mobility, which some are also designating ‘military Schengen’. In practice, this means putting protocols in place to move entire battalions and naval groups from western and southern EU member states up to the maritime and land borders of Russia at a couple of days’ notice, as well as rolling out mobile airstrips in front-line member states.”

Thomson, who like Ellis is a frequent contributor to UK Column, added: “Nato and the EU are acting hand-in-glove in all of this planning and are increasingly two wings of a single entity. It is all there to read in publicly-available policy documents and public speeches, if people would but look.”

Where does Cyprus fit in all this? On December 12, in Strasbourg, President Anastasiades said:

“Although we recognise Pesco as a decisive step, our vision remains the military independence of Europe, the creation of the Euro-army, a power body to shield its borders to serve the defence interests of the union.”

One of these is the Joint EU Intelligence School which, according to media reports, will be based in Cyprus.

The Sunday Mail tried to confirm whether the intelligence school will indeed be located on the island, but government sources were unable to respond in time for this report.

In his remarks in Strasbourg, Anastasiades made a tangential link between Cyprus’ participation in Pesco and the series of tripartite alliances the island has concluded with eastern Mediterranean nations.

He said: “The establishment of tripartite cooperation is particularly beneficial for the EU, mainly in the energy sector, contributing to the desired energy security and diversification of energy sources and supply corridors to the union.

“It is also very important that the EU remains clearly in solidarity in the Republic of Cyprus as regards the exercise of sovereign rights for exploration and exploitation of natural resources within its EEZ,” he added.

The remarks seem to shed light on how Cyprus perceives its participation in the EU’s Common Security and Defence Policy.

Legal sources tell the Sunday Mail that although the Cypriot constitution does not explicitly state who has ultimate authority to sanction military action, it’s understood that such powers are vested with the executive and therefore the president will be responsible to decide.

Independently of Anastasiades’ comments, Thomson connected the dots in what he says is the emerging geopolitical jigsaw puzzle in the region.

“My strong impression is that this EU/Nato military blob has not yet agreed its intelligence-sharing arrangements, either strategically or tactically – that is, either in terms of winning wars or winning battles.

“Given that observation, the EU’s Joint Intelligence School is not a particularly surprising departure. Its constellation as a Greek-led, Cyprus-based entity reinforces to me the indications of the past year that a French military alliance has suddenly grown in the eastern Mediterranean and neighbouring regions, with a particular aim of containing Turkey, securing hydrocarbon resources and assisting Israel.”

“This alliance draws particularly upon the Eastern Orthodox nations and Egypt as France’s local partners, and in the near future might well be expected to encompass the Visegrád Four nations as well, which Israel has been assiduously wooing. France’s officer school at St Cyr is increasingly taking it upon itself to train the junior officers of Balkan and Levantine countries and is leapfrogging Sandhurst in that respect, despite Britain’s long-established alliance with several countries in the region. The upshot of this will be that French, and EU military union, doctrine will prevail in the military minds of the next generation in the Eastern Mediterranean.”

For his part, Ellis offers:

“Pesco is but one part of the EU’s defence structures, and we see these expanding daily. It would naturally follow from this that the EU would take an ever greater slice of the British military interest on strategically-located Cyprus, including the GCHQ intelligence collection bases and RAF Akrotiri.

“To wage a war – which might be dressed down as a ‘fight’ – in what it calls its Eastern and Southern Neighbourhood, the EU is going to need that presence.”

*The Sunday Mail would like to thank David Ellis, Alex Thomson and UK Column News for the resources provided in the writing of this report

Demonstrators strip naked in Barcelona to protest at fur, leather use