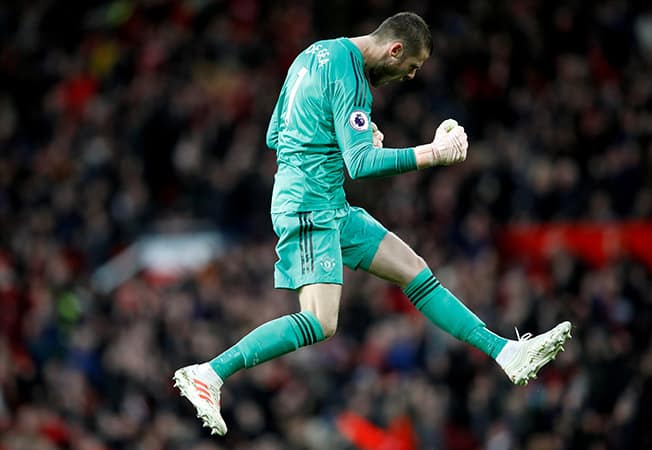 EVEN Manchester United’s reliable last line of defence David De Gea has struggled for form this season but the Spanish keeper will need to be at his best in Sunday’s clash with bitter rivals Liverpool at Anfield.

Last season’s Premier League Golden Glove winner has not looked himself since some uncharacteristic mistakes undermined Spain’s World Cup campaign and they went out in the last 16.

De Gea’s struggles have continued into this season as United sit sixth in the Premier League, 16 points behind the leaders. He had conceded 26 goals in 16 games whereas last season he let in only 28 in 37 appearances.

The 28-year-old may not, therefore, be relishing Sunday’s showdown with Liverpool’s back-in-form forward Mohamed Salah, who scored a hat-trick last week in a 4-0 win at Bournemouth that sent Juergen Klopp’s side to the top of the table and struck the vital winner against Napoli in the Champions League on Tuesday.

He has not been helped by manager Jose Mourinho chopping and changing his defence, but De Gea looks low on confidence and not the same formidable barrier that had him linked with moves to Real Madrid, Juventus or Paris St Germain.

With his contract due to be up next year De Gea might have been distracted by thoughts of a move, although United have now activated a one-year extension meaning an escape from Old Trafford may now depend on someone being willing to pay big money.

His form at the moment means his stock has slipped although if he can keep out Liverpool’s free-scoring triumvirate of Salah, Roberto Firmino and Sadio Mane on Sunday then he will at least put his price back up.

His opposite number at Liverpool Alisson has made a flying start to his Premier League career, keeping 10 clean sheets.

Former Liverpool and United midfielder Paul Ince is torn on who would take the number one jersey in a combined team.

“If you look at reputation you’d say David de Gea but De Gea has made a few mistakes this season, and if you’re looking at what’s happening this year then Alisson would start,” Ince told the Mirror newspaper this week.

United, beaten 2-1 by Valencia in the Champions League in midweek, have drawn 0-0 on their two most recent trips to Anfield and according to their former midfielder Darren Fletcher would be well-advised to adopt another safety-first approach.

“Manchester United are not drilled enough, they don’t have enough patterns so to go and do that, to play Liverpool in an open game, would be suicidal,” he told the BBC.

Liverpool, bidding for a first league title since 1990, will go into the match extra motivated should Pep Guardiola’s City reclaim top spot on Saturday by beating Everton at home in the day’s early kickoff.

Signs of public shift over a solution