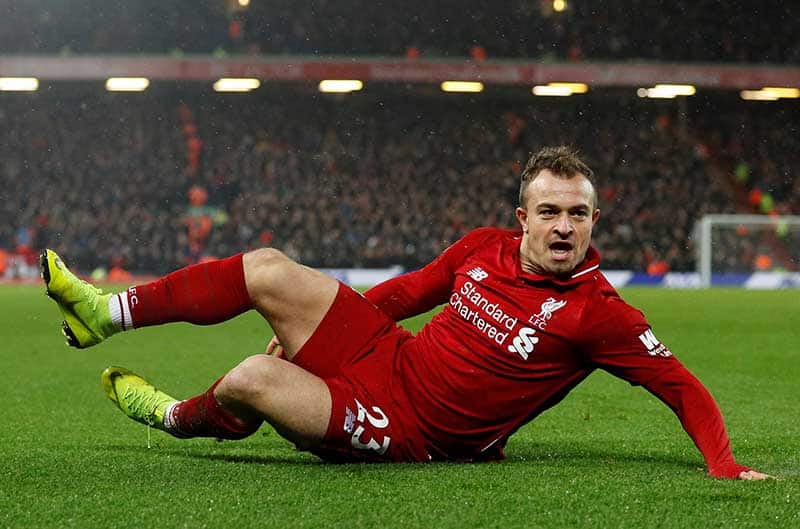 Liverpool's Xherdan Shaqiri celebrates scoring their second goal REUTERS/Phil Noble EDITORIAL USE ONLY. No use with unauthorized audio, video, data, fixture lists, club/league logos or "live" services. Online in-match use limited to 75 images, no video emulation. No use in betting, games or single club/league/player publications. Please contact your account representative for further details.

Liverpool roared out of the traps at Anfield and took the game to Jose Mourinho’s side, grabbing the lead in the 24th minute when Sadio Mane chested down a pass from Fabinho and slotted past David De Gea.

Against the run of play, United drew level in the 33rd minute when Liverpool keeper Alisson Becker spilled a harmless low cross from Romelu Lukaku and Jesse Lingard pounced on the loose ball to find the net.

The hosts continued to dominate but it was not until the introduction of Swiss international Shaqiri that the game turned decisively in their favour.

Mane’s pull back from the byline took two deflections as it ricocheted to Shaqiri on the edge of the area and his shot flew off Ashley Young and into the top corner to make it 2-1 in the 73rd minute.

Seven minutes later fortune was on Shaqiri’s side again as another deflected shot, this time off Eric Bailly, beat the helpless De Gea.

Unbeaten Liverpool have 45 points from 17 games with champions Manchester City, who beat Everton 3-1 on Saturday, a point behind.

It was the Londoners’ first defeat in 23 games and meant they lost ground on fourth-placed Chelsea, while Southampton moved out of the bottom three.

Danny Ings, back after injury, headed two fine goals in the first half from equally good crosses by Matt Targett and Nathan Redmond.

In between, Mkhitaryan drew Arsenal level with a header of his own and early in the second half he scored via a big deflection.

Yet in the 85th minute Austin, who had come on for the tiring Ings, headed in a cross by Shane Long.

The win sent Southampton above Burnley into 17th place while Arsenal remained fifth in the table.

BRIGHTON & HOVE ALBION 1 CHELSEA 2
Dec 16 (Reuters) – Chelsea consolidated fourth place in the Premier League with a 2-1 win at Brighton & Hove Albion on Sunday that became harder work than had seemed likely in the first half.

Having won 4-0 at the Amex Stadium last season, they were on course for a repeat after taking a 2-0 lead at the interval.

Eden Hazard set up the first goal for Pedro after 17 minutes and scored the second himself before halftime following a defensive error.

Brighton came back into contention through Solly March’s goal midway through the second half and Lewis Dunk went close to an equaliser.

The home side have not beaten Chelsea in any competition since 1933 but they stayed 13th in the table, nine points clear of the bottom three places.

Chelsea manager Maurizio Sarri felt Hazard, whose goal was his first since October, could have done even better, and will do when he recovers full fitness.

“I think that Hazard could have played better because his level is a very high level,” said Sarri.

“He can do more. But I think after the two injuries, he lost the physical condition.

“Now he’s improving. In one or two matches he’ll be back at the top.

“I think that we played a good match, we could have won by more goals.

Hazard, who had been outstanding when scoring twice in the 4-0 January win, made the opening goal with his ninth assist of the season.

Regaining possession after his shot was saved, he played a perfect pass to give Pedro a tap-in.

Brighton contributed to their own downfall 12 minutes from halftime with a poor clearance by Leon Balogun.

Willian intercepted and from his own half sent Hazard through to beat goalkeeper Mat Ryan.

From a position of apparent comfort, Chelsea came under pressure after Marcos Alonso had crashed a shot against the post.

The home team revived, halving their deficit when Bernardo headed back across goal for March to score, but Chelsea held on for an important win.

“We knew we needed to score a third goal, but we didn’t and conceded,” Hazard said. “You feel the pressure, but we managed the game well.

“We want to be top of the league at the end of the season. We know Man City and Liverpool are good teams and we don’t want the gap to be big.”

Brighton’s manager Chris Hughton said: “They had two chances in the first half and scored two goals. We started the game well but you can’t give them the leg up by going behind.

“But I can’t fault the effort our players put in.”

Clashes in Brussels as thousands march against U.N. migration pact