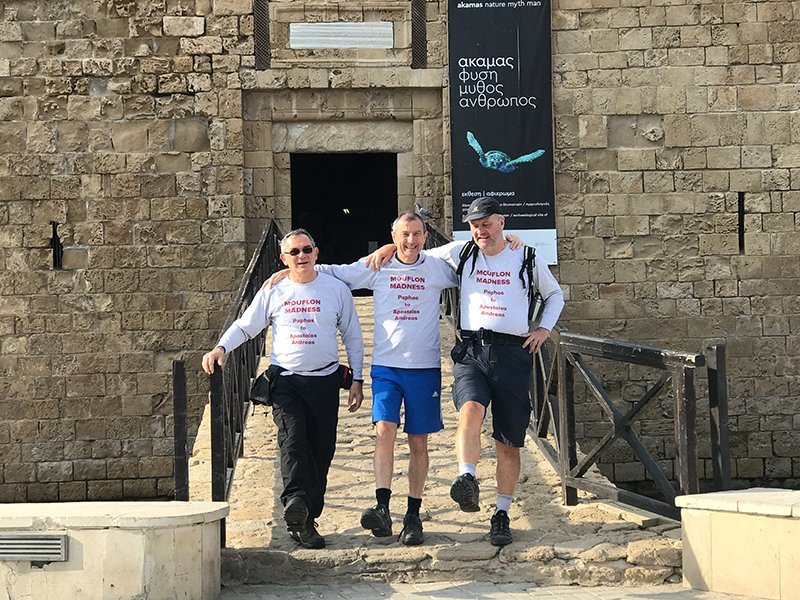 He’s climbed Kilimanjaro, walked the Inca Trail, and white-water rafted through the Grand Canyon. But it’s his firsts that Robert Kyprianou, Chairman of Eurobank Cyprus and modern-day adventurer, is most proud of; probably because they all relate to Cyprus…

He reels off a list: the first Cypriot at Brasenose College, founder of the first scholarship for Cypriots attending the University and, just possibly, he’s the first person of Cypriot origin to attend Oxford University, something he’s “claiming until otherwise disproven!” He’s also the first to cycle the perimeter of the island – a calf-crunching journey made five years ago, at the age of 60 – and, as of November 30, the first to walk the island from tip to tip in one go…

“I like,” says Robert, “being the first. At this age you begin to think about being remembered – leaving a legacy. So it’s always helpful to claim to be the first at anything. I’m 65 now,” he chuckles. “I don’t know how much longer I have left! So the things I do are centred increasingly on this little island; a place I’m proud and honoured to call my country of origin.”

Although born and brought up in England, Robert has maintained a strong connection with Cyprus over the years. “I spent endless summers at my grandfather’s village in the north; I remember the old Cyprus well. And, when you’ve reached my age, you begin thinking about your roots…” 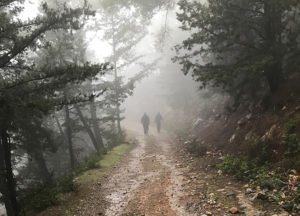 That’s part of what prompted his recent journey, a 200-mile walk from Paphos to Apostolos Andreas. “Every five years I set myself a big challenge,” he reveals. “On my 60th birthday, it was cycling the entire perimeter of the island; five years on, and I wanted to explore the interior, immerse myself in my origins. The more I’ve learnt and seen of Cyprus, the more I realise what an astonishing place this is: city kingdoms, Crusaders, Venetians, Ottomans… they’ve all left their mark, be it a fortress, a castle, a church or a mosque. I’m so impressed by this richness of history; I feel we don’t celebrate it enough.”

This, he explains, is the second reason for his recent walk. “You ask the average tourist about Cyprus, and they talk about sun, sea and sand. But we’re so much more: a wonderful cocktail of history, landscape and people which, in my own small way, I wish to promote.”

Joining forces with two friends – his 60-year-old brother-in-law Nick Roberts, and 62-year-old Len Williamson, experienced walkers both – Robert began his epic journey on the western coast. “The idea was to get to Apostolos Andreas in time for the saint’s Name Day at the end of the month. We knew it would be a challenge even before we’d begun,” he acknowledges. “The logistics of planning, finding places to stay and people to feed us were the biggest difficulty, but there were certainly times en route when we questioned why we were doing this…”

But do it they did. Beginning from the Paphos Castle on November 13, the trio set off up the Diarizos River Valley towards Platres, taking in the Caledonian Falls on their route to Troodos Square. Heading east on the E4, a little-known long-distance European pathway, they passed the UNESCO churches in Lagourdera and Ayiasmati heading towards Ayios Epiphanious, before turning north to Nicosia on the Lakatamia River Trail. A brief rest day in the capital, and the walkers crossed to the north on November 22. There they met up with well-known walking guide and environmentalist Tugberk Emirzadi who accompanied them along the Besparmak Walking Path: a route they followed from Buffavento to Kantara and on into Rizokarpaso towards their final destination, Apostolos Andreas.

Having completed a route of 200 miles, the walkers arrived at the monastery on November 29, just in time for the evening service. And, at 8.30am on the following morning, exactly as they’d hoped, the trio was able to join the hundreds of congregants celebrating the saint’s Name Day. “That,” says Robert, “marked the end of the trail for us. We’d done it. 16 days, 200 miles, having climbed a sum total of 36,000 feet. It wasn’t easy – those inclines really put our resolve to the test! – but we’d walked across Cyprus and seen some of the most beautiful scenery and sites the world has to offer.

“We’d also,” he adds, “met any number of wonderful people – the hospitality was amazing – and enjoyed experiences very much out of the ordinary. One afternoon we were caught, high on the Pentadaktylos, in an electrical storm the like of which I’d never seen!” Lightning splitting the skies, thunder rolling overhead, the group were soaked to the skin when an almost direct strike threw them to the ground. “There arose from the earth the most incredible smell of sulphur… Now that,” he exclaims, “was a near-death experience!”

In contrast, there were many poignant moments along the way. “Looking down from the Kyrenia Range over both my grandfather’s and grandmother’s villages, places I’d spent much of my youth, was incredibly moving,” Robert discloses. “It brought back so many memories: day trips to Kantara on a rickety old bus, picnics in the hills; the life I’d known as a child.”

But the over-riding takeaway, he concludes, is the pure richness of history and unique beauty that Cyprus has to offer. “In actuality, we could have chosen a flat path all the way. But why cheapen the route? By taking the harder path, we experienced so much more of the island’s unique heritage and breath-taking landscapes: the painted churches of the Troodos Mountains, the isolated serenity of the Karpas ridge. Granted, the logistics of planning this walk were actually harder than the journey itself, and finding places to stay and breaking the language barriers would have been almost impossible without Tugberk’s help,” he adds. “But we came away with the sound belief that, though Cyprus is oft known for its troubles, what we should really be celebrating and promoting is our richness of people, history, and culture.”