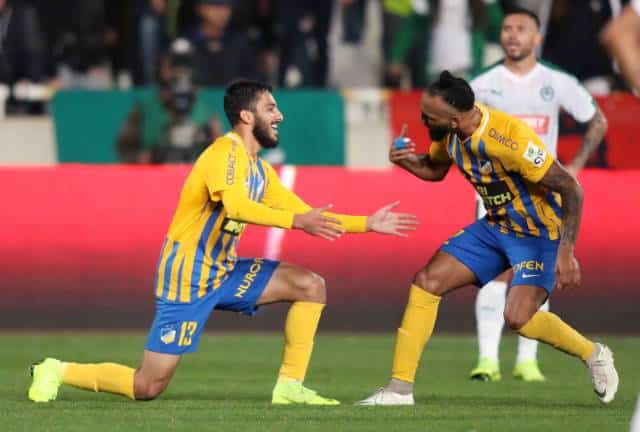 Apoel were the winners of the big Nicosia derby, beating Omonia 2-1 to keep the pressure on leaders AEL who 24 hours earlier had defeated Doxa Katokopias in a seven-goal thriller.

Alki moved off the foot of the table with an impressive 4-2 win over Ermis Aradippou while the two other weekend games ended in draws.

Anorthosis and Pafos shared four goals at the Antonis Papadopoulos stadium while Nea Salamina and Enosis fought out a goalless draw.

Apoel’s Jordanian striker Moussa Al Tamari produced a moment of magic in the 69th minute to secure all three points for his team against bitter rivals Omonia in a game where the champions had to come back from a goal down to clinch victory.

Apoel fully deserved their win, but they were made to work hard by Omonia who defended well and managed to stifle Apoel’s forward line, especially in the first half of the game. When Omonia’s defensive barrier was breached they had goalkeeper Panagi in fine form denying Zahid (twice) and de Vincenti.

Everything seemed to be going according to plan for Omonia especially after Jordi Gomez gave them the lead on the half hour with a sublime strike, beating Apoel’s goalkeeper Boy Waterman from 35 metres out.

However Mousa al Tamari, who had been quiet for the first hour of the game, had other ideas. In the 66th minute he latched on to Ensue’s clever back heel to beat Panagi and three minutes later he skipped past three players before beating Panagi with a low drive from the edge of the box.

This was Apoel’s 13th consecutive win against their arch-rivals and kept them firmly in the hunt for the championship.

Omonia were well organised at the back but going forward they were poor while last season’s top scorer Matt Derbyshire cut a forlorn figure upfront unable to make any impact on the match.

In a game where the lead changed hands three times, leaders AEL had the last laugh as they managed to defeat Doxa Katokopias 4-3.
Hurado had given AEL an early lead but this lasted just a few minutes as Carlos equalised in the 12th minute.

There were no more goals until just after the hour mark when Hadivassilis gave his team the lead but two goals by Makris and one by Lafrance in the space of just six minutes turned the match on its head giving AEL a two-goal cushion.

Mitrea pulled one back for Doxa in the 82nd but AEL managed to see out the final minutes and hang onto the three points.

Anorthosis’ revival under new coach Jurgen Streppel came to a halt against Pafos FC as they could only manage a 2-2 draw.

Nemec thought had the last word as he equalised midway into the second half.

The final game of the round took place on Monday night and turned out to be a thriller, with Apollon drawing 3-3 with AEK.