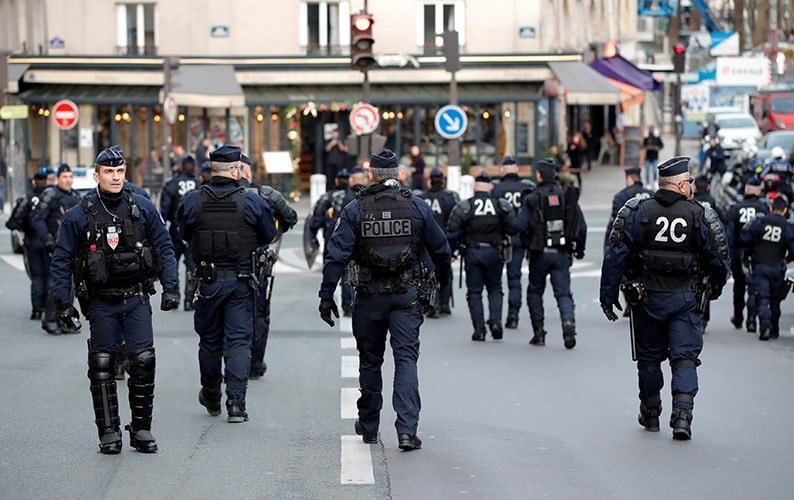 French CRS police walk in a street during a demonstration by students and high school students in Paris, France, December 18, 2018

French “yellow vest” protesters caused transport chaos on Tuesday after occupying highway toll booths and setting some of them on fire.

France’s biggest toll road operator, Vinci Autoroutes , said demonstrations were under way at some 40 sites in its network and that several highway intersections had been heavily damaged, notably in the south of France.

The Bandol toll station, east of Marseille in the south of France, suffered fire damage overnight into Tuesday and the A50 highway was closed, said Vinci, whose network is mainly in the south and west of the country.

“Motorists should take utmost care as they approach toll gates and motorway access ramps due to the presence of numerous pedestrians,” Vinci said in a statement.

Several people have died in roadside accidents at yellow vest roadblocks in recent weeks, mostly at the many roundabouts blocked by groups of demonstrators.

The ‘yellow vests’ protesters – named after the fluorescent jackets French motorists must have in their cars – have blocked roads and roundabouts across France since mid-November.

The demonstrations began as a protest against fuel tax increases, but have since grown into a bigger backlash against the policies of French President Emmanuel Macron.

Over the past four Saturdays, demonstrators have torched cars, looted shops and clashed with police in Paris and other French cities, although protests in the capital last weekend were smaller and more peaceful than previous ones.

Radars-auto.com, a site that tracks traffic radars, estimated that by the middle of last week at least 1,600 radars, about half of all French traffic radars, had been damaged. More than 250 have been entirely destroyed, it said.

The French state will also lose several tens of millions of euros in revenues, it said, adding that in 2017 the radars had yielded on average €84m per month.

Vinci estimates the damages to its installations will cost “several tens of millions” of euros since the start of the protests, not including lost revenue as the protesters have allowed thousands of motorists onto the highways for free.

Vinci plans to send an invoice to motorists who drove past the toll booths without paying and whose licence plates were captured on surveillance cameras in the past four weeks.