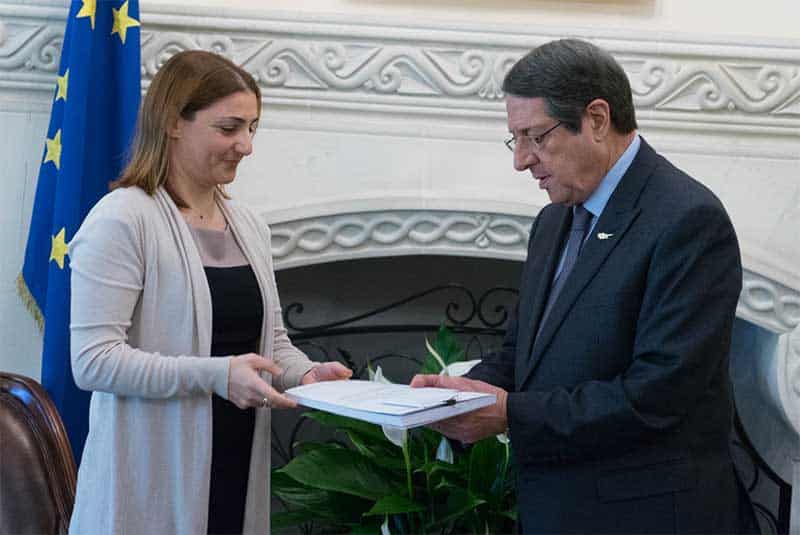 President Nicos Anastasiades on Tuesday received the annual reports for 2017 from the commissioners for the protection of personal data, for agricultural payments and for gender equality, recognising each sector’s contribution to Cyprus society.

The public is starting to feel that their personal data is being protected sufficiently, the president said upon receiving the annual report for 2017 from commissioner for the protection of personal data Irene Loizidou Nikolaidou.

The commissioner noted that the report covers the period before the implementation of the general data protection regulation, and so 2017 constituted a year of preparation for the regulation, consisting of many presentations, speeches, as well as complaints by the public, “which we have been very responsive to,” she said.

Anastasiades also received the annual report for 2017 from the commissioner for agricultural payments Timis Efthymiou, who assured the president that 95.8 per cent of beneficiaries of the per-hectare subsidy have already been paid, while the remainder will receive funds by Christmas at the latest.

Efthymiou noted that through agricultural payments this year, around €50m will be pumped into the Cyprus economy, while a total of around €1.6bn has been given to the agricultural population since the establishment of the Cyprus Agricultural Payments Organisation (CAPO).

CAPO’s contribution was recognised by the president, who said that during the period when the organisation was first set up, “we had a series of problems with the timely payment of compensations and subsidies to farmers, resulting in their financial inability to fulfil their obligations to the cooperative institutions that existed, or to the banks.”

During recent years, Anastasiades added, the organisation has been properly organised and all beneficiaries have been registered, in this way successfully achieving their payment before the Christmas period.

As such “our farmers benefit, our economy benefits, and we build a smooth relationship with the agricultural population that continues to be one of the pillars of the Cyprus economy,” the president said, adding that recent years have seen diminishing complaints and demonstrations by farmers, enhancing the functioning of the state.

The gender equality report for 2017 was the third annual report received by Anastasiades, from commissioner Iosifina Antoniou.

Anastasiades said that at the moment there are seven different ministerial departments working towards gender equality.

“At some point, these seven gender equality departments must be integrated and made independent of their respective ministries… so as to bring about more effective policies and results,” Anastasiades said, adding that he will be instructing the relevant authorities towards this direction.

‘Unfair for Cyprus to be singled out for golden visa criticism’