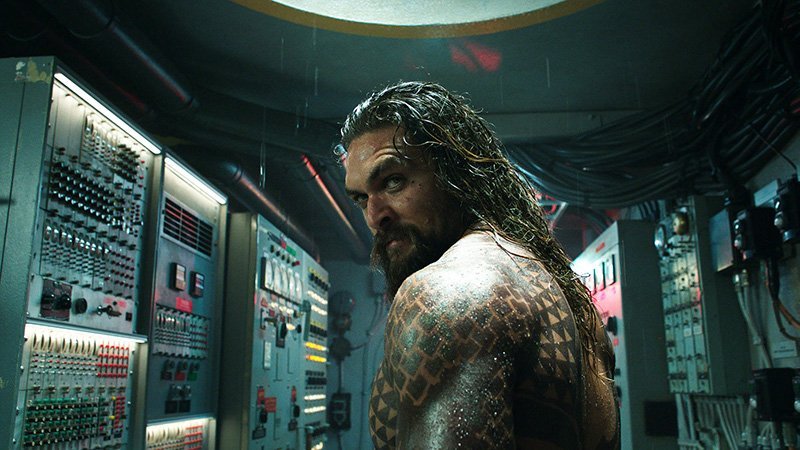 You can guess the last two words spoken in Aquaman without even seeing the movie – especially if I mention that they’re spoken in voice-over. Seriously, think about it. What’s the absolute most clichéd way to end an origin story, the final declaration as our hero accepts his true identity? Except this isn’t even an origin story, since Aquaman (Jason Momoa) already appeared in last year’s Justice League, and mention is made of ‘fighting Steppenwolf’ so it clearly isn’t a prequel. The film is muddled as well as clichéd.

Does it really matter? It’s trendy to berate the superhero films made by DC Comics (except Wonder Woman, which gets a pass for Gal Gadot), contrasting them with the sparkier Marvel Cinematic Universe (MCU) – and they are indeed quite wooden by comparison, yet they’ve all made money. DC appear to have figured out that there’s an audience, especially outside America, of people who either have no childhood experience of comic books (and just want to see an action movie) or actually enjoy the mindless feel of superhero films being square-cut and relentlessly prosaic, as opposed to nudge-you-in-the-ribs snarky. Hence something like Aquaman, epic in length but consistently familiar, from the childhood prologue to the final nail of those closing two words. (If you still haven’t guessed, let me put you out of your misery: “I’m Aquaman.”)

The film finds DC getting cocky, actively courting comparison with their MCU betters: Aquaman is explicitly modelled on a Marvel hero, namely Thor. Both are defined by their weapon of choice (Thor a hammer, Aqua a trident), both are big, affable lugs; Aquaman –a.k.a. Arthur – is “clearly an imbecile,” says Mera (Amber Heard), an Atlantean princess with flame-red hair, and she has a point. ‘Atlantean’, by the way, means ‘of Atlantis’, much of the film being set in that underwater kingdom – and not only does it hinge on sibling rivalry, exactly like Thor, but Atlantis even comes with a gateway bridge, exactly like Asgard. “What’s the point of having a bridge underwater?” wonders Aqua, as if we didn’t know. These are the jokes when one big corporation starts trolling another.

The jokes are indeed weak in Aquaman, partly because the film isn’t sure it wants to make them. What’s an audience to think when villainous Orm (Patrick Wilson) is told that, if he gets the four underwater armies together, “you will be ordained… [pause] Ocean Master!”? What’s the intended reaction when the long-awaited kiss between Aqua and Mera gets the full stereophonic treatment, music swelling like it does at the end of an old black-and-white movie? The portentous tone isn’t playful, exactly (the dialogue is full of weighty nods to “the Creatures of the Trench” and “the Lost Trident of Artan”), but it feels like it’s trying to have it both ways, putting just enough spin so some people – not the people in China but the other people, the MCU-loving people – can laugh if they want to.

In truth, the film isn’t awful (just hackneyed, and incredibly overlong). There’s a vague eco-message and Aqua, despite being “a blunt instrument”, is all about co-existence (he even helps the Russians). Momoa makes a likeable hero and horror maestro James Wan is a welcome presence in a DC movie, doing a few of his trademark shots. There’s one early on, when a strange sea-girl (who turns out to be Mera) is glimpsed in the background then blocked out by Arthur and his dad in the foreground – we know she’s coming closer but we can’t see her, crafting tension as with the ghosts in The Conjuring – and an action set-piece also shows glimmers of invention, the CGI-aided camera soaring from Aquaman to Mera (instead of the usual cross-cutting) as they fight different battles in the same city. A little girl almost gets brained by a giant bell, an Atlantean soldier sticks his head in a toilet bowl to get some water (i.e. oxygen). It’s quite amusing.

Ultimately Aquaman is product, not unlike the MCU films (they just hide it better); it’s a film for kids who’ll go to the Cineplex during the week before Christmas, watch the movie while checking their phones and talking to their friends, and probably cheer ironically when Aqua and Mera kiss (the irony being part of the fun). Even those kids, however, may wonder about one thing. Aquaman’s superpower is being able to communicate with fish and other sea creatures; it’s as much a part of his shtick as scaling tall buildings is for Spider-Man – yet at no point does the film have him ask a swordfish for help, or summon an army of sharks or something. Maybe they’re saving it for the sequel but still, what a missed opportunity. For a film that always does the obvious, Aquaman isn’t very good at doing the obvious.