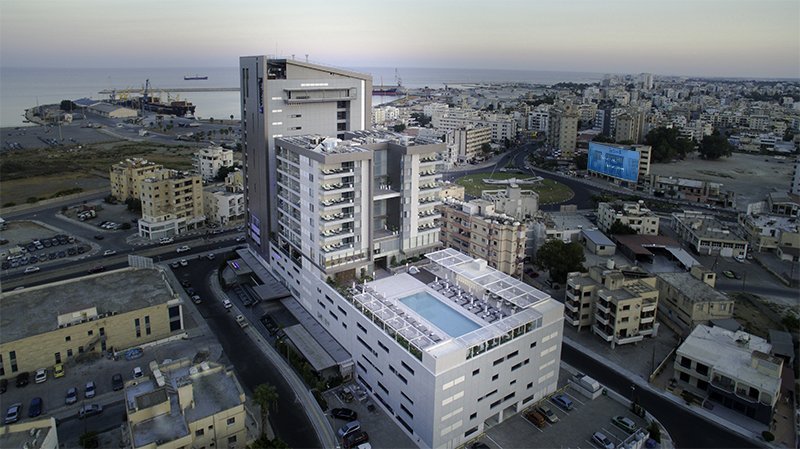 They say love passes through the stomach and if that’s true, the tall, contemporary and recently-opened Radisson Blu Hotel in Larnaca should prepare to be swamped, offering something for all tastes, from its sky-high cocktails to its pillow menus.

But it’s not just about the succulent cuisine at this €40 million investment, the Radisson Blu is Larnaca’s first business hotel and also the first in the town to belong to an international hotel chain.

The hotel’s lobby is impressive with its hip, minimal interior design of earthy colour tones and wooden furnishings but we just passed through before being shown to a comfortable room with a view of the sea, as do most in this 16-storey facility, some of which are the largest in Cyprus, reaching 56m². The luxury of the lobby continued with an in-room Nespresso machine and a rain shower. But there was no time to unwind as it was off to the hotel’s steam bath and sauna for a proper job.

In this quiet and serene establishment, it is hard to believe you are only 15 minutes from the airport. We helped ourselves to smooth bath robes and made our way to the sauna where we sizzled away. Lasting only 15 minutes and after cooling down with an ice-cold bucket shower, we moved to the steam bath, before finally stretching out on large beds outlooking the town. It was a sense of bliss, that even the most preoccupied business travellers can have a quick taste of. 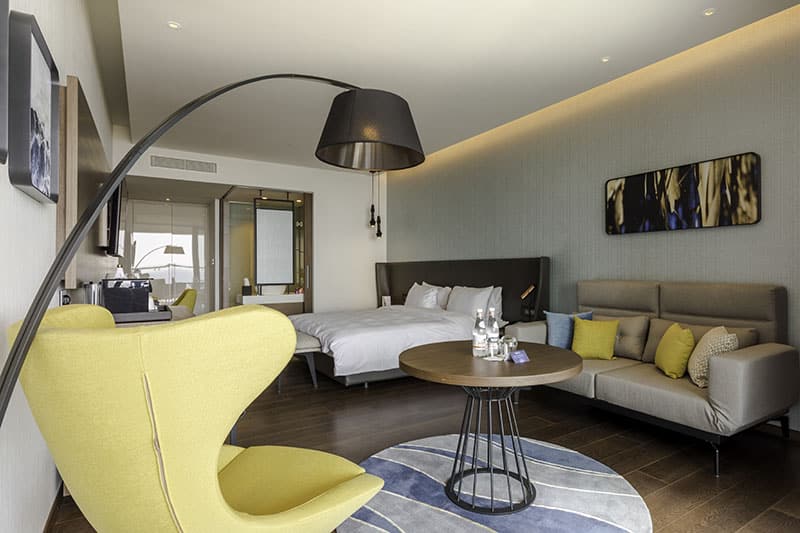 It is not just about making yourself feel good though as the hotel aims to “blend business with leisure”; conference rooms with top technological and audio-visual equipment and furniture are designed for comfort.

But back to the culinary delights served in outlets in the QBlu Plaza on the hotel’s ground floor.

Combining Argentinian parillia grilling and honouring Cypriot flavours with a contemporary twist, Marbre restaurant is a delight for both meat lovers and vegetarians. Their juicy and perfectly-cooked and seasoned steaks and oxtail pastichio were to die for. The choice seemed almost infinite as mouth-watering dishes of Tomahawk Black Angus and aged lamb with red sauce and trahanas were brought to the table. Vegetarians were well catered for with fresh tuna steak and mushroom fricassee.

At this Grill Fusion restaurant, you can watch the chefs at work, “we’re not preparing a restaurant, we’re preparing a scene” said restaurant designer Christos Sokolis pointing to the open kitchen plan that runs under the orders of the 2015 San Pellegrino Young Chef of the Year Alexandros Tsiotinis. “Cooking is a work of art and an empty plate parallels with a white canvas that awaits to be filled with genius,” said Tsiotinis.

The culinary journey didn’t end here. Although rather sated from the Marbre lunch, we took a sweet break to taste Dolce café’s handmade croissants, ice creams and desserts. Inspired by Parisian salons, Viennese open-air cafes and Milan’s espresso bars, Dolce aims to be a cosmopolitan experience. With such a multicultural vibe to it, we briefly forgot we were by Larnaca’s port roundabout as we sipped our rich espresso shots. And it’s not just cakes and coffee that’s on offer. In the evenings, Dolce turns into a lounge bar serving excellent wines, tasty light bites and signature cocktails. 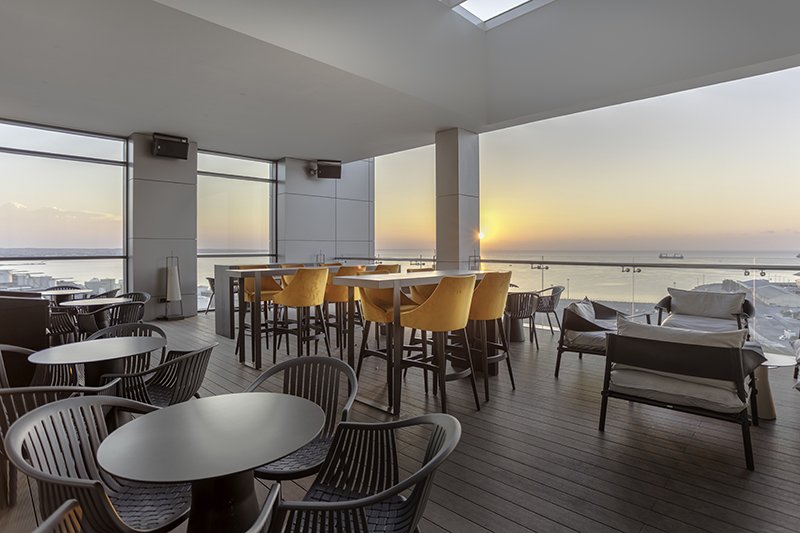 With hardly enough time to complete a tour of the hotel and its facilities, it was time for dinner of Japanese-Peruvian cuisine at Ma Restaurant. With a name meaning ‘the space between two worlds’, two cuisines and cultures that you would never think blend, meet at the hands of chef Thanos Stasinos. Japanese mastery merges with Peruvian technique in a cuisine called Nikkei, to create dishes like nothing you have tasted before. From eel fois gras rolls and duck breast in a yellow curry chocolate sauce to our favourite, the refreshing ceviche classico, Ma’s unique dishes are a culinary sensation that has recently swept gastronomeurs off their feet.

In one last stop on our culinary tour we headed to an elevated cocktail experience at the Sky Bar on the 16th floor which offers drinks with spectacular panoramic views of the city.

Having consumed more than can reasonably be expected, we somehow managed to find space the next morning for Radisson Blu’s superfood breakfast. Overwhelmed with a choice of pastries, fresh fruit, yoghurt pots, fresh pancakes and eggs, we dived into everything one final time. It would have been a shame to leave without even looking at the cigar bar, which offers Cuban delights and spirits, but it would have to wait for a return visit as just after breakfast was not the time to do it justice.

In addition to the eateries, the QBlu Plaza is also home to high-end boutique shops, and the biggest range of Swiss watches in Cyprus. Keeping to the high-end theme, the Bluchip gallery is definitely worth a visit not only for its art but its ideology. Featuring only living local and international artists, the pieces are displayed anonymously so people buy the art and not the name. With an appointment-only policy, owner James Dimitriou wants art collectors to come into the gallery rather than buy online to share his passion, engage with them and educate.

Satisfied? We certainly were and when in need of a taste of luxury, or just one more Peruvian dish, we will be back when our waistlines allow. 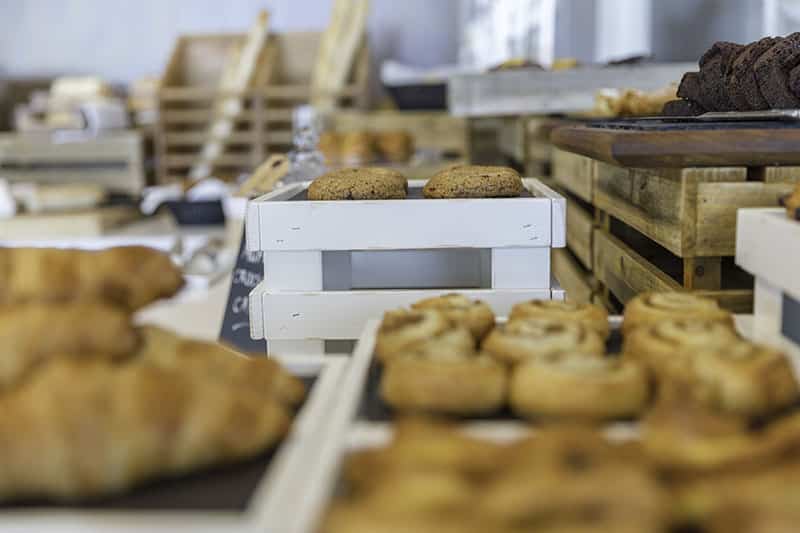 Cavusoglu: zero guarantees and troops is a pipe dream

Pochettino bookmakers’ hot favourite to take over at Man United

What to know about living in Woodland

How we planned a three-day Maasai Mara safari from Cyprus