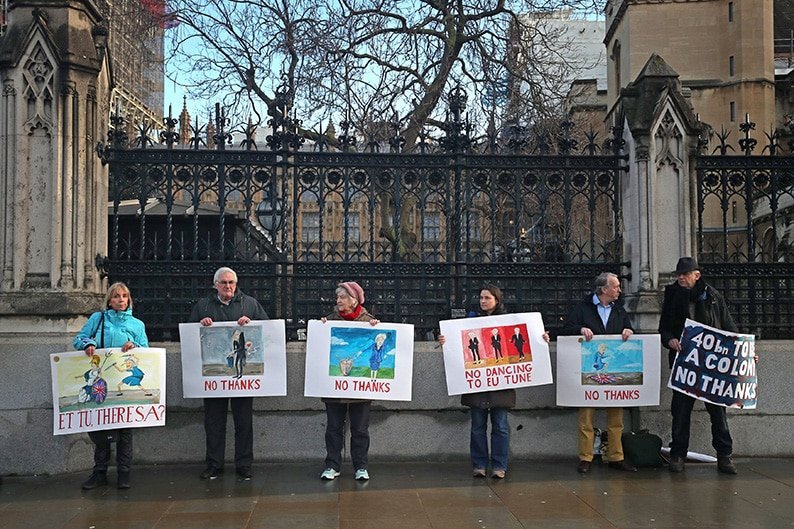 Pro-Brexit supporters hold placards outside the Houses of Parliament in Westminster London, Britain

The British government set out the biggest overhaul of its immigration policy in decades on Wednesday, ending special treatment for European Union nationals while promising to give businesses time to adapt to its post-Brexit plans.

In a long-awaited policy paper on how Britain intends to approach immigration after its exit from the EU, the government said the system would prioritise skilled workers and treat EU and non-EU citizens alike.

Concern about the long-term social and economic impact of immigration helped drive Britain’s 2016 referendum vote to leave the EU, but Prime Minister Theresa May’s promise to end free movement of the bloc’s nationals has left some business leaders worried about the ability to hire the staff they need.

The policy paper did not spell out a specific target for annual net migration, but said it would reduce the number to “sustainable levels as set out in the Conservative Party manifesto”. The pledge in that 2017 election manifesto was to reduce the annual number to below 100,000.

Skilled workers coming to Britain under the new system will have to be sponsored by a company and will be subject to a minimum salary threshold, the level of which will be set following a consultation with businesses over the next year.

There will not be a cap on the number of skilled workers.

There will also be a transitional temporary worker scheme, which will allow EU nationals and workers of any skill level from other “low risk” countries, to come to Britain without a job offer for up to 12 months at a time.

“Our new route for skilled workers will enable employers … to access the talent they need,” interior minister Sajid Javid said in the foreword to the document.

“But we understand this is the most significant changes to the immigration system in more than 40 years, and so employers will need time to adjust.”

Javid said the temporary workers scheme would “ensure businesses have the staff they need and to help employers move smoothly to the new immigration system”.

The temporary workers scheme would be “tightly constrained”, the government said, with no rights to settle, bring dependents or access certain public funds. The scheme will be reviewed by 2025 and could be closed if economic conditions warrant it.

Workers under this scheme must leave Britain for a 12 month “cooling off period” before they can seek to return on another temporary worker visa, the policy paper said.

The government, which will introduce its post-Brexit immigration legislation to parliament on Thursday, said it planned to speed up the processing of work visas and reduce the burden on businesses sponsoring workers.

EU nationals will not need a visa for a tourist visit to Britain of up to six months, the policy paper said, and Irish citizens will continue to be able to travel and work freely in Britain.

The new system will be phased in from the start of the post-Brexit implementation period, currently set to run until the end of December 2020.

A report by the Migration Advisory Committee in September recommended Britain should not give preferential treatment to EU workers.

With just 100 days until Brexit, May is yet to win the support of a deeply divided parliament for the divorce deal she struck last month with EU leaders to maintain close ties with the bloc.

Where will new health scheme leave your healthcare?