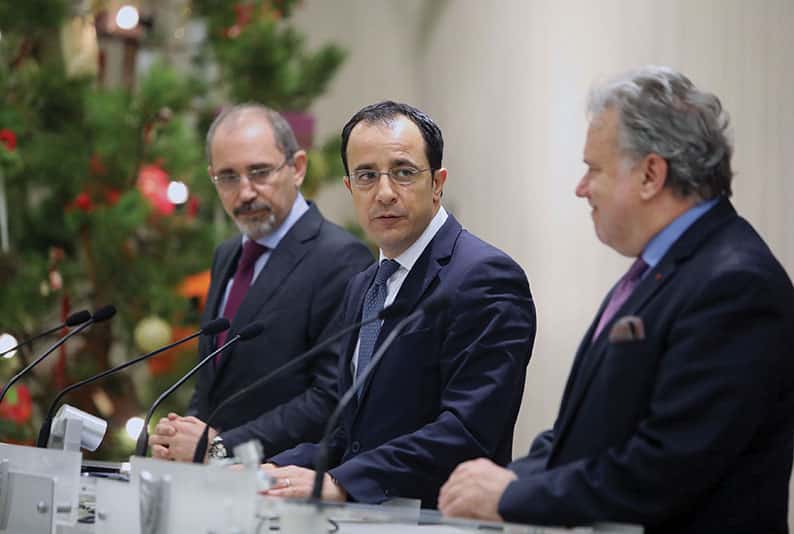 THE US ambassador to Israel will be present on Thursday’s trilateral summit between Cyprus, Greece and Israel in Beer Sheva according to reports on Wednesday, following Russian warnings over a potential build-up if Washington becomes involved militarily in Cyprus.

The Cyprus issue, energy issues and regional developments are among the issues to be discussed during Thursday’s summit.

The summit starts with bilateral meetings between the leaders, followed by a meeting of all three. Extended consultations with the participation of the delegations of all three countries will follow immediately afterwards.

A series of bilateral and trilateral Memoranda of Understanding will then be signed, which will be followed by statements from the three leaders.

Netanyahu will also host a working lunch for the leaders and their delegations. Anastasiades returns to Cyprus Thursday night.

According to CNA, Washington’s ambassador in Israel David Friedman will be present at the summit.  Friedman is said to have been an adviser to President Donald Trump during his campaign.  The US is interested in taking part in the meeting between the three countries to discuss cybersecurity and energy security issues.

In early December, reports that Washington was looking into areas to build potential bases circulated, prompting a Russian response.

“It [Cyprus] is being drawn into US and Nato plans in the eastern Mediterranean,” Russian Foreign Ministry spokeswoman Maria Zakharova said. “In Moscow we can’t ignore the anti-Russian element in these [US] plans and in the event that they are implemented we will be forced to take countermeasures.”

Nicosia responded passively to the threat. Christodoulides had a phone conversation with his Russian counterpart Sergei Lavrov and the issue was deemed closed by the Cyprus government.

On Wednesday Christodoulides also met with his counterparts from Greece and Jordan as part of another trilateral partnership.

The three expressed their dedication to intensifying the cooperation between the three countries.

They discussed the Cyprus issue, Syria, Israel and Palestine terrorism and security, and energy security.  The three ministers also decided to look further into the issue of establishing a permanent secretariat from the trilateral cooperation in Cyprus.

Jordan, Cyprus and Greece are determined to implement the goals of their trilateral cooperation in all fields, having as their main objective peace, prosperity and security for the region, said Mohamad Sharari El-Bakhit El-Fayez, the Ambassador of the Hashemite Kingdom of Jordan to Cyprus.

In an interview with the Cyprus News Agency ahead of the tripartite ministerial meeting, the ambassador said he was convinced that with time, trilateral cooperation would become an institution and expected other countries to be encouraged to take part.

According to the ambassador, the trilateral cooperation was progressing in a smooth and solid way. He added that the meeting would focus on collective efforts to achieve the common goals of the three countries in the region.

He added that the trilateral mechanism enhanced understanding and regional cooperation, in areas such as tourism, energy, agriculture, education and health.

“We leave nothing aside, however discussion takes time. We are finishing in one area of cooperation and moving to another,” El-Fayez said.