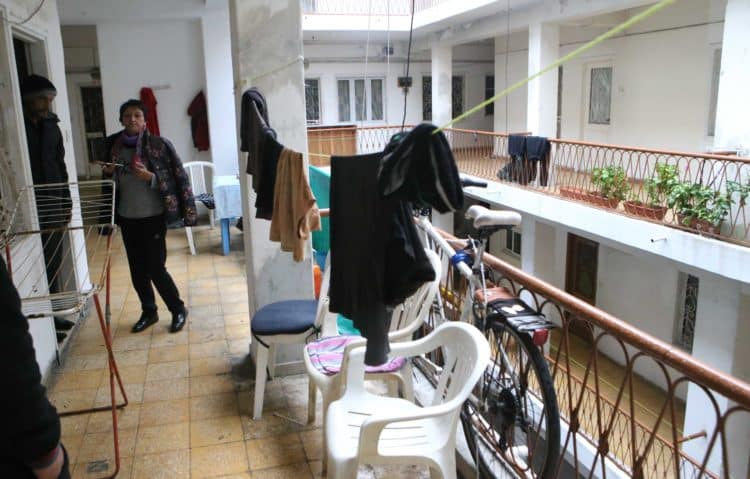 The eviction of some 100 tenants, mostly asylum seekers, on Wednesday from a rundown apartment near Ohi square in Nicosia was conducted without the prior securing of a court order, one of the owners of the building told the Cyprus Mail on Thursday.

“We didn’t have a court order, and we didn’t need one,” he said. “Anyone who was punctual with paying their bills can request our help to find another flat, and others can seek help elsewhere, from the social services, for example.”

While one evicted tenant told the Cyprus Mail that he had received a notice on December 7 which claimed that the building had been sold and that he had until December 15 to move out, the co-owner said that this is not the case.

“The building has not been sold,” he said, nor will it be renovated. “We wanted to clear it up from the dirty, loud and illegal people, since the area is turning into a ghetto. We want new tenants, clean tenants.”

If tenants still refuse to leave, he added, a court order will then be sought.

He also admitted to illegally cutting off the provision of electricity and water in the building, claiming that he was receiving bills amounting to around €4,000 for water and €5,000 for electricity which were not being paid by the tenants. “What do you expect me to do?” he said.

Speaking on Active radio on Thursday morning, his brother and co-owner of the premises, Emilios Emmanuel denied that electricity and water was cut for any of the tenants who had not signed that they would be leaving their apartments, though this was refuted by the Electricity Authority Cyprus (EAC) later on Thursday.

According to spokesperson Christina Papadopoulou, the EAC was informed that the electricity was illegally disconnected on Tuesday night, “though it might have been cut earlier.”

20 fuses had been removed from the meters prior to the day of the forced eviction, which were then reconnected at around 6.30pm on Wednesday, she said, after the incident had made headlines.

State broadcaster CyBC reported that some apartments in the building continued to be without electricity on Thursday.

Papadopoulou told CyBC that “there is relevant legislation which holds the managing committees of apartment blocks responsible for the protection of EAC equipment, such as the metres, for which they can also request keys allowing them access, along with the EAC.”

A police spokesperson confirmed on Thursday that an investigation was underway: “we are looking into all parameters of the conditions under which the tenants were evicted, including whether there was a court order for the eviction and whether electricity was cut illegally.”

One tenant who was given three more days to find alternative accommodation told the Cyprus Mail that while his water and electricity had been restored, “there is still no internet connection.”

Others told CyBC that they had gone to work on Thursday morning and had come back to find that their belongings were being thrown out of their apartments.

Some 50 people continued to hang around the apartment building on Thursday, talking to media or sitting outside their apartments.

The tenants, mostly foreign nationals, argue that the owners had no right to kick them out since their rental agreements do not expire until next year.

The directors of the company, JE Investwise Ltd, maintain that they were forced to take the decision to evict for financial reasons as many tenants failed to pay common expenses and utility bills for long periods and because some of the persons living there were causing public unrest in the area.

The issue came to the fore after news reports that some 100 people living in the building were being given only eight days to find another place to stay causing despair to several tenants who could not afford accommodation elsewhere or who said they were not given enough time to find a new place to live.

The owners of the 24-apartment building near Ohi roundabout told the Cyprus Mail that most of the tenants – around 80 per cent – have been reimbursed and handed over their keys.

Some of the tenants who had been consistent with payments have been given accommodation in other buildings owned by the company.