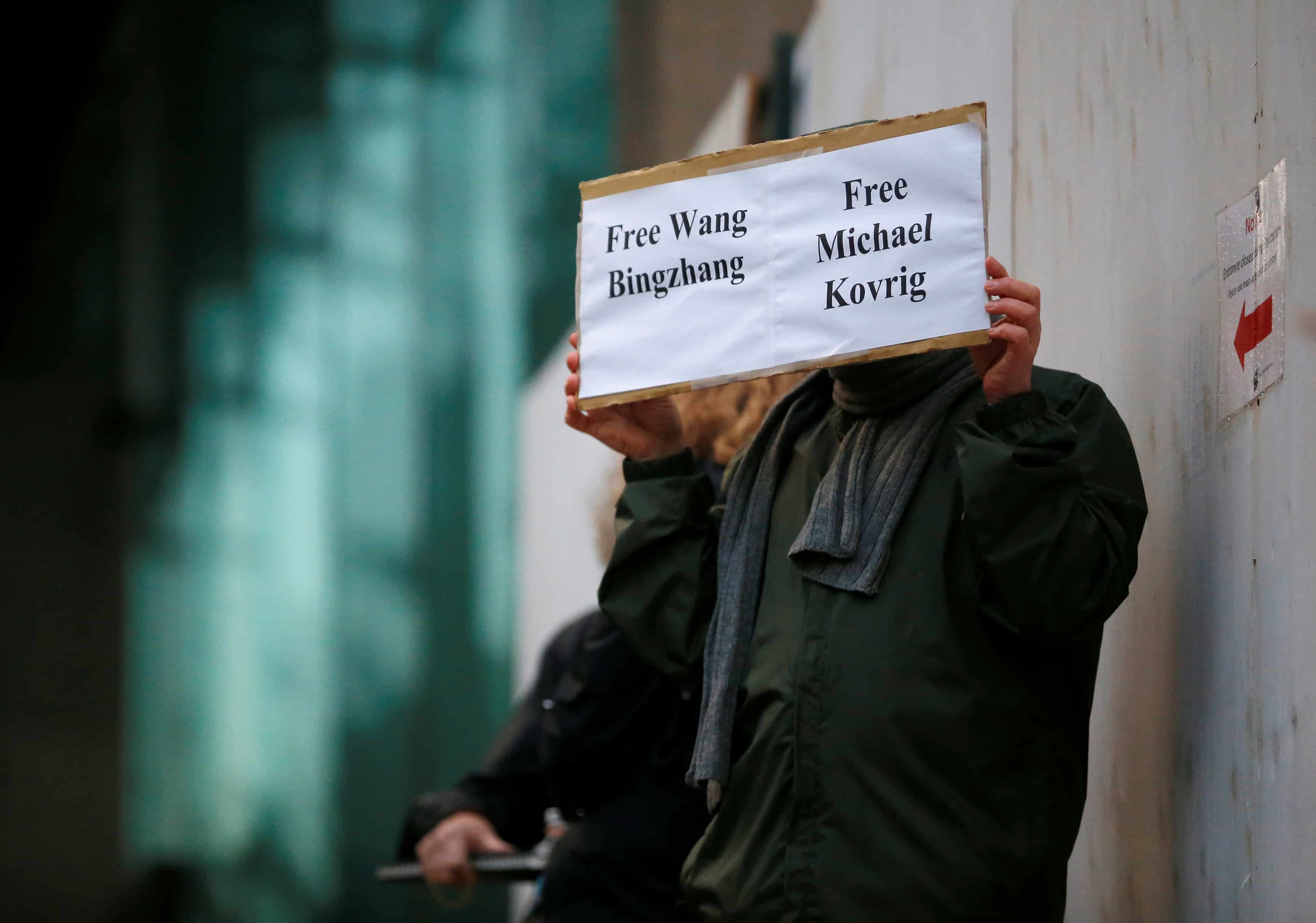 A man holds a sign calling for China to release Wang Bingzhang and former Canadian diplomat Michael Kovrig, who was detained in China on Monday night, at the BC Supreme Court bail hearing of Huawei CFO Meng Wanzhou in Vancouver

A former Canadian diplomat detained in China is being denied legal representation and is not allowed to turn the lights off at night, people familiar with the situation said, offering new details on the closely watched case.

Canada arrested Meng at the request of the United States, which is engaged in a trade war with China. Meng faces extradition to the United States to face fraud charges which carry a maximum sentence of 30 years jail for each charge.

China has given only vague details of why they have detained the two Canadians, saying they are suspected of engaging in activities that endangered China‘s security, and has not drawn a direct link to Meng’s arrest.

Canada has said the detentions are unacceptable and US Secretary of State Mike Pompeo has said China should free the men. ICG President Robert Malley has also called for Kovrig’s release.

The sources familiar with Kovrig’s case said he was taken away at around 10pm (1400GMT) on Monday last week while on a street in Beijing.

Canada only gained consular access to him at a police station on Friday last week, when he was visited for half an hour by the Canadian ambassador and two other Canadian diplomats, the sources said.

He is also only allowed one consular visit a month and is not allowed to see family or loved ones.

“He is physically all right but tired and stressed,” the source said. “Physically he does not appear mistreated.”

Two other people familiar with the case corroborated the details.

A third person said Kovrig was being confined to a single room, but despite the stress remained lucid.

“Our previous comments on this case stand,” said Adam Austen, a spokesman for Canadian Foreign Minister Chrystia Freeland, when asked about Kovrig.

The comments on Kovrig from the sources were made in recent days. All the sources requested anonymity citing the sensitivity of the situation.

Under Chinese criminal procedure law, special forms of detention and interrogation can be used for state security suspects.

Rights groups say conditions in Chinese detention facilities are often basic and can be harsh, with lack of legal representation and due process compounding worries about treatment.

In 2015, a British corporate investigator accused Chinese officials of deliberately withholding medical treatment while he was in jail to try to force him to confess to a role in a scandal involving drugmaker GlaxoSmithKline Plc.

While details are unclear, it is possible Kovrig is being held in a form of detention known as “residential surveillance at a designated location”, according to Hong Kong-based Amnesty International East Asia Research Director Joshua Rosenzweig.

Both the United Nations and Amnesty have singled out this form of detention as “creating a potent environment for abuse aimed at extracting confessions, which are highly prized in China‘s criminal justice system”, he said.

Foreign Ministry spokeswoman Hua Chunying said on Friday the details of Kovrig’s detention and treatment needed to be checked, and referred specific questions to the “relevant authorities”.

The Ministry of State Security, which is leading the investigation into Kovrig, has no publicly available contact details.

“We have already said that China has in accordance with the law guaranteed Michael Kovrig’s lawful rights and humanitarian treatment,” Hua told a daily news briefing.

Canada has been provided “necessary help” to get consular access, she said.

“I don’t know whether you paid attention to the treatment or the human rights of the Chinese citizen who was illegally detained in Canada at the request of the United States?” Hua said, referring to Huawei’s Meng.

A Canadian court last week granted Meng bail. Among conditions of her bail, the 46-year-old executive must wear an ankle monitor and stay at home from 11 p.m. to 6 a.m.

The Canadian government has said several times it saw no explicit link between the arrest of Meng, the daughter of Huawei’s founder, and the detentions of Kovrig and Spavor.

But Beijing-based Western diplomats and former Canadian diplomats have said they believed the detention of the Canadians were a “tit-for-tat” reprisal by China.

If a Canadian judge rules the case against Meng is strong enough, Canada’s justice minister must next decide whether to extradite her to the United States. If so, Meng would face US charges of conspiracy to defraud multiple financial institutions.

No details have been revealed about Spavor’s detention.