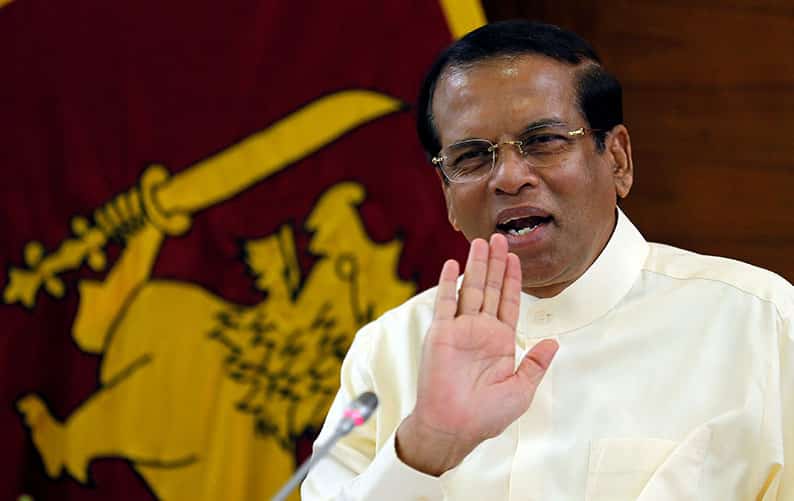 President Maithripila Sirisena is faced with a dilemma – to bury the hatched with his rival or open the door to a former dictator? REUTERS/Dinuka Liyanawatte

YOU could write a heart-warming fairy-tale about the turbulent events in the island nation of Sri Lanka in the past two months. It would involve a conniving president who abruptly and illegally dismisses the elected prime minister, and replaces him with a corrupt and blood-soaked former despot who was the president’s old boss.

The despot, now claiming to be the real prime minister, tries to strengthen his position by offering members of parliament jobs as ministers in his new government. If enough accept, he would have a majority in the parliament and could claim to be sort of legitimate. But most of the MPs turn down the political bribes on offer, and parliament twice votes to reject his claims.

Finally, after 50 days of chaos, the judges of the Supreme Court say that the president has acted illegally and the ex-despot can’t claim that he is prime minister. At this point the despot resigns and the president grudgingly ‘re-appoints’ the legitimate prime minister. Virtue triumphs, and joy is unconfined. Maybe they even live happily ever after.

It’s an engaging tale, and the basic outlines are true, but in the real world the historical and social context that surrounds the events changes the tone of everything.

Sri Lanka is only ten years away from the end of a brutal civil war that lasted for a quarter-century, and the ‘despot’ is the man who won it by being more brutal than anybody else. His name is Mahinda Rajapaksa.

The war was about race and religion. Most of Sri Lanka’s people speak the Sinhalese language and identify with the Buddhist religion. A minority several million strong, concentrated in the north and east, speak Tamil and are mostly Hindu in religion (with a significant Christian minority). Tamils have been in Sri Lanka for at least 2,000 years, but the Buddhist majority tends to see them as alien and even as newcomers.

The Tamils did well under British colonial rule, when most Buddhist Sinhalese refused to collaborate with their new political masters. There was revenge-taking after independence, when Buddhist-dominated governments removed the official status of the Tamil language and imposed restrictions on higher education for Tamils. There were even anti-Tamil pogroms.

Buddhist intolerance towards non-Buddhist minorities is not unique to Sri Lanka, as the Rohingya minority in Burma can readily attest, but in Sri Lanka the Tamil minority was big enough to fight back. It did so, starting in 1987, in a guerilla and terrorist war that sought an independent Tamil state in the north and east of the island.

With his populist, nationalist style making him a favourite with the Sinhalese masses, he seemed set for a very long run in power. His government continued to torture and ‘disappear’ opponents, and his family grew rich from corrupt deals. But in 2015 one of his cabinet ministers, Maithripila Sirisena, defected from the government, ran against him for the presidency – and won.

To his credit, Rajapaksa accepted his defeat. Sirisena found a new ally in Ranil Wickremesinghe, whose business-friendly United National Party had won a majority in parliament, and appointed him as prime minister.  However, the new allies had little in common and estrangement between them grew.

The key issue that broke the alliance was trade: Sirisena preferred to make deals with China, Wickremesinghe with nearby India. On 25 October Sirisena sacked Wickremesinghe (illegally) and appointed Rajapaksa as prime minister instead.

Wickremesinghe pointed out that Sirisena didn’t have the power to do that and barricaded himself into Temple Trees, the prime minister’s official residence. Rajapaksa couldn’t get enough members of parliament to switch sides. They voted twice to remove Rajapaksa, so Sirisena dismissed parliament and called new elections.

That was illegal too, and the struggle continued until, last week, the Supreme Court ruled that Sirisena could not dissolve parliament. At that point Rajapaksa resigned, and on Monday an angry Sirisena grudgingly swore Wickremesinghe back in as prime minister.

An encouraging outcome, in which parliament, the courts and the general population behaved better than anybody expected, but of course the story is never really over.

Sirisena can constitutionally dismiss the parliament fifteen months from now, and Rajapaksa may well win the next election. Meanwhile, Wickremesinghe’s government may be almost paralysed, because relations between Sirisena and him are totally poisonous.

The fairy-tale is to be preferred whenever possible.

A step closer to an east Med ‘alliance’