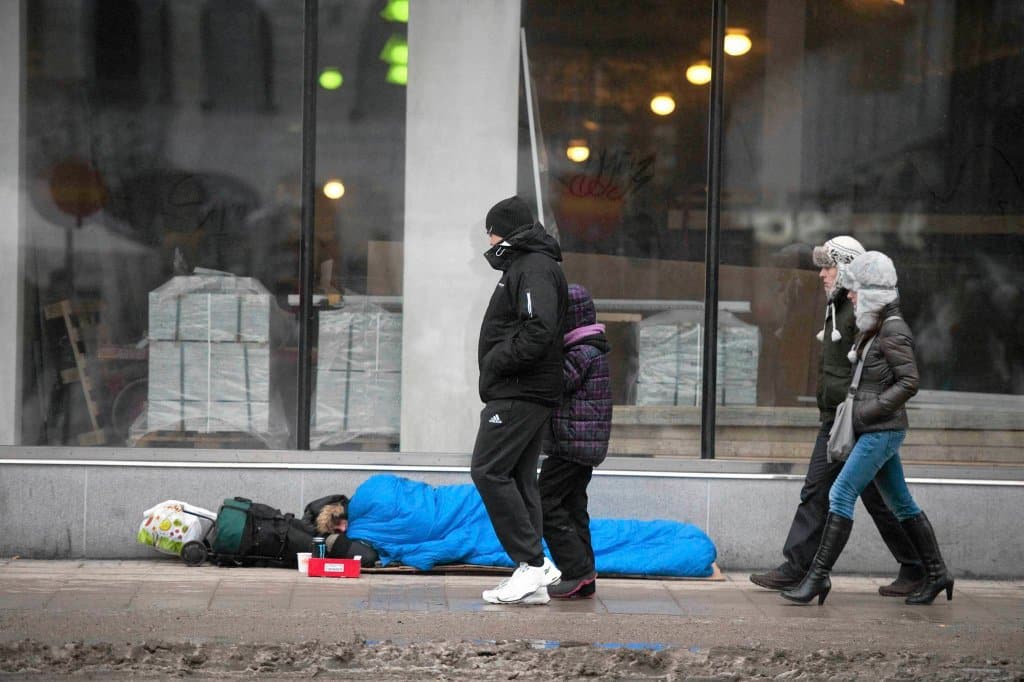 A homeless man sleeps on the street in Stockholm

As freezing temperatures grip the Swedish capital, dozens of downtown billboards have swapped commercial ad content for directions guiding the homeless to their nearest shelter.

Stockholm opens emergency shelters when temperatures fall below 7 degrees Celsius (44.6°F), but information about their location and the backup services on offer often fails to reach the homeless in time, said Clear Channel Sweden, an advertising agency that manages the 53 billboards.

“These are people who don’t necessarily follow the media or turn to local authorities for help … but they can’t miss billboards,” said Ola Klingenborg, a senior executive at Clear Channel International.

Instead of alluring ads promoting possible presents or festive food, the stark billboards simply point the way to the nearest place people can find “warmth and rest”.

Across Europe, many countries have seen the number of homeless people increase since the 2007 financial crisis amid austerity measures and rising housing prices, with an estimated 4.1 million homeless people in the European Union.

About 2,400 people in Stockholm are homeless, according to official statistics, although activists put the number above 4,000 and rising.

“If you were already poor, Stockholm has become a tougher city to live in,” he said in a phone interview from Stockholm. “More and more people are living on the edge.”

Jan Jonsson, Stockholm’s vice mayor for social affairs, said the billboards were a “great complement” to existing initiatives like churches opening their doors to the homeless, and could help “very exposed” people find shelter.

The billboards – which will run throughout the winter – are also used to encourage the public to donate useful items such as blankets and food or to volunteer for homeless charities.

If successful, the initiative could be replicated elsewhere in the country, said Klingenborg. “We already have other Swedish cities telling us they want to use this,” he added.

Rich societies have come under fire for policies that aim to drive the urban homeless out of sight – be it calls to remove rough sleepers ahead of Britain’s royal wedding or “hostile architecture” spikes to discourage loitering in doorways.

Brussels hands out portable cardboard tents and Paris has converted its city hall into a shelter for homeless women.

Afghans, diplomats surprised by Trump plan to pull out troops