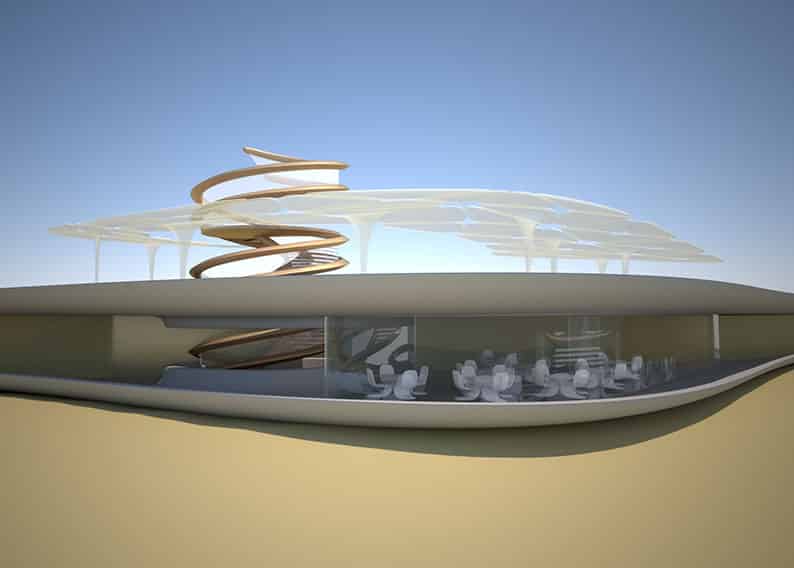 A YOUNG, talented Paphos-based architect has won the closed competition to revamp the facilities at the popular municipality beach known locally as ‘Sodap’ and work will get underway at the site at the end of next year.

Konstantinos Psomas, 33, of Psomas Studio of Architecture told the Mail that he signed the relevant contracts with the mayor of Paphos, Phedonas Phedonos, at the town hall around three weeks ago.

“A number of architects of Paphos were invited to submit their designs for Vryssoudia beach, known by everyone as Sodap beach, and we only had about three weeks to create our design after receiving the general brief for the project,” Psomas said.

The project will cost half a million euros and will completely change the face of the area which is currently home to a small nondescript cafe. It will be replaced with a stunning, cutting edge, sculpture- like, modern restaurant cafe- bar, complete with a viewing platform and a roof garden offering stunning views.

“This building will be a landmark for the area and uses fluid architecture, parametric design and also reflects and connects with the history of Paphos, such as the mosaics,” he said.

Psomas said that this is apparent in the rooftop canopy which is made up of different pieces of a special lightweight fabric that mirror the UNESCO protected mosaics of Kato Paphos.

“The fabric is stretched across structure to form a canopy that will self-illuminate at night.”

He explained that this would be achieved by hidden light sources, but that colours have yet to be decided upon.

The concept motivating the design is to create an ‘extension’ of the coastal walkway, adapting to the line and also the topography of the beach.

“The building is a sculpture landmark and is making the most of the fantastic 180-degree view which takes in the castle and harbour in the distance, and the sea,” he said.

An eye-catching metal staircase resembles a work of art, and that’s the idea, he said, adding that it leads down to the beach and up to a small viewing platform at the top, to maximize the magnificent view.

The design also includes an interior of around 130m2, an exterior space with a verandah which is almost at beach level, as well as the roof garden, which is around the same level as the coastal walkway. The exterior space totals around 188 m2.

He added that the design was still a concept at the moment, and that it will most probably evolve as the process and project moves along.

The company now has three months to hone the winning design and develop it further. The multiplicity will then call a tender for the construction company to create the building, and a further eight to ten months will then be required to construct the building, Psomas said.

He expects construction, which will take place during the winter months, to get underway at the end of 2019.

“Projects such as these mean a lot to me. I was away from Paphos for 12 years, collecting experience and knowledge and now my hometown and the municipality have given me the chance to share these wonderful and interesting experiences.”

Psomas describes himself as a‘re-generator’ and returned to Paphos a couple of years ago to reinvigorate his father’s architectural business – Psomas studio of Architects (PS-A) which has been operating for almost 30 years.

The young visionary studied architecture at the Aristotle University of Thessaloniki in Greece and the Ecole Nationale Superieure Paris-Malaquais in France.

He then moved to London to study at the Architectural Association School of Architecture and the world-renowned Design Research Laboratory.

“We are working on many projects of all sizes and scales, including, hotels, hotel renovation, high rise buildings, developments and clinics all over Cyprus. I also redesigned our office to modernise it a little,” he said.

Paphos teens end up in hospital after joy ride