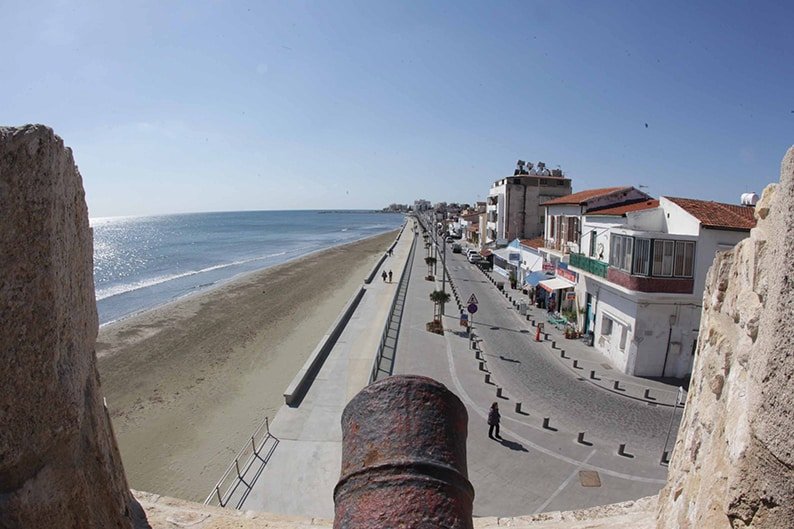 A Larnaca residential development at odds with a noisy ramshackle past

WITH urban development and expansion of cities come large-scale reconfigurations of the urban landscape as all potentially profitable land is scoured and apartments are raised, urban infrastructure installed, and economic activity is reorganised.

But when urban development is brought about arbitrarily and uncoordinated, without cohesive strategy, as in many cases in Cyprus, the city’s past will inevitably clash with present development endeavours, as industrial and urban dwellings compete for space.

This is the case with the areas lining Larnaca’s seafront, and especially the streets that run parallel to the shiny new coastal road at Piale Pasa, which consist mostly of Turkish Cypriot ‘hali’ (uncultivatable) land.

The majority of the land that runs along and branches off the Umm Haram and Touzhane streets was allocated after the 1974 invasion as a crafts industry area for refugees, and was then also offered along with financial and other incentives to non-displaced craftsmen who worked at home, disturbing residential areas, to move their workshops to these areas, of which there are now three in Larnaca.

It is in this area, just 300 metres inland from the seafront between Larnaca’s tourist hotspots, the Phinikoudes and Mackenzie beaches, that Jimmy Christofi and Mahboubh Parcham paid large sums to acquire an apartment in one of the many buildings that have been raised as part of the city’s development, which has stretched further and further into areas originally designated for other uses and to serve a different population group.

The result, is an area Christofi and Parcham call “uninhabitable”: a coastal area consisting of disorganised and unstructured mixed zones of both residential homes going for high prices, alongside especially loud and unattractive industrial workshops.

“No one wants to live here,” Christofi said, who has been trying to sell his penthouse apartment, bought five years ago for €300,000, for the last two years to no avail.

“I mean, look at this view, and you can’t imagine the noise and the smell,” he said, looking over his balcony to the opposite fields which host a scrap yard with towers of junk and a car garage next to it.

The road in front of the apartment building has been closed off for over two years for sewerage works, with a sign apologising for the inconvenience. An above ground septic tank, needed to accommodate the increasing waste in the area which has reached total capacity, is fenced off but still visible, and feeds waste which flows above ground onto a bank and into the exposed sewerage tunnel that the eye can follow for kilometres.

While both residents say they are aware that Cyprus doesn’t have a track record for speedy completion of public works, and that the industrial workshops and scrap yard are remnants from a bygone period and which have yet to be moved to established (crafts) industrial areas, they say that the ever-expanding illegal metal welding shack in the adjacent residential plot was the straw that broke the camel’s back.

“I’ve complained everywhere I can think of, but I’ve been sent from one place to another,” Christofi said. “I’ve even reported the situation to the office of the commissioner for administration and the protection of human rights (ombudsman), who said they’ll be investigating the matter and getting back to me.”

You could feel the fumes coming out of the metal welding shack itching your nostrils and hear noise rising up, which was soon joined by other layers of sound coming from the scrapyard trucks, the car-garage tools, and the woodcutting workshop next to the metal welders.

“I paid to have triple glazed windows put in, but not everyone can afford that, and they don’t even do the job since it seems that nothing can keep this noise out,” Parcham, who has been a resident of the area for the past 11 years, said.

There’s no such thing as a calm, quiet day at home, she continued, as work starts early in the morning and finishes late at night, “even on Sundays.”

The workers of the metal-welding shack, where mobile home units are manufactured according to a sign outside the entrance, said they were only asked to close the shop once some months ago by the police, with no follow-up since then.

“We’re just trying to do a day’s work,” they said, “and shacks like ours have been in the area long before people started building and buying luxury apartments.”

The Larnaca municipality could not be reached for comment, and despite Parcham’s insistence that nothing is being done because the craftsmen “have friends in high places”, it may be that the municipality is not as interested in clearing up backstreets, no matter how close they are to tourist centres, when their main roads display similar images of worn-down shacks built after the war, and which are only now beginning to be addressed by the mayor.

Indifference of the authorities may be another factor, as Christofi recalled that when officers came to the scene in response to his call, “they told me there’s nothing they can do, so I told them about a European law that states that you can’t make more than 50 decibels of noise in a residential area, and he replied that this is an EU law, not a Cypriot law, and I just stared at him.”

This clash between the old and new, according to municipal secretary Andreas Louka, “is an inevitable consequence of development.”

The area is cleaned up once a year, he said, admitting that this may not be enough now that the area has become increasingly residential.

The Turkish Cypriot property management department should have been more careful in granting licences arbitrarily for the raising of apartment buildings in a crafts industry area, to house non-displaced persons who are not considered beneficiaries of Turkish Cypriot land, Louka said, adding that complaining residents should have first checked where they were buying apartments.

The bottom line, according to Louka, is that “development has created these issues for itself, and while there may be areas where these industries could move to, everything is a matter of money, and so for the time being there’s no plan to move them.”

Our View: And we wonder why educational standards are declining