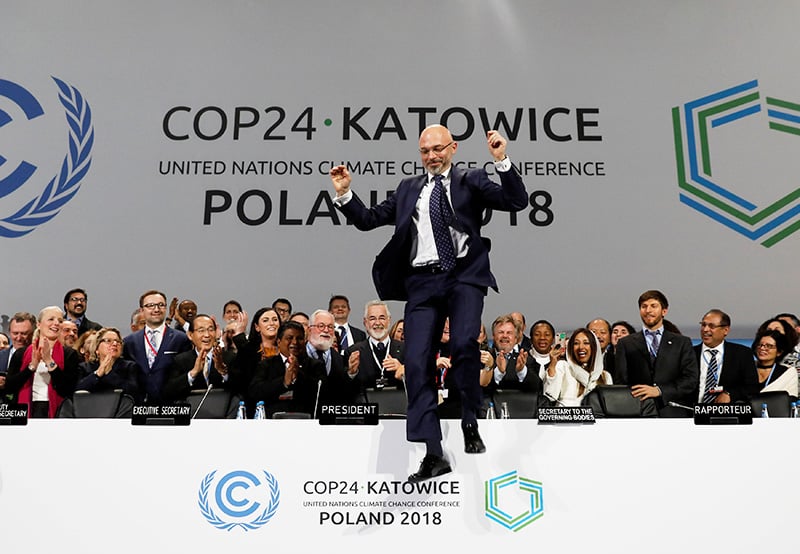 Global warming is physics and chemistry, and you can’t negotiate with science for more time to solve the problem: more emissions mean a hotter planet. Dealing with the problem, however, requires an international negotiation involving almost 200 countries. In big gatherings of that sort, the convoy always moves at the speed of the slowest ships.

That’s why the reporting on the UN Climate Change Conference in Poland that ended last weekend, two days later than planned, has been so downbeat. It didn’t produce bold new commitments to cut greenhouse gas emissions. It saw the usual attempts by the biggest fossil fuel producers, the United States, Russia and Saudi Arabia, to stall the process. And in the end it just produced a ‘rulebook’.

But that’s all it was supposed to do, and it’s not ‘just’ a rulebook. The great breakthrough at the Paris conference in Paris three years ago saw every country finally agree to adopt a plan for emission reductions, but the Paris accord was a mere sketch, only 27 pages long.

Fleshing it out – what the plans should cover, how often they should be updated, how countries should measure and report their emissions, how much leeway should be given to poor countries with bad data – was left until later. Later is now, and in the end they did come up with a 256-page rulebook that fills in most of those blanks.

“We have a system of transparency, we have a system of reporting, we have rules to measure our emissions, we have a system to measure the impacts of our policies compared to what science recommends,” said the European Union’s Climate Commissioner Miguel Arias Canete. It was an excruciating process, and it still leaves a few things out, but it settled a thousand details about how the Paris deal will really work.

Oh, and one big thing. China abandoned its claim that as a ‘developing country’ it should not be bound by the same rules as rich countries like the United States. There will only be one set of rules for both rich and poor countries, although the really poor ones will get a lot of financial and technical help in meeting their commitments.

This year’s conference dealt with the details at ministerial level. Next year UN Secretary-General Antonio Guterres will host a summit of the biggest emitters to lay the groundwork for the key 2020 meeting. That’s when countries will report if they have kept their 2015 promises on emissions cuts, and hopefully promise much bigger cuts for the next five years.

The rise of populist nationalists like Donald Trump and Brazil’s Jair Bolsonaro, both climate change deniers, will make future negotiations even harder. It’s all moving far too slowly, but the human factor keeps getting in the way. For example, Bolsonaro wants Brazil to get extra carbon credits for protecting the Amazonian rainforest, even as he plans to carve the forest up with big new roads and cut a lot of it down.

The Paris deal is important, but it has come far too late to stop the average global temperature from rising to the never-exceed target of +2 degrees Celsius that was adopted many years ago, let alone the lower target of +1.5C that scientists now believe is necessary.

We are already at +1C, and current promises of emission cuts will take us up past +3C. At the moment emissions are still going up (by three per cent this year). Even if countries make further major commitments to cut emissions in 2020, it’s hard to believe that we can avoid devastating heat waves, droughts, floods and sea-level rise, and a sharp fall in global food production.

So while we are cutting emissions, we also need to be working on ways to remove some of the carbon dioxide and other greenhouse gases we have already put into the atmosphere. Various ideas for doing that are being worked on, but they will probably become available on a large scale too late to keep the temperature rise below +2C.

So geo-engineering – direct intervention in the atmosphere to hold the temperature down while we work on getting emissions down – will probably be needed as well. Nobody really wants to do ‘solar radiation management’, but cutting the amount of sunlight reaching the planet’s surface by just a small amount is technically feasible. It could temporarily halt the warming and give us the extra time we are probably going to need.

We are getting into very deep water here, but we may have no other options. If we had started cutting our emissions 20 years ago (when we already knew where they would eventually take us), such drastic measures would not be necessary. But that’s not the human way, and so we’ll have to take the risks or pay the price.

Nine workers die in fire at Uralkali mine in Russia