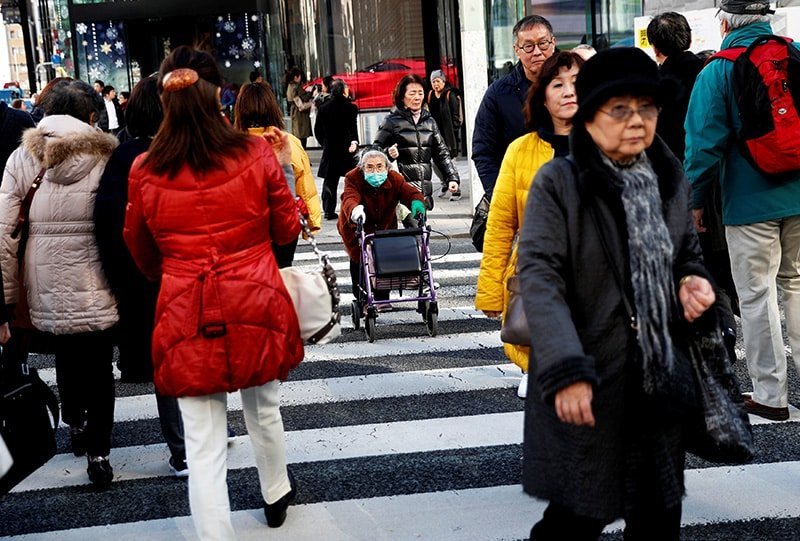 A woman uses a walking aid as she crosses the street at a crosswalk in Tokyo, Japan, December 14, 2018. REUTERS/Kim Kyung-Hoon

Distressed by Cyprus rolling down the road of partition, I decided to disappear for a short while, as far away as possible, in the hope that I would thus forget the misery of my home country. Unfortunately, my goal proved unattainable as a result of having daily at my disposal the electronic versions of both the Cyprus Mail and Alithia and by extension a full and comprehensive account of what has been happening in Cyprus. Nonetheless, my stay in the Land of the Rising Sun for a period of ten days was an experience that I am seeking to summarise below.

Japan has its own unique culture. The dominant element of this culture is the harmony which persists between absolute order and apparent total chaos. Most Japanese do not speak any foreign language and, thus, communicating with them is not easy. Nonetheless, these people are extremely helpful and polite and would often go out of their way to help a foreign visitor seeking help. What is truly impressive is the precision with which the system functions. For example, if the scheduled departure or arrival time of a train is 10:22, the corresponding actual time will be 10:22: neither 10:21 nor 10:23.

In a conversation, almost without exception, the Japanese would repeat three times the information or the instructions given to them, to be absolutely certain there is no room for a misunderstanding. This is how they secure absolute consistency. The other characteristic features of the Japanese culture are hard work, compliance with the rules of the game and cleanliness.

Nobody expresses an assessment, opinion or a position if he or she has not previously studied the issue in depth and has satisfied himself/herself as to the correctness of the conclusion reached.

However, what is their true distinguishing feature is the soberness with which their political system functions and with which they confront their national problems, with pride but without arrogance, despite their prominent position in the world rankings.

I read in the English language daily Japan Times that Japan continues to be in a confrontation with Russia, the latter refusing to return four islands that had been looted in the course of World War II. In a radio interview last Monday, Sergey Lavrof, the Russian foreign minister, did not mince his words. He stated that “the acceptance of the legality of the effective Russian control of the 4 islands off the Hokkaido coast is a basic precondition for reaching a Peace Agreement”.

Japan perceives the existence of political and military threats on the part of Russia as well as on the part of China. For these precise reasons, it welcomes the presence of American bases on Japanese soil. One of these bases is currently being relocated on land that is reclaimed from the sea.

The presence of the American bases combined with Japan’s own military expenditure, amounting to 27 trillion yen (over €200 billion) in the next five years, approved this week by the Japanese Council of Ministers, is indicative of what is necessary for confronting these threats.

And now comes the comparing and contrasting with our situation:

Cyprus is a small island at the centre of a cyclone. In Japan, I asked around 50 people in all walks of life about Cyprus. With the exception of two or three, the rest did not know Cyprus or had a very vague understanding of the fact that it was an island in the Mediterranean. A few said that Cyprus is a Greek god or goddess. The only comforting thing was that the name of Cyprus (Kypros) is, in fact, pronounced as Kypros and is written using 4 characters of the Japanese alphabet. Our belief that with peanuts (net of the applicable bribes) we will be able to militarily confront countries such as Turkey discloses the magnitude of our political naivety and ignorance.

In contrast to the Japanese, we are omniscient, we swiftly come to a conclusion on whatever issue preoccupies our mind and we have a strongly-held opinion on almost any matter that we come across. If something misfires, it is always somebody else’s fault (who failed to adequately explain what was the target of the exercise or who is seeking to serve his interests, as opposed to serving our interests).

I suspect that these are the attributes that the Secretary General of the United Nations had in mind when he wished us “good luck”.

Xmas toil: at least the food was good