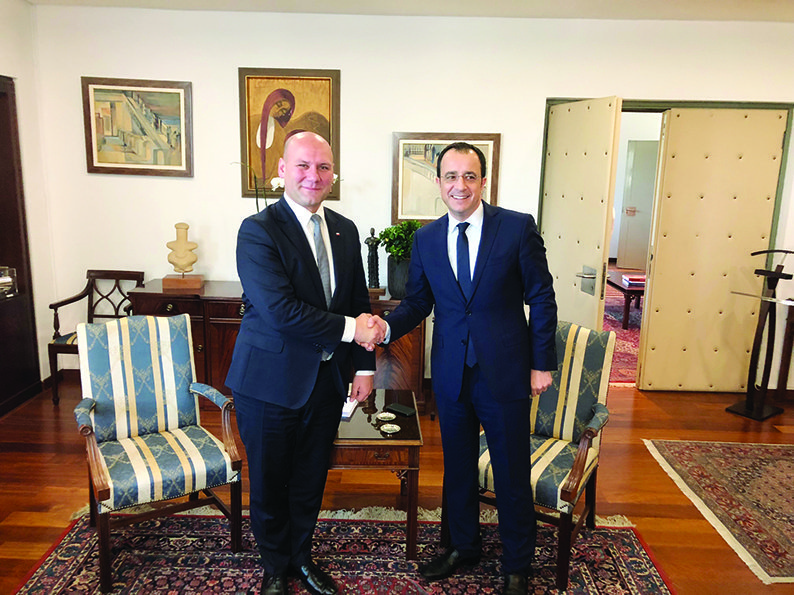 Cyprus and Poland have a very similar take on the meaning of the concept and principle of sovereignty, its deputy foreign minister says

POLAND and Cyprus may not have adjoining borders but, as members of the European Union and therefore political and economic partners, the two countries do have shared and common interests which merit ongoing discussion and regular exchanges, Poland’s deputy foreign minister Szymon Szynkowski vel Sęk made clear during his recent official visit to the island.

“We both joined the European Union in 2004 so we have the same experience regarding the accession process and of what unfolded subsequently in the course of our membership to date. Indeed, it is this shared history that has brought us closer together, even though we belong to different geographical regions whose interests sometimes diverge, which makes it all the more important to strengthen and cultivate the common links we enjoy,” Minister Szynkowski vel Sęk told the Sunday Mail during an interview that took place at the Polish Embassy office in the centre of Nicosia.

In his view, one issue that binds the two nations closer together is rooted in their very similar take on the meaning of the concept and principle of sovereignty.

“We [Poland] are deeply attached to and always try to stress in our dealings within the EU that the principles of international law that precede and are older than the Union itself should be the basis for all interactions involving member states in terms of their mutual relations. These principles cannot be bent as they are the pillars on which the functioning of international politics is based. Cyprus, an island that experienced a tragic division of its territory, makes a similar point when it comes to its dealings within the EU,” Szynkowski vel Sęk noted.

The minister took pains to point out that in this instance the principle of sovereignty refers not only to the international politics of the two states but also to their right to take autonomous decisions when dealing with various specific internal matters. By way of example, he cited the issue of reform of the judiciary system.

The Polish minister cited “extremely useful” discussions he had held in the course of his visit with Demetris Syllouris, the RoC Speaker of the House, about the importance of an independent judicial system.

On the issue of trade, he noted that Poland currently exports goods worth approximately 150 million euros to Cyprus while Cypriot exports to Poland now total more than 80 million euros. This, according to the minister, clearly indicated that there was room for growth and that economic links between Warsaw and Nicosia should intensify and strengthen. Acknowledging the growth of Cyprus’s business dealings with Poland’s shipbuilding sector, the minister suggested Cypriot entrepreneurs might benefit further by looking to familiarise themselves with other facets of the expanding Polish economy. In particular, he suggested, they might wish to look at the pharmaceuticals sector or at innovations in the Polish aviation industry which offers a range of technologically advanced aviation equipment including drones. Moreover, he said, Poland is a leader in the field of start-ups development and is ready and eager to share its experiences and to exchange views in this field.

Szynkowski vel Sęk, who during his visit also met with Cyprus Foreign Minister Nicos Christodoulides and Permanent Secretary Minas Hadjimichael, allowed that their different geographical locations meant that when it came to the sphere of international relations there were times when the two countries’ interests and priorities differed. This mirrored the reality of international politics, he said, and where such differences arise, acknowledging and discussing them frankly is the best way to move forward and create a mutual understanding while strengthening bilateral relations.

“The Eastern Partnership [an EU initiative governing its relationship with the post-Soviet states of Armenia, Azerbaijan, Belarus, Georgia, Moldova, and Ukraine], for example, is something important for us, and not crucial for Cyprus,” Minister Szynkowski vel Sęk pointed out by way of an example. “The same applied with regards to Russia whose aggressive policy is a very big challenge to Poland but with whom Cyprus has friendly relations.”

In keeping with this view, when asked to comment on Moscow’s involvement in the Eastern Mediterranean region, the minister was sceptical. “Russia is involved in many regions. We have extreme cases of such involvement in places such as Abkhazia, South Ossetia, eastern Ukraine and the Crimea. So, unfortunately, I don’t believe that such a presence usually leads to stability.”

To add emphasis to his remarks about the fractious relationship with Moscow, the minister pointed to the ongoing debate about the presence of Nato rapid reaction forces in Poland as well as the establishment of a permanent US army base on the Polish territory as finite examples of Warsaw’s tough response “to Russian actions aimed at showing that we are not going to stay idle while Moscow flexes its muscles”.

He spoke of Warsaw’s unresolved issues in Poland’s relations with Russia and specifically about Moscow’s handling of the controversial air crash at Smolensk Severny Aerodrome on April 10, 2010, when all 96 on board, including Polish President Lech Kaczyński died. The President and a delegation of senior Polish government and military officials were en route to a ceremony marking the 70th anniversary of the Katyn Massacre in Smolensk.

Warsaw has been seeking the return to Poland of the wreckage as is its right in keeping with the Chicago Convention, which requires the state where an incident or crash occurs to return the wreckage and other potential evidence to the aircraft’s state of registration once the technical air safety investigation is completed. That investigation was completed in January 2011.

In October, the Parliamentary Assembly of the Council of Europe (Pace) called on Russia to hand over the wreckage without further delay, and to do so in a manner that “avoids any further deterioration” of potential evidence. Pace also issued a statement claiming: “The continuing refusal of the Russian authorities to return the wreckage and other evidence constitutes an abuse of rights and has fuelled speculation on the Polish side that Russia has something to hide.”

Poland, Szynkowski vel Sęk told the Sunday Mail, greatly appreciated Pace’s support. Warsaw was determined to continue its efforts to enlist the assistance of other states in order to maintain pressure on Russia to comply. “It is in our interest to get this wreckage back in order to make progress in our own investigation into the crash and we will not give up on this matter,” he said.

Turning to another topic, the minister explained Warsaw’s stance on the migrant crisis. Along with Hungary, Slovakia and the Czech Republic, Poland is opposed to the mass influx of migrants into the European Union and has refused to take in any under the 2015 deal designed to allocate 160,000 people among EU member countries in an effort to alleviate the burden on Greece and Italy.

“We have always made it clear that we believe each country should choose its own path as to how it will contribute to the migrant crisis. Our position is that we should concentrate on helping more in the regions of conflict and/or in the neighbouring countries. We simply cannot afford to bring all the people to Europe. Nor should we allow the drainage of all human skills from these regions when those skills will be key to the rebuilding effort once stability is restored. This is why Poland now spends four or five times more on development and humanitarian aid than it did before 2015. We build hospitals, we participate in the construction of schools. We believe that one euro or a dollar spent in the region is a much better spend than the same amount spent on a refugee in Europe.”

Poland, currently a non-permanent member of the UN Security Council, firmly supports all peaceful initiatives aimed at unifying Cyprus including the presence of the UN Peacekeeping Mission on the island.

“We also support all confidence building initiatives between the two communities — the proverbial small steps that should lead eventually to Cyprus to unification,” the Minister noted.

Warsaw is following the ongoing gas explorations in the Eastern Mediterranean with great interest. Once the potential of the large deposits indicated by research start being exploited, “the EastMed pipeline from Israel through Cyprus and Greece to Italy will be crucial.”

According to the minister, the Polish Petroleum and Gas Mining Co (PGNiG)) has been monitoring the progress of East Mediterranean gas exploration from the outset. Now, it is looking at the possibilities of including the EastMed pipeline in The Three Seas Initiative, a forum consisting of 12 EU states located in Central and Eastern Europe. The Initiative aims to promote co-operation in economic matters, particularly in the field of energy as well as transport and communications infrastructure.

“Cyprus has been one of the top ten most favourite tourist destinations for the people of Poland for years. When I return home, I will be more than happy to encourage my friends to visit the island. Of course, I would also like to invite Cypriots to come to Poland where they will always find a warm welcome.”

The minister noted that Cyprus had played a part in the recent worldwide celebrations of the 100th anniversary of Poland’s independence on November 11th. The Polish independence anniversary was memorably and visibly saluted at famous monuments and sites around the world, among them the Pyramids in Giza, the statue of Christ high above Rio de Janeiro, and the Leaning Tower of Pisa. Buildings and monuments were lit up with the Polish colours to mark the day. Nicosia’s municipal building was one shining example, aglow with “our national colours of white and red.”

“Here on the island, members of the Polish community gathered together at the embassy and, like similar gatherings in Polish embassies elsewhere, sang the national anthem knowing that thousands of other Poles were doing the same thing at exactly the same hour worldwide,”