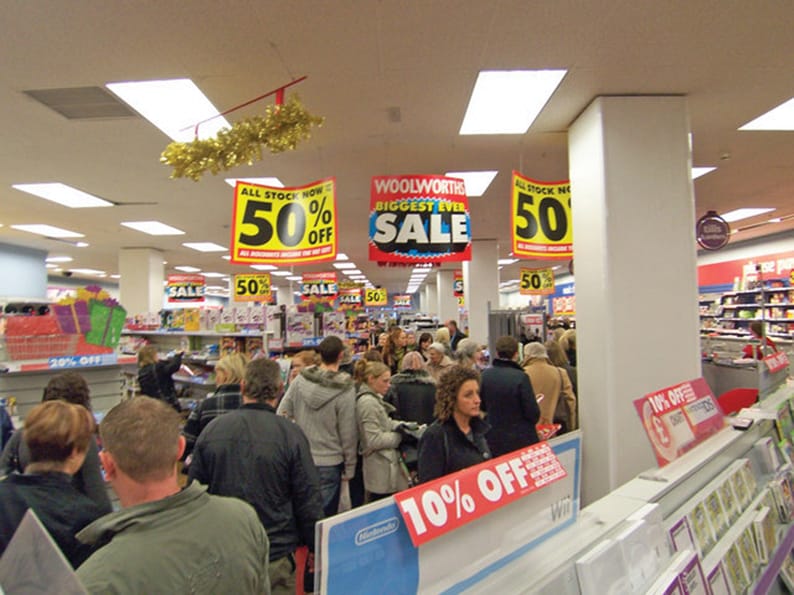 WOOLWORTHS, the British High St retail staple for decades, should never have been the first port of call for buying Christmas presents. Yet it often was, and nowhere more so than in the small, poor market town in Lincolnshire where I lived as a teenager.

Like thousands of British teenage girls down the decades  — until the shops closed their doors in January 2009 after 100 years in the UK — I cut my working teeth on a Saturday and Christmas job in Woolworths.

Woolies was basic: famous for its pic’n’mix sweets and selling other ‘bits and bobs’ — crockery and kitchenware, a limited range of clothes, toys, haberdashery, tacky stationary and some food. Its record section — LPs and 45s in the late 70s when I worked there — though was often surprisingly good, and a major money earner.

In my town, shops were limited. Though a small branch, Woolies’ only competition was a Co-op across the street, mainly a foodstore but with Woolies-type products upstairs, and a twice weekly outdoor market selling cheap clothes, awful cosmetics and fruit and veg. Tragic.

Decent Christmas shopping meant an expensive, tiring trek by the infrequent bus and train service, or car if you had one, to bigger towns miles away.

So, limited and small though it was, Woolies was big in my town. The days before Christmas were chaotic, the queues in front of my till overwhelming.

And the buying choices were often all too desperate.

I remember a grandmother handing over a pink skirt she was buying for her granddaughter. The size was 7-8 years old.

“She’s only six and small for her age, but you’ve sold out of her size,’’ she told me.

I knew that only too well as I had put the only three skirts in stock in the size she wanted out on the rack days before. They quickly disappeared.

“She’ll grow into it though,” I tried to reassure her.

“But she won’t like it on Christmas Day,” the grandmother replied.

She was right. Her granddaughter wouldn’t.

But nothing compared to Andy, an irrepressible, puppyish sort of boy who went to my school.

He sauntered in one Christmas Eve just ten minutes before closing. The crowds had thinned, many shelves were nearly empty.

He came up to me and said he was looking for a present for his mother.

“From Woolies?” I squeaked. “Haven’t you got her anything yet?”

“Nah,” he responded, trying and failing to look shame-faced.

We both glanced around the shelves, looking for inspiration. I suggested a record but our selection was too Top 20 for his mum. A sweater? He didn’t know her size. A scarf? She had loads. Crockery? He could only afford a few pieces and it would look naff. A saucepan? “She would kill me.”

Then he noticed the gift card rack besides my till with a few stray cards attached.

I followed his eyes.

“Well then she can choose what she wants.”

Who gets anything they WANT from Woolies apart from shoelaces and sweets I wanted to ask, but the shop was about to close and time had run out.

All the Christmas-themed gift cards were long gone but a few birthday ones were left.

Andy thought that might be a good idea. “After all it is Jesus’ birthday tomorrow,” he suggested.

The boy’s an idiot, I thought. What’s Jesus going to do with a gift card from Woolies?

Then his eyes alighted on a card with a baby on the front.

“That’s the one. I’ll give her that and she’ll remember what a cute baby I was.”

I very much doubted that ‘cute’ and ‘Andy’ were going to appear in the same sentence when his mum opened her gift the next morning, but I had lost the will to argue.

His budget was two pounds (about 9.60 pounds today or 10.60 euros) so he handed over the cash and bounced out of the store with a two-pound Woolies gift voucher for his mother.

I envied neither Andy nor his mum the next morning.