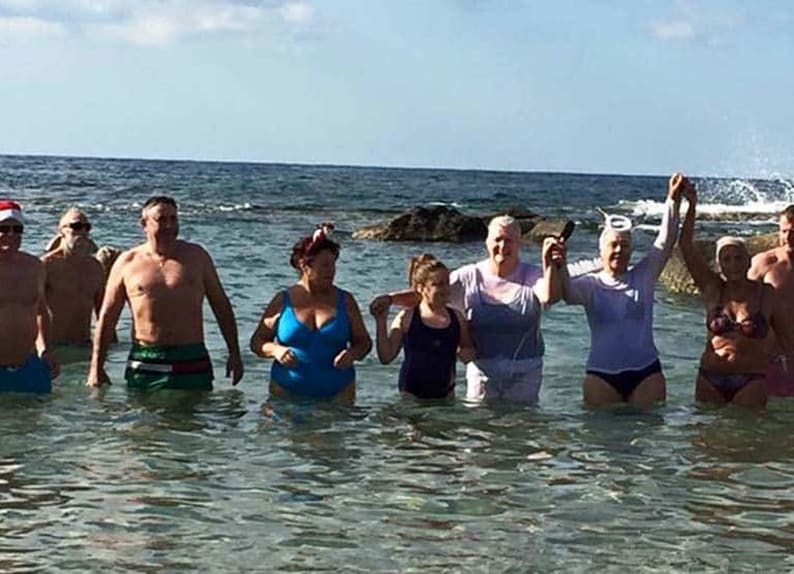 DOZENS of fundraisers in Paphos will enter the water on Boxing Day, whatever the weather, to raise funds for their chosen charities.

The annual event has become a firm fixture on the local festive calendar and the 11th Boxing Day swim will see participants enter the water at Vardas Beach in Kissonerga at 11am on December 26.

They will have to stay immersed in the water for 15 minutes. No wetsuits are permitted, although swimmers may wear t-shirts and leggings over their swimsuits while some will wear fancy dress,

Many of the participants are retirees and pensioners and all are raising money for various Paphos-based charities.

John Tremain, 70, will be taking part in the swim for the first time and said he may wear special attire relating to animal welfare. He is raising funds for Animal Rescue Cyprus (previously Paphiakos and CCP animal welfare.)

“My wife Melanie and I have been involved with animal welfare for many years and as this is a special year for me as I’m 70, I wanted to do something to mark the occasion,” he told the Sunday Mail.

Animal Rescue Cyprus was founded in 1982. It provides numerous services including, veterinary clinics in Paphos and Polis, a tea shop, charity shops, a rescue line and a re-homing service. The shelter is home to numerous donkeys, horses, dogs, cats, rabbits and goats.

Tremain will be accompanied on the swim by a trainee vet from Slovenia and his wife will be waiting on the beach with a hot coffee, he said.

“People can come and sponsor me there as well, as we will have the forms with us and it would be great to have support from the public,” he said.

The couple retired to Paphos eight years ago, and Tremain is the coordinator of Erasmus funding from the EU which is used to support newly qualified or trainee vets to visit Animal Rescue Cyprus for around four months at a time.

“They gain invaluable experience and we make strong and excellent relationships in Europe,” he said.

Last year, €2,500 was raised for the charity by supporters taking part in the swim, said Animal Rescue’s Oana Bodnaras.

She said that the facility costs around half a million euros a year to run.

Another swimmer, Tam Todrick, aged 63, from Tala in Paphos is raising funds for SSAFA- the armed force charity.

He is a member of the UKCA club in Paphos which has a number of members taking part.

“I am ex-Navy and as a large number of the UKCA members are ex-forces. I wanted to do something to help,” he said.

He added that as well as raising sponsorship money the event is also great fun.

“We have a laugh and it’s a great experience,” he said.

Todrick also participated in the charity swim last year and said that he has an affinity with the water.

“I used to sail and I was still swimming in October.”

Other members of the UKCA club will also be swimming and club chairman Debbie Bell said that it will be an open house on Boxing Day.

Traditionally, swimmers and members of the public go to the club after the swim, from around 11.30am onwards, to eat, relax and be entertained.

“Non-members are also welcome and entrance is free. We are giving out free soup to all of the swimmers and there will be a special Boxing Day lunch which is open to everyone,” she said.

Homemade dishes such as lasagne, chilli, curry and fish and chips will be priced at a reasonable €5.50.

At 2pm, live entertainment will be provided by ‘The Fender Benders,’ and the venue gets very busy, only closing when the last guest leaves.

Why Israel creates more startups than others