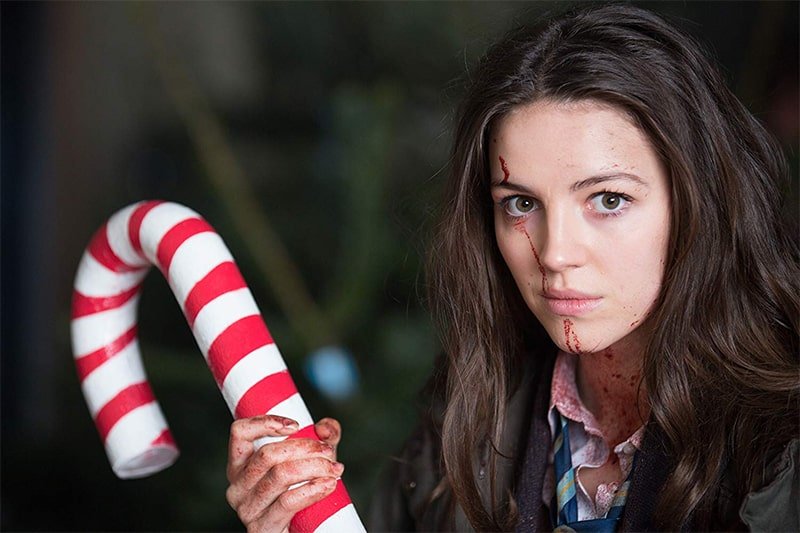 Let’s face it, you already know if you’re part of the audience for a zombie horror musical comedy or not. Anna and the Apocalypse is Dawn of the Dead – or, more accurately, Shaun of the Dead – meets High School Musical, a film about British teens trying to survive in a world overrun with flesh-eating zombies. The splatter is real, fully justifying the ‘18’ rating. Heads (albeit zombie heads) are ripped off, crushed like ripe fruit, impaled on knives and other sharp objects. In between, pop songs are sung, in the style of the Disney musical. It’s hard to say which is the more terrifying.

The horror musical isn’t much of a genre; I can think of The Little Shop of Horrors, and that’s about it. (There was also a musical stage version of Carrie, which famously flopped in the 80s.) Audrey the carnivorous plant in Little Shop sang, of course – remember ‘Mean Green Mother from Outer Space’? – but the zombies here don’t, which is too bad. Nor are the singing and zombie-killing juxtaposed all that much; characters don’t sing when they’ve been bitten and waiting to die, for instance, which happens quite often. (Like Veronica’s in Heathers, their teen-angst bullshit comes with a body count.) The songs are a little front-loaded, getting sparser as the action takes over. The whole musical angle threatens to look like a gimmick.

Why exactly is this a musical, anyway? For a while, the songs operate as a form of denial; the world’s going to hell, but the kids keep on singing. (Almost the first thing we hear is the radio warning of deadly infection – but Anna turns it off, too engrossed in her own problems.) In a scene recalling the 2004 version of Dawn of the Dead, Anna leaves her house in the morning to find her neighbourhood turned into a war zone overnight, the neighbours doing battle with zombies or turned into zombies themselves – but here, unlike in DotD, Anna doesn’t notice, being too busy singing a song called ‘New Morning’ (“I’m miles away / And it’s a beautiful day”). It’s a funny conceit – albeit not as funny as Shaun in Shaun of the Dead not noticing the zombies because his neighbours all look like zombies anyway – but inevitably grows irrelevant when Anna and Co. actually start doing battle with the undead. A better film might’ve made the songs more meaningful, not to mention found better songs.

Maybe; but the real reason why this is a musical is because ‘zombie musical’ is a catchy concept that’ll help a project get financed (see also Pride and Prejudice and Zombies, though actually don’t) – and the mash-up of genres works quite well, even if the project may have started out slightly differently. Anna and the Apocalypse has an unusual genesis: it’s based on a short called Zombie Musical by Ryan McHenry, who later became known for a series of viral videos called ‘Ryan Gosling Won’t Eat His Cereal’. (Celebrity comes in many forms nowadays.) McHenry died in 2015, aged 27 – and I haven’t seen his short but it seems clear that the plot, at some point, must’ve been specifically about misfit, bullied kids battling zombies (and, by extension, their more popular classmates), a distinction that gets a bit lost in the movie.

What to make, for instance, of Nick, Anna’s macho, sexist, obnoxious ex-boyfriend who loves killing zombies and gets a song that goes “I’m a soldier at war”? What to make of John, her sweet-natured, ostensible boyfriend who however (as an early song makes all but explicit) is clearly closeted? One expects that Nick will soon become zombie food, while John will come out as gay and become a hero – but that’s not what happens, maybe because the film already has one LGBT character and the money-men wanted something more mainstream. The result is a film that slightly loses its way emotionally, going to town with the blood and gore (The Walking Dead has a lot to answer for) but becoming more mechanical, falling back on spectacular ‘kills’ and cartoonish devices like a panto-villain headmaster.

There’s one more detail we haven’t mentioned – and that detail is Christmas, the reason why a British horror comedy with a no-name cast is opening here (and now) in the first place. Anna and the Apocalypse is festive on top of everything else, the zombie plague taking place at the most wonderful time of the year; our heroes wave garlands of tinsel to distract the undead, while Anna declares that “Christmas is fast becoming my least-favourite C-word”. It makes the film even cuter, and more of a mash-up – but also even more gimmicky, trying too hard to stand out. Anna is dark spiky fun but too contrived, too much of a concept; then again, why go on about it? You already know if you want to see this movie.