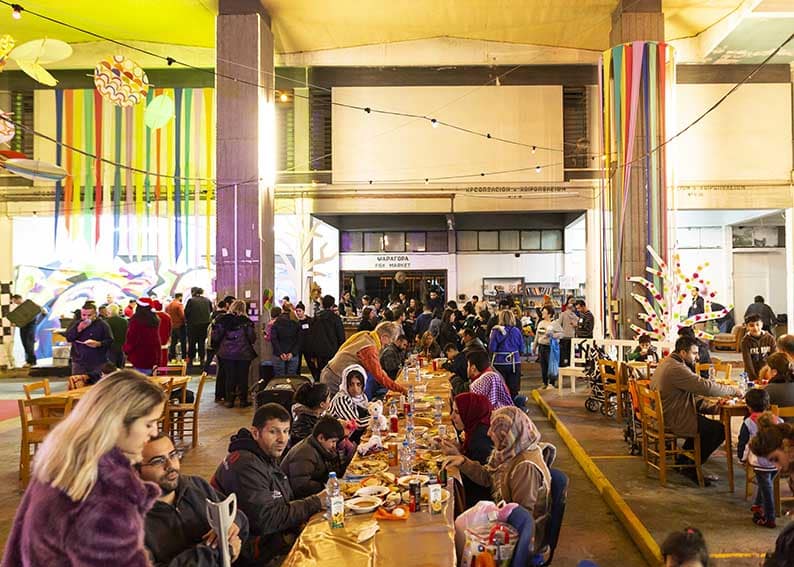 Volunteer mingle with the needy and homeless

AS DECORATIONS fill homes and streets, and as the majority of people indulge in lavish meals and shopping sprees, there are growing numbers in Cyprus with no home to decorate and no means to provide anything other than the basics.

In an effort to spread the Christmas spirit to those segments parts of the population that are often denied it, an abundance of volunteers and many private companies have been responding in recent years to help the less fortunate, especially after the 2013 financial crisis.

Recent figures have also shown a huge jump in the number of homeless people this year.

One event to contribute to at least one decent meal at Christmas was held just a couple of days ago was organised by Rosie Charalambous, who put out the call for help in arranging a Christmas dinner for those in need.

The Facebook event ‘Sharing is caring’ was created, which went viral in a matter of days, with numbers of posts by people declaring their willingness to bring food and to help with the setting up, handing out of food, and cleaning.

Some 100 refugees and homeless people, mostly families of four members or more, gathered at the Agora Project hosted in the old municipal market in old town Nicosia, where a buffet was set up, providing enough food to feed more than twice the number of the needy and the helpers combined.

“The reaction to the idea was brilliant, from both volunteers, most of which arrived with something to offer, as well as from companies who donated food and drink,” Charalambous said, highlighting the input of the UN, who brought tables, chairs and soups.

But while there was a “whirlwind” response from people willing to help, Charalambous said, “not very many homeless came, perhaps because they were embarrassed or shy, which is understandable.”

Even so, the large trays of left-over food will be given to the nuns behind the Catholic church who often provide food for the needy, and to someone who works directly with the homeless, Charalambous said, ensuring that even those who missed out are not left behind.

In the Agora, homeless and refugee children played football and took turns on the rocking horse decorated with fairy lights, screaming with laughter. Teenagers and adults sat on the long stretches of tables, eating and talking, as helpers bumped in every two minutes offering one desert or the other.

“This meal is more than we could have ever had the chance to eat at home – I mean, where me and my family are staying,” Mahir Hussein, 39, told his 8-year-old son in Arabic, who then spoke the words back in English, which he learnt in his short time in Lebanon.

Mahir, his wife, and two sons, of Palestinian origin, were forced to escape to Syria, then flee to Lebanon, then to Turkey, and finally to Cyprus three months ago where they were placed in a room in the Remi hotel paid by the government.

“We know Cypriot people are good,” Mahir said, “but not to refugees, not to the homeless.”

Ary Namiq Kakarash, 32, a policeman who came from Iraq to Cyprus two months ago with his wife and three children, who are also living in the Remi hotel, said the same. “People have good hearts here, but they show it only to those they want to, not to refugees.”

His family had received €285 euros two months after arriving in Cyprus, and living in the hotel determines their inability to cook, and their subsequent reliance on take-out which is significantly more expensive.

“Finding work when you don’t speak Greek is almost impossible,” Ary said, “and so is finding someone to help you in all the government services we are sent to.”

“We are sent to one place, then another, then back again, and so we are often not able to get the help the government says it has to offer to refugees,” he added.

This is also a matter of language, Ary said, since government workers in the departments that refugees rely most on, such as the social welfare services, very often do not speak English.

The lives of some have left them in more fortunate positions. Josef, 47, surrounded himself by Greek-speakers in Iraq, from which he fled five months ago to come to Cyprus since his atheism posed a danger to his life.

A perfect speaker of Greek, he acts as a translator for refugees who are not given the attention they should.

“It always seems like refugees are always asking for things, but the truth is that all we want is to be treated like humans, to be given things that every other human is entitled to and takes for granted,” he said.

A play along Queen’s Boulevard

At least the capital got its main square back for Christmas