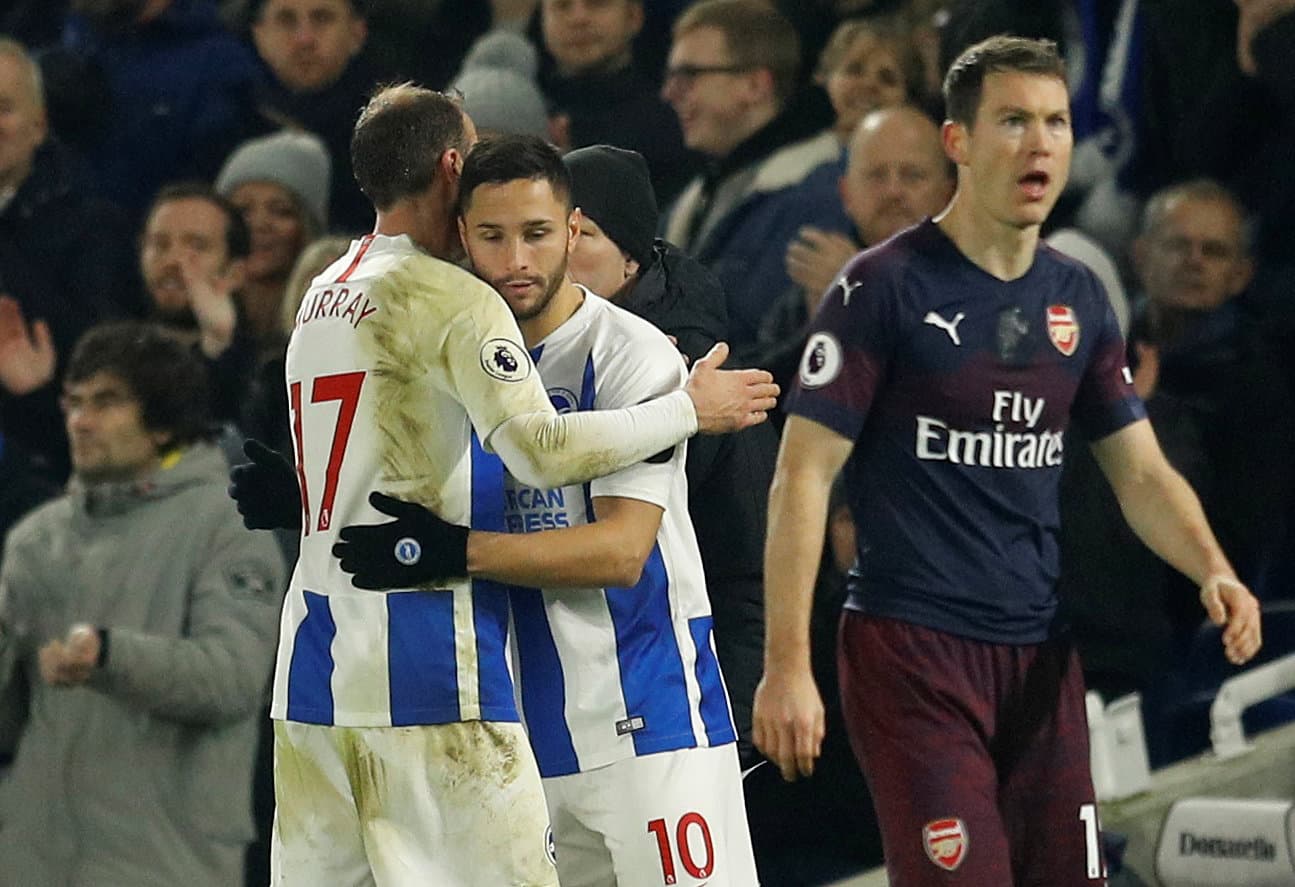 Dec 26 (Reuters) – Brighton & Hove Albion came from a goal down to draw 1-1 with Arsenal in the Premier League on Wednesday and arrest a run of three straight defeats.

Their poor run looked like continuing as Arsenal took the lead after seven minutes, Pierre-Emerick Aubameyang producing a fine side-foot finish wide in the box for his 13th league goal of the season.

However, the Gunners have only kept three clean sheets in 19 league games and were pegged back just after the half hour mark.

A long ball up the field came off the head of Stephan Lichtsteiner and fell to Jurgen Locadia who had sprinted up the pitch and did well to poke it past Arsenal goalkeeper Bernd Leno.

Brighton midfielder Davy Propper headed just wide shortly after halftime, while Solly March later got on the end of another long ball but his attempted lob went well over the bar.

Arsenal pressed for a late winner in stoppage time but were unable to break forward in enough numbers to breach Brighton’s steadfast defence.

Unai Emery’s side climbed into the top four, albeit briefly as fifth placed Chelsea, behind by only one point, take on Watford later on Wednesday.

“I’m a little disappointed. I think the first half was key in the match. We started winning and had another two chances, and they saved from Aubameyang,” Emery said.

“We didn’t concede (many) chances for them but they drew level. Second half we could not impose our game plan. We did not make more clear chances to win the match.”

Brighton remain 13th in the table but manager Chris Hughton felt the win had been his side’s for the taking.

“After a difficult start and going behind against a good team, we showed great character to get back in the game,” he told Sky Sports.

“I thought in the second half if there was a team going to score it was us, we were a bigger threat, Solly March probably has the best chance of the game.”

Dec 26 (Reuters) – Eden Hazard scored twice as Chelsea secured a 2-1 win at Watford on Wednesday to stay fourth in the Premier League.

After a home loss to Leicester on Saturday, Chelsea bounced back with a well-deserved win at Vicarage Road. They remain 11 points behind league leaders Liverpool.

The match, however, was overshadowed by the injury suffered by Watford defender Christian Kabasele, who crashed into the goalpost early in the game. Despite appearing to suffer a rib injury following the collision, he tried to continue but ended up being carried out of the grounds on a stretcher while being given oxygen.

Hazard opened the scoring in first half stoppage time when he rounded Watford ‘keeper Ben Foster and slotted home after being put through with a pass by midfielder Mateo Kovacic.

But Watford equalised moments before the break with a well-worked corner to Argentine midfielder Roberto Pereyra, whose superbly-timed volley from the edge of the box rocketed into the net for his sixth Premier League goal of season.

Hazard scored the winner from the spot early in the second half after being brought down by Foster.